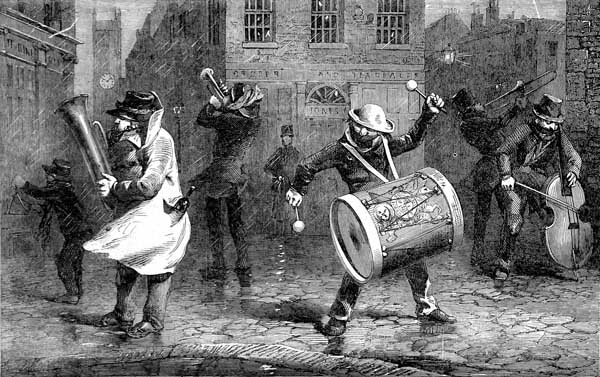 It might sound like it comes from an episode of Looney Tunes, but the 2017 Avie new release from The City Musick called “The Topping Tooters of the Town” is actually an historical title. The reference comes from an 1709 description of London’s civic musicians written by Ned Ward in his book called The London Spy. In it Ward says, ‘These are the topping tooters of the town, and have gowns, silver chains, and salaries, for playing “Lilliburlero” to my Lord Mayor’s horse through the city.’

These ‘topping tooters’ were actually better known as the City Waits. Although the old-fashioned term ‘wait’ had in earlier centuries referred to night watchmen, it had by the Elizabethan era evolved to describe an esteemed and highly skilled group of professional civic musicians who played for town ceremonies, theaters, entertainments, and even church services. Perhaps as a nod to the older form of the word “waits”, City Musick--the modern incarnation of the City Waits—opens their recording with a tune by Anthony Holborne called The Night Watch.

The City Musick’s recording explores and celebrates the repertory of the 16th and 17th century Waits band. They play recorders, shawms, dulcians, bagpipes, oboes, cornettos (including a tenor cornetto called a lysard) and sackbuts, in music by Holborne, Adson, Philips, and Morley.   City Musick plays Playford's Lilliburlero, a march tune with military associations, probably with roots in an Irish jig. It is widely known even still today as the signature tune of the BBC World service.  City Musick also plays several anonymous pieces, as well as arrangements of tunes with enticing names like Tinternell and Turkeylonley.

Besides civic responsibilities, Waits musicians also performed in theaters around London, including appearances in Shakespeare’s plays. Waits would have also played for masques and dances and other entertainments organized by the London gentry. This function of Waits Bands is reflected on this recording with Ayre 21 from John Adson’s Courtly Masquing Ayres of 1621, performed here by the City Musick with cornettos and sackbuts.

This new recording from the City Musick is chock full of a various and diverse catchy tunes, reflecting the many roles and wide reaching range of Waits musicians in 16th and 17th century London. Singers join the instruments for settings by Dowland, Allison, Stubbs and Ravenscroft from the The Whole book of Psalmes (also published in 1621). Their inclusion in the program suggests the role that Waits may have played in devotional settings in 17th century London.