A Toast To Two Renaissance Masters 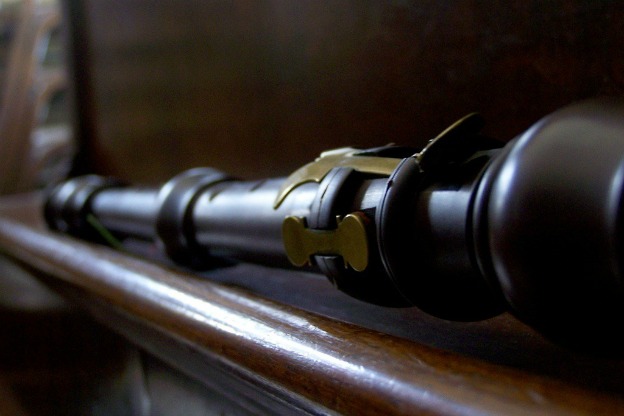 The year 2013 marks the 400th anniversary of Carlo Gesualdo’s death. The Italian nobleman became famous for his eccentricity, violence, and lifelong devotion to music. Upon his death in 1613, Gesualdo left behind six books of madrigals, collections of motets, instrumental works, and Tenebrae Responsories for Holy Week.

The year 2013 also marks the 450th anniversary of John Dowland’s birth in 1563. Let's listen to some of our favorites from Dowland’s extensive repertory of songs, solo lute music, and consort music to commemorate this date. Fretwork performs Lachrimae Antique—consort music from Dowland’s collection: Lachrime, or Seven Teares.

Dowland had a famous knack for melancholy! But, this is a birthday party, Mr. Dowland! And speaking of birthdays, it’s long been thought that Dowland—this most famous of English composers—might actually have been born in Ireland. Michael Slattery and the ensemble La Nef seized upon this idea in a project they called “Dowland in Dublin,” arranging the composers’ songs for a performance with a Celtic flavor.

Most of Dowland’s music is for his own instrument, the lute. Here’s a famous tune—one among many included in several books of his solo lute works. Nigel North performs Can she excuse my wrongs by John Dowland.

On February 24, 2013 the early music community lost one of its beloved members when Washington McClain, described as “a Buddha of the oboe,” died at the age of 52 in Windsor, Ontario. The first period instrument player to be featured in an article in Windplayer Magazine, Washington McClain, known affectionately as “Wash,” was a long-time member of Tafelmusik Baroque Orchestra, and principal oboist of l’Ensemble Arion of Montreal and Apollo’s Fire Baroque Orchestra of Cleveland. As a freelance musician, he played with many baroque orchestras and chamber ensembles in the US and Canada.

Washington McClain leaves a rich legacy of recordings made with many of the finest period instrument players in North America. Here he is with Michael McCraw playing the second movement of the Vivaldi Concerto in G Major for oboe, bassoon, strings and continuo from a recording made with Seattle Baroque.

McClain earned his Bachelor’s Degree from the Northeast Louisiana University and his Master's Degree at Northwestern University in Evanston, Illinois. He became one of America’s greatest baroque and classical oboe players, despite a very challenging childhood in the American South of the 1960s that could easily have led him in a very different direction. Let’s listen to Wash’s oboe playing in “Halcyon days” from Purcell’s The Tempest, or The Enchanted Island.

Washington McClain was a familiar and beloved figure at workshops and festivals all over North America, and at the Early Music Institute at Indiana University in Bloomington IN, where he had been an assistant professor since 2001. He was a brilliant musician and an inspirational teacher, yet there was much more to this gentle giant.

Within weeks of his move to the French-speaking part of Canada, Wash could make himself understood in French whether he was in Paris or Montreal - not a trivial accomplishment! And even some his colleagues were unaware that he was fluent in Greek and had a deep attachment to the Greek Orthodox Church. Whatever language he was speaking, Wash was a genial conversationalist who exuded warmth and an insatiable curiosity about the world and people around him.

His colleagues and students are unanimous in their love and admiration for Wash, saying such things as: “his spirit was as sensitive and diverse as the gamut of expression in Purcell's songs, and his elegant mind would have been the envy of any courtier at Versailles;” and  “What I will miss the most are his eyes. Washington's eyes could tell you a story with one look. He was a warm, fierce, regal and beautiful light of a human being.”

The music world was much enriched by his presence, and he remains with us through his recordings, his colleagues and his students.

Our featured release is a recording that turned out to be Washington McClain’s last: the 2012 CD called François Chauvon: Les Nouveau Bijoux, or "new gems." François Chauvon (fl 1710-1740) was an oboist and student of François Couperin, to whom he dedicated his set of suites and sonatas entitled Tibiades in 1717.

On the title page Chauvon specifies that some of the works are for flute and oboe, and some are sonatas for violin, but within the suites themselves he gives no indication of scoring for any individual movement. The performers, which include, Washington McClain, Alison Melville, Julia Wedman, Michael McCraw and Charlotte Nediger, look at this lack of specific information as a wonderful opportunity for creativity. Recorder and traverso join violin, oboe, bassoon and harpsichord in all sorts of combinations that offer a wide variety of timbres and textures.

Washington was a superlative musician. Elegantly expressive and adroit in technique, he had ‘ears’ so good I’m sure he could hear the grass grow. He was a paragon of integrity and professionalism, and he was also a mensch. Wash was serious and of strong opinion when he felt he needed to be, but he also had a smile that lit up the room and a deep sense of collegiality. I also loved him for his genuine, ongoing exploration of everything and anything that really brought the music off the page, especially with repertoire such as the Chauvon. He never got tired of wondering.