So many Christmas songs are about a snowy scene by the fireplace: “Walking in a winter wonderland,” “I’m dreaming of a white Christmas,” “Let it snow!” and many others. But don’t pour the hot cocoa just yet--this hour on Harmonia, we’re going outside, not into the snow, but to the pastoral, and probably warm, scene of the nativity. Plus, beautiful polyphonic choral music from Renaissance Spain, from the 2019 harmonia mundi recording “A Spanish Nativity,” by Stile Antico.

We heard the Gloria from the Missa Beata Dei genitrix Maria, performed by Stile Antico, from their 2019 recording A Spanish Nativity.

“And there were, in the same country, shepherds abiding in the field, keeping watch over their flock by night.”

So reads Luke chapter 2 verses 1-14 in the King James version of the bible. This sentence, and variations of it, have inspired Christmas music since the Middle Ages. Here it is in Gregorian chant, or plainchant, from the gospel reading of Luke during Christmas Midnight Mass.

Luke chapter 2, verses 1-14,  as sung in plainchant. We heard Schola Gregoriana of Cambridge with the Choristers of King’s College Cambridge directed by Mary Berry

“When Shepherds Watched their Flocks by Night,” by hymnodist Daniel Read, also known as the shape-note hymn “Sherburne,” from a CD called “In sweetest Union Join,” a historic recording of the United Sacred Harp Musical Association.

Sectarian divisions between Christians defined the Reformation—but ironically, Catholics and Protestants wrote a lot of music on the same topics. Anglican-born English composer Richard Dering converted to Catholicism while in Rome, but much of his music is still used by the Anglican and Episcopalian churches today. In “Quem vidistis, pastores,” shepherds are asked, “Who have you seen, shepherds? Speak: and tell us who has appeared on earth?” They answer, “We have seen the new-born child and a chorus of angels praising the Lord. Alleluia.” After that, we’ll hear motet “Pastores loquebantur” by Spanish Catholic composer Francisco Guerrero. Like Dering’s piece, Guerreo’s motet also depicts the nativity: Shepherds finding the baby Jesus in a manger along with Mary and Joseph.

“Pastores loquebantur,” by Spanish Renaissance composer Francisco Guerrero. Before that, we heard “Quem vidistis, pastores?” by English Tudor composer Richard Dering. The Sixteen were directed by Harry Christophers in their Coro 2018 release, A Renaissance Christmas.

Perhaps the most well-known musical setting of the nativity is from George Frideric Handel’s Lenten oratorio Messiah. Following the instrumental Pastoral “Pifa,” the quick succession of soprano recitative movements--starting with “There were shepherds” -- propels the listener towards the choral movement “Glory to God!”

We heard the The Pifa from Handel’s Messiah, an instrumental movement sometimes called the Pastoral Symphony—not to be confused with Beethoven’s, which is something completely different—followed by the angel recitatives and the chorus “Glory to God.” The soprano was Kerstin Avemo. Gary Graden directed St Jacobs Kammarkör and Rebaroque.

Welcome back! This hour, we’re listening to Christmas music for the nativity.

The Sinfonia from Part II of J.S. Bach’s Christmas Oratorio. The Mainz Bach Orchestra was directed by Ralf Otto.

“Pastorale,” “pifa,” “sinfonia,” and pieces that celebrate the nativity were not limited to short movements in large choral-orchestral works. Rather, starting with Corelli’s “Christmas Concerto,” many instrumental pieces were inspired by this theme. Mannheim composer Johann Stamitz’s “Sinfonia Pastorale” conveys outdoor elements at both slow and quick paces: a string-focused Larghetto, as well as a more sprightly Minuetto with horns and oboes.

We heard the Larghetto and Minuetto, from the Sinfonia Pastorale in D Major by Johann Stamitz. Concerto Köln performed, on their recording The Concerto Köln Christmas Album.

On our featured release this hour, we continue our nativity theme with a 2019 harmonia mundi recording by Stile Antico called, appropriately, A Spanish Nativity. Let’s begin with Tomas Luis de Victoria’s famous setting of the text “O Magnum Mysterium.”

We heard Victoria’s “O Magnum Mysterium,” performed by Stile Antico, from their 2019 recording A Spanish Nativity.

The emotional heart of this recording is Alonso Lobo’s Missa Beata Dei genitrix Maria. All five movements of the mass are featured, interspersed with other works for Christmas and Epiphany from the Spanish Golden Age.

We heard the Sanctus and the Agnus Dei from Alonso Lobo’s Missa Beata Dei genitrix Maria, from our featured release this hour, Stile Antico’s 2019 recording A Spanish Nativity. 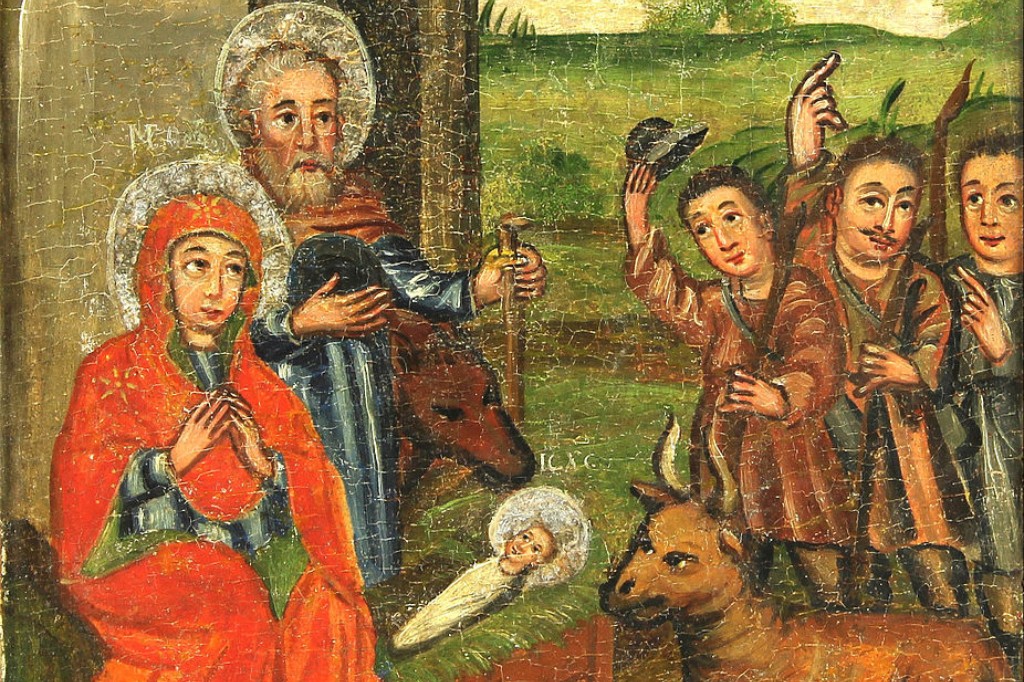 From a Ukrainian religious painting, from an iconostasis, showing the Adoration of the Shepherds, c. 1650. (Google Art Project, Wikimedia)

So many Christmas songs are about a snowy scene by the fireplace: “Walking in a winter wonderland,” “I’m dreaming of a white Christmas,” “Let it snow!” and many others. But don’t pour the hot cocoa just yet--this hour on Harmonia, we’re going outside, not into the snow, but to the pastoral, and probably warm, scene of the nativity. Plus, beautiful polyphonic choral music from Renaissance Spain, from the 2019 harmonia mundi recording “A Spanish Nativity,” by Stile Antico.