For many years, scholars believed that the so-called Medici Codex was compiled as a present for Lorenzo de’ Medici, Duke of Urbino, and the French noblewoman Madeleine de la Tour d’Auvergne, who married in France in the year 1518. But -- the story is not that simple. This hour, we’ll explore the history of this manuscript and bathe our ears in some of the most beautiful polyphony of the Renaissance.  Plus, music for clarinet by Johannes Brahms, played on historical instruments by Marie Ross, Petra Somlai, and Claire-Lise Deméttre, from a new release of Brahms’ Clarinet Sonatas and Trio on the Centaur label.

This beautiful music manuscript is the topic of our musical exploration this hour on Harmonia.

A library in Florence, Italy, the Biblioteca Medicea-Laurenziana, is the home of a handsome manuscript of music that we know today as the Medici Codex.  For many years it was thought to have been conceived and executed for the wedding of Lorenzo de’ Medici, Duke of Urbino, and the French noblewoman Madeleine de la Tour d’Auvergne which was held in France in  May of 1518. Its index takes the form of an acrostic bearing an inscription to Lorenzo, and the first opening of the book displays heraldic symbols of both the Medici family and Madeleine. But -- the Medici Codex was not created specifically for this wedding event.

In fact, strong evidence suggests that the Medici Codex was originally prepared for Lorenzo’s uncle, who reigned as Pope Leo X from 1513 to 1521.  The contents and the order were then customized to suit it to the happy couple, and the manuscript was presented to them, maybe by Leo himself, on their triumphant return to Florence on September 8, 1518, by which time word of Madeleine’s pregnancy had circulated in Rome.

Adrian Willaert, the second-best represented composer in the Medici Codex, wrote the piece that begins the collection - a motet, Virgo gloriosa, that includes a prayer to St. Margaret, the patron saint of childbirth.

The papal court was eager for every word of Madeleine’s condition. According to one writer, word of Madeleine’s pregnancy circulated in Rome as early as June. This news could well have set in motion the rather hurried production of the manuscript’s later additions.

Let’s hear another Willaert motet performed by the same ensemble, this one giving us a musical gloss on the well-known words of the angel Gabriel “Hail Mary, full of grace,” which we hear complete in the first part of the motet, at the words “Ave Maria gratia plena.”

Leo X staffed the papal choir with some of the most eminent singers and composers of his day, and he also maintained a private cadre of musicians that included several highly prized singers, composers, and instrumentalists. And, his awareness of musical developments extended well beyond Rome--he particularly admired the French royal chapelmaster Jean Mouton, the most influential composer of the day. Leo met Mouton in 1515, and named him to a highly honorific church position. Ten of the 53 motets in the manuscript are by Mouton, more than any other composer, and it has even been proposed that Mouton was the editor of the codex. Here is one of the motets:

Balance, poise, melodic elegance  – no wonder Leo thought so highly of Mouton! Once again, that was Capella Pratensis, this time performing Jean Mouton’s Exalta regina Galliae, on their 2010 CD Vivat Leo! Music for a Medici Pope from Challenge Classics.

The Medici Codex comprises the work of 21 composers. Some of their names will be familiar to the dedicated Harmonia listener, others perhaps less familiar. One of the latter group, Pierre Moulu is a composer about whom little is known, but he was associated with the French royal chapel at the same time as Mouton. We’ll hear a motet that is what we call an unicum, that is, it appears only in the Medici Codex, nowhere else. It’s first section names leading international musicians of the day – Dufay, Agricola, Obrecht and more. The second section concentrates on French chapel musicians, mostly minor figures apart from Jean Mouton and a mysterious mention of Heinrich Isaac, who has no known connection with the Paris court.

Welcome Back! We’re listening to music from the 16th century Medici Codex.

A composer of several pieces in the Medici Codex, Andreas De Silva, who despite his Latinized name was pretty surely a Frenchman, also remains an elusive figure. We catch sight of him in August 1514, passing through Ferrara.  His association with Leo clearly began not very long after that, but there is no trace of him in Vatican records until 1519, when we find him as one of Leo’s private singers and as ‘singer and composer’ in the papal chapel.

The five-voice Omnis pulchritudo Domini, built around a Gregorian melody for the Feast of the Ascension, shows Andreas at the top of his form, and illustrates well why Leo must have appreciated him. Listen, for instance, to the way he matches his harmonic palette to the meaning of the text. The final words of the piece, which translate as “God is gone up with a shout, and the Lord with the sound of the trumpet,” are set in what we today would describe as ‘major-key’ sonorities.

Joshua Rifkin directed the Capella Pratensis in Andreas de Silva’s Omnis pulchritudo Domini, once again from their 2010 Channel Classics CD Vivat Leo!        De Silva may not be that well-known a composer, but he writes swirling gestures with a rhythmic sweep that few composers of his time can match.

As we mentioned earlier, the Medici Codex seems to have been rather hurriedly reconstructed as a wedding present.  There are two scribes associated with the manuscript whose alternation follows no particular order, and the decoration of the codex ranges from lavish to rather drab. Similarly, though the manuscript is divided into four-part pieces and five-part pieces, they show no correlation with the index, which was arranged as an acrostic, and eight of the 51 pieces don’t appear in the acrostic at all. Yet two adjacent groups of pieces follow the acrostic exactly. Such a lack of regularity in appearance and physical structure is not what one would expect in a carefully planned book.

There is only one use of gold ink in the whole book.  This suggests that the original intention was to begin the manuscript with Josquin Des Pres’ Inviolata, integra et casta es, which appears about 2/3 of the way through the current manuscript and sports the gold ink.  Here, of course, we are talking about a masterwork of a master composer, Josquin, perhaps the most well-known today of the Papal singer/composers of the late fifteenth – early sixteenth century. Two thirds of the way into the manuscript . . . most famous composer . . . hmm. I’m tempted to think that the gold ink, usually used at the beginning, may here represent the golden ratio.

From the CD Motets by Busnoys, Josquin and Gombert, a 1991 Titanic release, that was Capella Alamire, directed by Peter Urquhart,singing Josquin’s Inviolata, integra et casta es, a five-voice motet begging for forgiveness from Mary, “the shining gate of heaven…kind mother, dearest to Christ.”

We’ll end our exploration of the Medici Codex with another stunning five voice motet by Josquin--this one also found elsewhere, including a publication from 1545, long after Josquin’s death.  Nymphes des bois (“bwey”) (or, “bois” in modern French), is the only motet in the collection that is not in Latin. It’s also the only one to be notated in solid black notes—for it’s a lament mourning the death of Josquin’s “good father,” Johannes Ockeghem, quote “the true treasurer of music and master, Learned, handsome and by no means stout.”  As in the Moulu motet we heard earlier, other famous composers of the day are mentioned by name, in this case Josquin himself, Brumel, Compère and possibly Pierre (de la Rue?). A second, simultaneous text says, “Eternal rest grant unto them, O Lord, and let perpetual light shine upon them,” a chant drawn from the Latin requiem mass.

We turn now to our featured release of the week . . . a recording of music of Johannes Brahms. You might be asking yourself “wait, I thought this was an early music program,” the term early music usually indicating repertoire associated with the medieval, renaissance, and baroque periods. But many of us quote “early music” performers actually prefer to use the term “historical performance.” The study of the techniques, instruments, and performance contexts of historical music is in many ways more about process than about specific repertoire, and many practitioners of historical performance have expanded their repertoire into the 19th century and beyond.

In the case of this CD, entitled simply “Johannes Brahms: Clarinet Sonatas and Trio,” clarinetist Marie Ross, pianist Petra Somlai, and cellist Claire-Lise Deméttre perform the music of Brahms on historical instruments. We are told in the CD notes that the two clarinets played by Marie Ross were made in the 1890s and in 1905 by a maker named Oskar Oehler, the latter for a player who had been in the same orchestra as Richard Muhlfeld, who had been Brahms’ favorite clarinetist, and for whom these chamber pieces were written. The cello’s gut-strings, bridge construction, and lack an end-pin are characteristic of the practice of the time, and the piano is an 1875 Steinway – the type of piano that Brahms used to specifically request when doing concert tours in that time period. 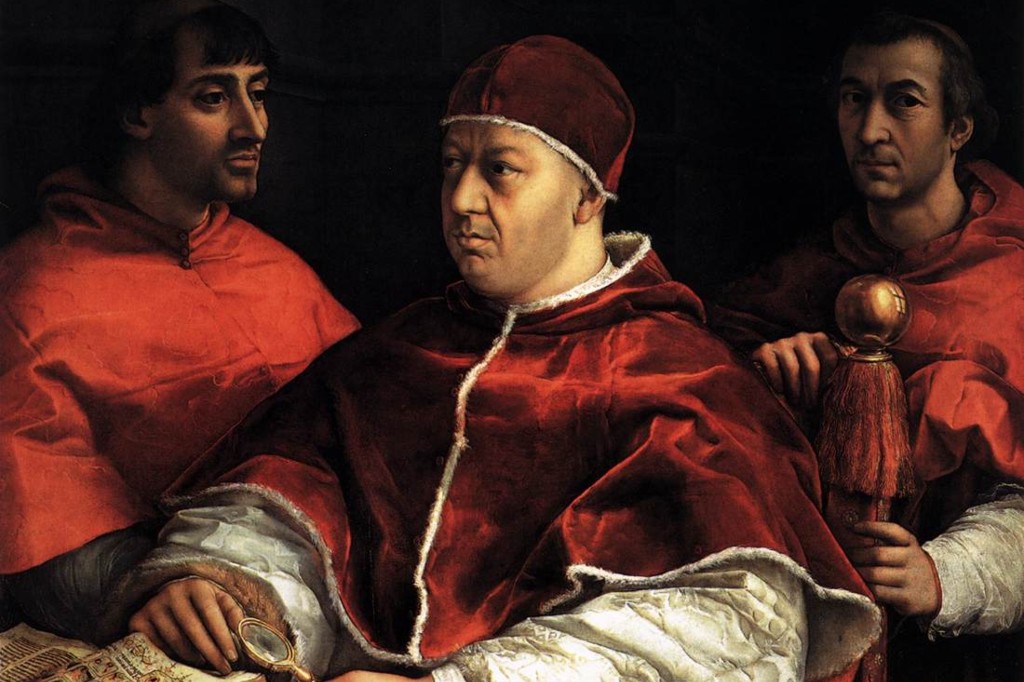 For many years, scholars believed that the so-called Medici Codex was compiled as a present for Lorenzo de’ Medici, Duke of Urbino, and the French noblewoman Madeleine de la Tour d’Auvergne, who married in France in the year 1518. But…the story’s not that simple. Strong evidence suggests that the Medici Codex was originally prepared for Lorenzo’s uncle.

This hour, we’ll explore the history of this manuscript and bathe our ears in some of the most beautiful polyphony of the Renaissance.

Plus, we’ll hear music for clarinet by Johannes Brahms, played on historical instruments by Marie Ross, Petra Somlai, and Claire-Lise Deméttre, from a new release of Brahms’ Clarinet Sonatas and Trio on the Centaur label.