The Master of the Notes: 500 Years of Josquin des Prez

Even 500 years after his death, Josquin des Prez looms large in our musical memory. Martin Luther himself once said quote “Josquin is the master of the notes.” This hour, we’ll explore music by this Franco-Flemish composer and musicians he influenced. Later in the program, we’ll hear siblings Augusta and Georgina McKay Lodge perform elegant eighteenth-century chamber works for violin and viola on our featured recording J.G. Graun: Chamber Music from the Court of Frederick the Great.

Fuit homo missus a Deo, “There was a man sent from God,” from the motet  “In principio erat Verbum” by Josquin des Prez. Daniel Reuss conducted Capella Amsterdam. We’ll hear both mournful and joyful music by this Franco-Flemish master of late 15th and early 16th century polyphonic music, coming up.

Half a millennium after his death, Josquin des Prez looms large in our musical memory. His mastery of high-Renaissance polyphonic style remains as captivating to today’s artists and audiences as they were to the listeners and performers in his day. On hearing some of Josquin’s music, Martin Luther called Josquin, [quote] “the master of the notes, which must do as he wishes, while other composers must follow what the notes dictate. He most certainly possessed a great spirit.”

Here’s the Gloria from Josquin’s setting of his Missa de Beate Virginie. The music for this Gloria was widely distributed, and was heard even more often than the rest of Josquin’s mass.

Josquin’s four-voice motet “Ave Maria … virgo serena” was so well-known in his day that the printer Ottaviano Petrucci, the first publisher of music printed in movable type, included it as the first motet in his 1501 Motetti A.

Petrucci’s choice to publish Josquin’s twenty-year-old motet tells us something, since most other pieces in the publication were much newer. Here is Josquin’s “Ave Maria … virgo serena” followed by a dance: “Bergerette, savoyenne,” arranged for chamber ensemble.

You can hear highlights from recent and archived concert recordings of early music on our podcast, ​Harmonia Uncut ​-- curated and hosted by Wendy Gillespie. Listen online at harmonia early music dot org and through iTunes.

Although there are still gaps in Josquin’s biography, it’s certain his music was well known during his life and soon after, and not just in France and the Low Countries. Josquin’s music was all the rage in mid-to-late fifteenth-century Spain. His works were copied in Spanish cathedrals and sold in instrumental music compilations. Tomás Luis de Victoria was familiar with Josquin’s music. Victoria’s Missa Gaudeamus has compositional similarities to Josquin’s mass by the same title. We’ll hear the Agnus Dei from Victoria’s Missa Gaudeamus.

Josquin des Prez wrote serious music for the church, but he also knew what was popular—and able to move patron’s hearts as well as empty their coin purses.  And in the early 1500s, sadness, mourning, and melancholy were the pastime of painters, writers, and composers. Artists remembered their patrons, other artists, and people from literature, the bible, and mythology. In Josquin’s “Nimphes nappés,” the speaker asks nymphs and dryads to mourn. Josquin himself was memorialized in pieces of remembrance after his death. Nicolas Gombert sets “Musae Jovis,” based on a poem by Avidius Novionensis in memory of Josquin. It begins,

Let the cypress retain its foliage:

Josquin himself is dead,

the glory of the temples,

and your glory too

you who deprive the temples of sweet sounds,

and the princely courts also,

We move ahead in time a bit now, to our featured release: J.G. Graun: Chamber Music from the Court of Frederick the Great. Brothers Johann Gottlieb Graun and Carl Heinrich Graun were employed by Frederick the Great. The older of the two, Johann was praised for his skill on the violin, but it was Carl Heinrich who became the more well-known composer. Here is the second movement, Allegro non troppo, from Johann Gottlieb Graun’s Viola Sonata in C Minor.

Johann Gottlieb Graun and his brother Carl Heinrich both worked for Frederick the Great. This recording, too, features a dynamic duo of siblings: violinist Augusta and violist Georgina McKay Lodge. We’ll hear them duel it out in a Trio Sonata by Johann Gottlieb Jantisch, who was also in King Frederick’s employ.

Two movements, “Adagio” and “Allegro assai,” from Trio Sonata in G Minor by Johann Gottlieb Jantisch featuring sisters Augusta McKay Lodge and Georgina McKay Lodge performing on violin and viola, from their recording J. G. Graun: Chamber Music from the Court of Frederick the Great, released in 2021 on the Ricercar label.

The writer for this edition of Harmonia was Sarah Huebsch Schilling.​

Thanks to our studio engineer Michael Paskash, and our production team: LuAnn Johnson, Aaron Cain, Wendy Gillespie, and John Bailey. I’m Angela Mariani, inviting you to join us again for the next edition of Harmonia. 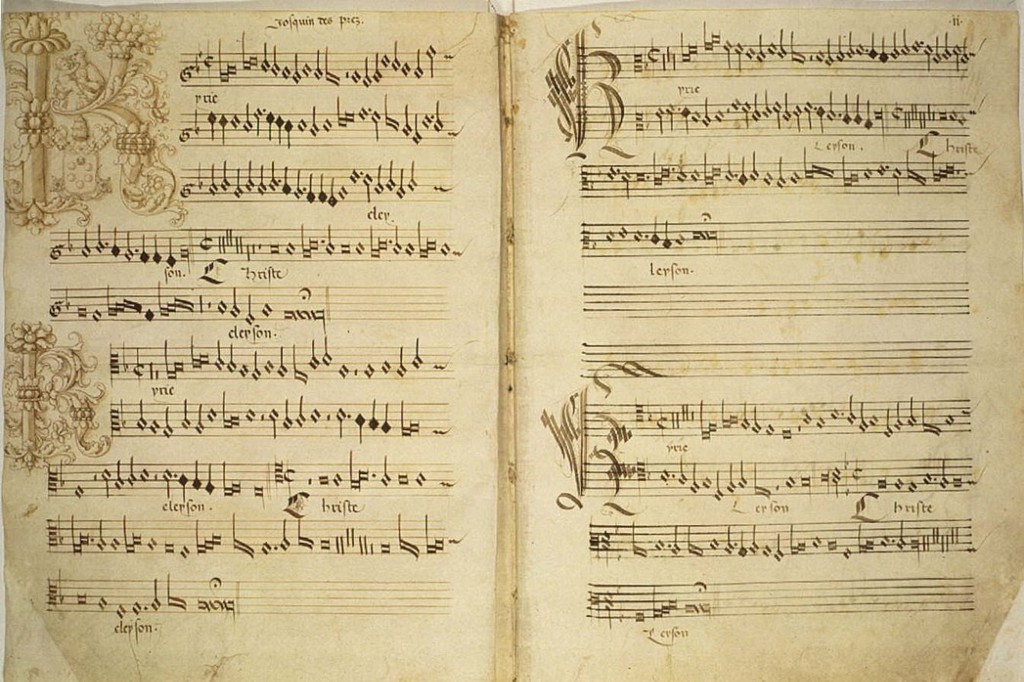 Even 500 years after his death, Josquin des Prez looms large in our musical memory. Martin Luther himself once said quote “Josquin is the master of the notes.” This hour, we’ll explore music by this Franco-Flemish composer and musicians he influenced. Later in the program, we’ll hear siblings Augusta and Georgina McKay Lodge perform elegant eighteenth-century chamber works for violin and viola on our featured recording J.G. Graun: Chamber Music from the Court of Frederick the Great.