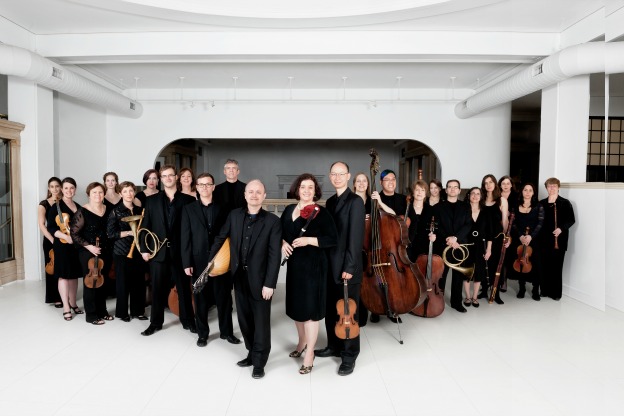 Today's podcast is all about a composer named Fasch and an orchestra who has recently championed performances of his music, the Philadelphia-based ensemble Tempesta di Mare. We're listening to their 2012 recording of Fasch Orchestral Works, the third in a series on the Chandos label.

It’s a sound that certainly grabs the attention! Fasch’s D major orchestral suite calls not only for a full complement of strings and continuo, but also pairs of horns and oboes, a bassoon, timpani, and three trumpets! It’s in some ways like Handel’s Water Music, or maybe Bach’s 4th orchestral suite.

Fasch was, in fact, a contemporary of J.S. Bach, and we know that Bach admired Fasch’s music enough to copy out some of his pieces.

Like Bach, a great deal of Fasch’s career was devoted to writing church cantatas, but relatively few of these survive. Of the music by Fasch that does remain, most is instrumental. Although never published during his lifetime, several Fasch manuscripts have been preserved in Dresden and Darmstadt. But these didn’t weather the past 300 years unscathed. So when artistic directors of Tempesta di Mare, Gwyn Roberts and Richard Stone, first decided to record these pieces, they faced a challenge.

During WWII, in an attempt to save library resources from the 1945 Allied bombings, many historical treasures in the Dresden library, including Fasch’s music, were moved to underground vaults. But those vaults flooded, severely damaging the manuscripts. I guess we’re lucky that Fasch used good quality ink when he wrote down the notes in his music. The only problem is that the staff lines, which tell where those notes are supposed to go, completely came out in the wash. So the trick, explains Richard Stone, who has prepared performing editions of the parts, lies in figuring out where those staff lines are supposed to be.

Early musicians have been performing and recording Fasch here and there for a while, but part of the excitement about this series of recordings from Tempesta di Mare is that they are part of a full-blown Fasch revival. Four out of six of the pieces on this CD are premiere recordings including the D major concerto.

I think what I like most about the music by Fasch is the way he uses a variety of instrumental resources, especially winds.  And somehow, that variety comes across more clearly on this volume 3 release from Tempesta di Mare than their first two volumes in the series. This one was for me was the most engaging of the set. Tempesta has always been good, and they have only gotten better as they dig more and more deeply into the orchestral music of Johann Friedrich Fasch.

Link to the International Fasch Society

Here's a video of a live performance by Tempesta di Mare.

Image of  Dresden after the 1945 bombing.