Welcome to Harmonia…I’m Angela Mariani. The cornetto’s tone quality was often described as being close to the human voice, especially that of the prized boy soprano. (French polymath Marin) Mersenne wrote that the cornetto was “like a ray of sunshine piercing the shadows, when heard with the choir voices in the cathedrals or chapels.” This hour, we’ll explore the magical sound of the cornetto both with a choir of voices and as a virtuoso instrument. Plus, our featured recording is A Delicate Fire: Music of Barbara Strozzi.

As an instrument the cornetto inhabits a space between woodwind and brass—and with a magically vocal quality, too. The slim, typically curved, wooden body covered in leather has six finger holes and a thumb hole, near the top. A cupped mouthpiece made of  ivory, ebony, or horn is placed in the top, where the player buzzes—much like a trumpet or horn. Let’s hear a mid-seventeenth-century piece that features this instrument, along with soprano, violin, and basso continuo. Here is “Labbra gradite” by Italian baroque composer Alessandro Scarlatti.

Alessandro Scarlatti’s “Labbra gradite” was performed by Hana Blažíková, soprano and Bruce Dickey accompanied by strings and continuo on our featured instrument: the cornetto.

The cornetto was in peak use during the sixteenth and seventeenth centuries, especially in cathedrals where it was prized for its ability to mimic the sound of the human voice. Cornetto players were known for their masterful ability in a type of ornamentation called diminution. In this practice, the performer breaks up a simple melodic line into more florid figures. It is the musical equivalent of starting with a round circle and folding and cutting it so you end up with a wonderfully complex snowflake. Modern cornetto master Bruce Dickey works his diminutions into the motet “Dilectus meus mihi” by Giovanni Pierluigi da Palestrina.

“Dilectus meus mihi” by Palestrina, performed by Bruce Dickey on the cornetto with soprano Hana Blažíková.

Although the cornetto is typically a wooden instrument with a bend, there are also straight and mute cornetti, which were less common than the curved cornetto. Like the curved cornetto, the straight treble cornetto is also made of wood, though it isn’t covered in leather, and it is typically more plain in appearance. It was most used in Germanic lands, especially before 1550. We’ll hear “Sonata seconda” by Austrian baroque composer Johann Heinrich Schmelzer.

Welcome back. We’re exploring the magical sound of the cornetto. In addition to its virtuosic ability, the cornetto was prized for its ability to blend with the human voice. It was used with ensembles of voices, sackbuts, dulcian, strings, and keyboard. The San Marco [Basilica] in Venice often employed cornetto players, especially under Italian master Giovanni Gabrieli. We’ll hear “Quem vidistis pastores”(Whom did you see, shepherds) from Gabrieli’s 1615 Symphonia Sacrae.

Music by Gabrieli; that was “Quem vidistis pastores” performed by the Taverner Choir and London Cornett and Sackbut Ensemble directed by Andrew Parrott.

Use of the cornetto declined in the eighteenth century. Still, several composers, including Johann Sebastian Bach, used cornetto—usually to reinforce the choir. We can hear this in Bach’s cantata 133, “I rejoice in you,” where the cornetto doubles the soprano voice in the opening and final choruses. Here is the opening chorus from Bach’s cantata 133.

The opening chorus from Johann Sebastian Bach’s cantata 133, “I rejoice in you,” “Ich freue mich in dir.” The Amsterdam baroque Orchestra and Choir was led by Ton Koopman.

Our featured release this hour is A Delicate Fire: Music by Barbara Strozzi, performed by Pinchgut opera, directed by Erin Heylard, a 2020 release on the Naxos label. Strozzi was a trailblazer. She published eight volumes of work within her lifetime—an unusual feat for a woman in the seventeenth century. She made a living as a composer without the patronage of the church or a court. She rose to prominence in a world of men: Venice’s intellectual elite. Many of Strozzi’s works are dedicated to prominent women of her day, including her first book of madrigals, which is dedicated to Vittoria della Rovere, Grand Duchess of Tuscany.

Strozzi’s presence among the intellectual elite in Venice brought criticism, as did the fact that she was a musician, had four children, and was not married, although she was in a long-term relationship with a patron named Vidman. There is also evidence of a long friendship with a castrato singer.  She was often slandered; one critical contemporary, after she gave out flowers to one of her accademia audiences,  said “It is a fine thing to distribute the flowers after having already surrendered the fruit.” How sad that with all of her accomplishment, it is quotes like these that are remembered—but it’s a reflection on the very narrow boundaries of what was considered to be an acceptable lifestyle for a woman in her day. Still, she sang at academic gatherings, and her work reached the ears of prominent Italians of her day. Most of her works are for solo soprano and continuo, including this one, dedicated to “Nicolò Sagredo, procurator of San Marco and future Doge of Venice”—the dramatic  “Lagrime mie,” “My tears, lament,”

“My tears, lament,” from Barbara Strozzi’s 1659 collection of arias and cantatas. Anna Dowsley sang with the Pinchgut Opera led by Erin Heylard.

Barbara Strozzi was a fine composer and a very important contributor to the development of the cantata. Had her gender been different, would she have been counted among the important composers of secular music in her day, rather than having to be rediscovered 300 years later? I think we can guess the answer. We know very little about the last part of Strozzi’s life, or whether she continued to compose. We leave you with the conclusion to Strozzi’s first book of madrigals: here’s soprano Anna Dowsley, tenor Nicholas Jones, and bass Andrew O’Connor performing with Pinchgut Live from their 2020 Naxos release A Delicate Fire. 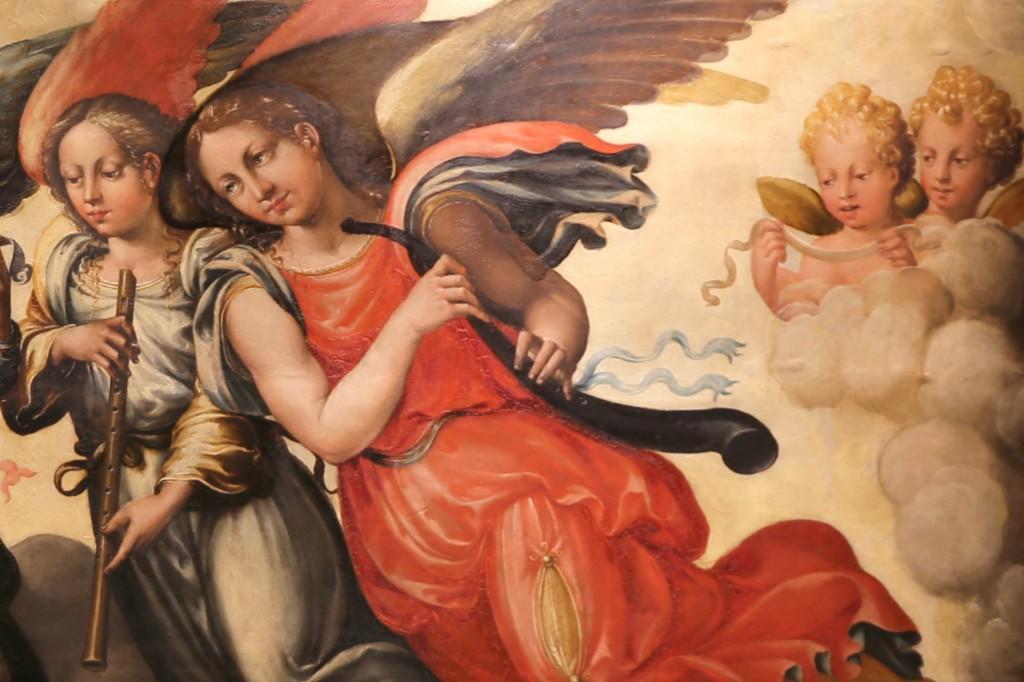 The cornetto’s tone quality was often described as being close to the human voice, especially that of the prized boy soprano. French polymath Marin Mersenne wrote that the cornetto was “like a ray of sunshine piercing the shadows, when heard with the choir voices in the cathedrals or chapels.” This hour, we’ll explore the magical sound of the cornetto both with a choir of voices and as a virtuoso instrument. Plus, our featured recording is A Delicate Fire: Music of Barbara Strozzi.