The National Library of Scotland holds a manuscript from the first half of the sixteenth century that is the largest surviving collection of Scottish sacred polyphony of the time. Within it are all the known works of the composer Robert Carvor, who was also the copyist of the manuscript, which interestingly contains nearly twice as many pieces that are unascribed. One of them is a Mass with the wonderfully catchy title Missa Horrendo subdenda rotarum machinamento, which we’ll hear later in the program on our featured release, Hyperion’s 2021 Music for the King of Scots, by the Binchois Consort, directed by Andrew Kirkman.

The Collegium Aureum played three dances by Pierre Attaingnant - a tordion, a pavane, and a galliarde - on their 1962 recording Music from the Renaissance-- wonderful early example of early-music performance that turned a considerable number of people on to early music!

The National Library of Scotland in Edinburgh is a safe haven for a manuscript that has seen difficult days. No gold. Little decoration apart from large red initials. Some pages stuck together, others missing—but 27 pieces survive reasonably well, most of them not found anywhere else.

Long known as the Scone [SKOON] Antiphonary, it was laid out in choir book format, with individual parts written on different parts of the page. More than half of the book’s contents are pieces by Robert Carvor; and it’s entirely likely that Carvor himself was the copyist during the first half of the sixteenth century, so the book has been re-dubbed the “Carvor Choirbook.”

Early music aficionados will smile patiently upon hearing that we know almost nothing about Robert Carvor - he entered holy orders at the Augustinian abbey at Scone (SKOON) when he was 16. We know that he signed a document in 1568 . . . and we know precious little else about the intervening years. But perhaps his music will give us a hint.

Let’s hear what is probably Carvor’s best known piece, having appeared in a modern edition in 1959.  Here Carvor sets a traditional Latin hymn as an epic 12 ½ minute motet in 19 parts, O bone Jesu.

Carvor also does smaller scale pieces. His 4-part Missa ‘L’homme armé’, which may date from around 1520, is one of many masses based on the famous French popular song ‘L’homme armé’, but Carvor’s is the only British example. Smaller scale writing, but still very challenging vocally!

That was the Gloria from Carver’s Missa L’homme armé, this time from Capella Nova’s Robert Carver Vol. 2. Alan Tavener is the director.

You can hear highlights from recent and archival concert recordings of early music on ​Harmonia Uncut ​-- our biweekly podcast, curated and hosted by Wendy Gillespie. Listen online at harmonia early music dot org and through iTunes.

Welcome back. We’re listening to music from the “Carvor Choirbook.”

Near Robert Carver’s Missa L’homme armé in our choirbook, we encounter Guillaume Dufay’s well-known Missa Se la face ay pale, dating from a century before, around the 1430s. . Let’s bathe in its flowing Kyrie performed by singers and instrumentalists of Cantica Symphonia.

Giuseppe Maletto directed Cantica Symphonia in the Kyrie from Dufay’s Missa Se la face ay pale on their 2014 release The Masses for 1453.

­Let’s return now to Robert Carvor for a piece that appears in the manuscripts near that first gigantic motet we heard at the beginning. This is the Sanctus (and I emphasize, only the Sanctus, without its attendant Benedictus, for the sake of time) from a 10-part Mass that Carvor mentions he wrote when he was 23.

The ornate Sanctus from Robert Carvor’s Missa Dum sacrum mysterium was sung by The Sixteen, directed by Harry Christophers, on Music of Scottish Renaissance. Wow, young Carvor was certainly out to prove himself, don’t you think?  And wasn’t this just around the time that, in contrast, the Council of Trent was demanding that liturgical music be simplified? Interesting.

We turn now to our featured release this hour, the 2021 Hyperion recording Music for the King of Scots by the Binchois Consort,  directed by Andrew Kirkman. Nearly all the polyphony on their recording is drawn from our manuscript, the “Carvor Choirbook,” but there is not a single piece by Robert Carvor - at least, not as far as we know, for even though Carvor is the copyist, the mass at the center of the recording is unattributed.

A great deal of research has gone into this recording, notably an attempt to recreate—virtually—the architecture, interior decoration, and acoustics of a Scottish chapel in which James IV spent a good bit of time, and then recording the music into this virtual space. We’ll include a link in our web post with more information about this project …but in the meantime, let’s listen to this anonymous, yet character-filled music.

The Sanctus and Benedictus from the anonymous Missa Horrendo subdenda rotarum machinamento, The centerpiece of the Binchois Consort’s CD Music for the King of Scots. The mass is based on a responsory for St. Katherine of Alexandria, a virgin martyr second only to the mother of Christ on the medieval list of “most-venerated women.”

The Latin title’s “terrible machinery of wheels” refers to the spiked breaking wheel on which the teenage Katherine was condemned to death, but which shattered at her touch, leaving a furious emperor with no choice but to behead her. There are legendary reasons that Katherine is associated with Scotland, and the anonymous Mass is now thought to be one of the oldest surviving Mass cycles of Scottish origin. We’ll end with the Agnus Dei of this hauntingly strange mass.

The Binchois Consort, directed by Andrew Kirkman, sang the Agnus Dei of the Missa Horrendo subdenda rotarum machinamento on our featured release, the 2021 Hyperion recording Music for the King of Scots.

Thanks to our studio engineer Michael Paskash, and our production team: LuAnn Johnson, Aaron Cain, Wendy Gillespie, and John Bailey. I’m Angela Mariani, inviting you to join us again for the next edition of Harmonia. 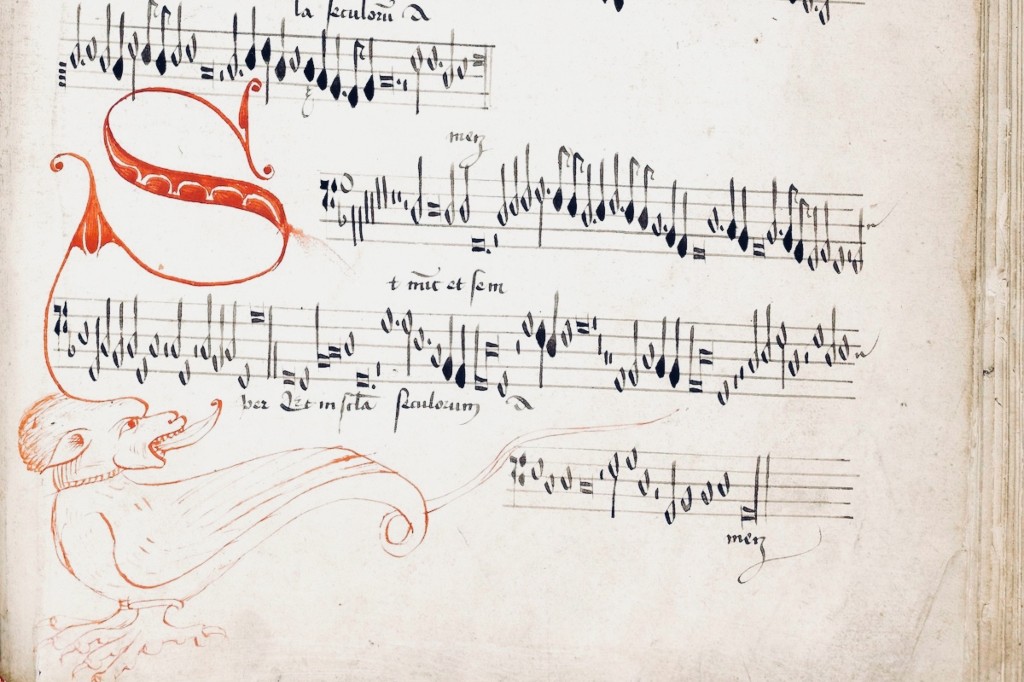 From a page in the Carvor Choirbook. (National Library of Scotland)

The National Library of Scotland holds a manuscript from the first half of the sixteenth century that is the largest surviving collection of Scottish sacred polyphony of the time. Within it are all the known works of the composer Robert Carvor, who was also the copyist of the manuscript, which interestingly contains nearly twice as many pieces that are unascribed. One of them is a Mass with the wonderfully catchy title Missa Horrendo subdenda rotarum machinamento, which we’ll hear later in the program on our featured release, Hyperion’s 2021 Music for the King of Scots, by the Binchois Consort, directed by Andrew Kirkman.