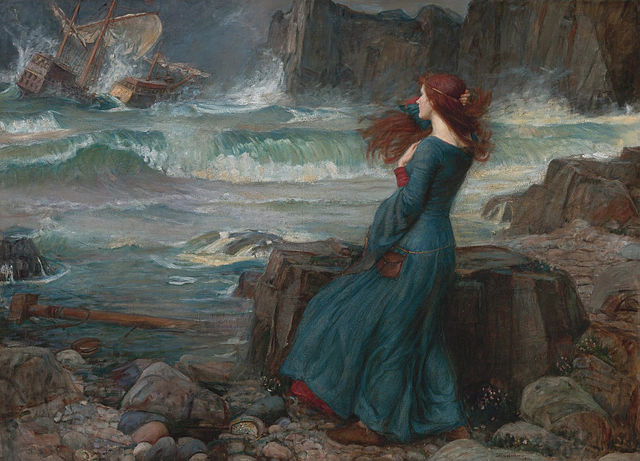 "Be not afeard; the isle is full of noises, Sounds and sweet airs, that give delight and hurt not." Sometimes called The Enchanted Island, The Tempest is one of Shakespeare's most inherently musical plays. From pipe and tabor to Classical orchestra, the spirit Ariel soars with sweet melodies. We'll explore sounds inspired by The Tempest, including music by Thomas Linley, Jr., in a featured release recorded by the Parley of Instruments Baroque Orchestra and Choir, directed by Paul Nicholson.

Instrumental music from The Tempest Suite, composed by Matthew Locke, from the recording Locke: Music for the Tempest. We heard two dances from Locke's suite: "A Martial Jigge" and a saraband. Giovanni Antonini conducted the ensemble Il Giardino Armonico.

We enter William Shakespeare's play The Tempest in the middle of a sea storm. We cannot see the storm, but we see the sailors respond in distress as we imagine a horrific tempest. Among the sailors is the prince of Naples, Ferdinand, who laments the supposed death of his father, Alonso, in the storm. In the second scene of the play, the spirit Ariel sings "Full Fathom Five." The text begins,

Of his bones are coral made;

Those are pearls that were his eyes."

Let's listen to Thomas Morley's setting of "Full Fathom Five." An Elizabethan composer, Thomas Morley wrote songs for many of Shakespeare's plays. Morley's setting of "Full Fathom Five" was likely actually sung in early productions of The Tempest and may even have been sung at the very first performance of the play on All Hallows' Day, November 1, 1611.

We heard Thomas Morley's setting of Shakespeare's text, "Full Fathom Five." That track was from the recording All the World's a Stage.It was performed by the ensemble Musica Donum Dei, under the direction of Michael Overbury.

Towards the end of The Tempest, Ariel sings a cheerier tune than the one we just heard, anticipating his coming freedom from his master Prospero. We'll hear music by another Elizabethan composer, Robert Johnson, his setting of Shakespeare's text, "Where the Bee Sucks."

That was "Where the Bee Sucks," from The Tempest, set to music by Robert Johnson, and performed by Musica Donum Dei.

Although we have original music for "Full Fathom Five" and "Where the Bee Sucks," the original tunes for most of the music in The Tempest do not survive. Ross Duffin presents texts from The Tempest, paired with appropriate tunes, in his recording Shakespeare's Songbook. We'll hear "The Master, The Swabber, The Boatswain, and I." This song was considered so profane that the vulgar lyrics were frequently altered or censored throughout the 18th and 19th centuries. We'll hear four short songs, paired with tunes that would have been familiar to Elizabethan English audiences.

We heard songs from The Tempest, from the recording Shakespeare's Songbook. Performers on that recording included singers Paul Elliott, Ellen Hargis, and Aaron Sheehan, with Paul O'Dette on lute and Renaissance guitar.

Sometimes, musical interjections in theatrical performances were kept very short, so as not to interrupt the flow of the plot too much. We'll listen to two such musical interludes. First, we'll hear pipe and tabor, played by the spirit Ariel as he says to his master, Prospero:

"Then I beat my tabour;

Advanced their eyelids, lifted up their noses

As they smelt music."

Then, we'll listen to a catch sung by the drunken sailors Trinculo and Stephano with the slave Caliban.

That was "Entrance of the Players: Pipe and Tabor," from An Elizabethan Evening,performed by The Jaye Consort. Before that, we heard "Flout 'em and Cout 'em," from Shakespeare's Songbook, sung by Paul Elliott, William Hite, and Aaron Sheehan.

For much of the seventeenth century, English theaters were closed. Many factors contributed to this, including the rise of Puritanism, the English Civil War, and the Commonwealth government. Charles II resumed the throne in 1660, ushering in the Restoration. In art, this period was marked by a revival of theater, art, music, and dance. Writers John Dryden and William Davenant reimagined old masterpieces, including Shakespeare's The Tempest. Sometimes called The Enchanted Island, their version of The Tempest was popular from the time of its premiere in 1667, through the mid-eighteenth century. The Enchanted Island used music by several composers including Matthew Locke. Let's listen to some music from that production.

That was instrumental music from Locke: Music for The Tempest, from the 2014 recording by the ensemble, Il Giardino Armonico, directed by Giovanni Antonini.

Earlier this hour, we heard music by Matthew Locke written for a Restoration version of Shakespeare's The Tempest, entitled The Enchanted Island. Next, we'll hear some music written for a later production of The Enchanted Island. One 1712 performance featured music by several composers, including John Weldon. Like other Restoration settings of The Tempest, Weldon's pieces have frequently been attributed to Henry Purcell.

That was music from the recording Cease Anxious World,written by Henry Purcell. It was performed by the ensemble Le RÃªveuse,Â directed by Benjamin Perrot. Before that, we heard John Weldon's version of "Full Fathom Five," fromÂ a recording by the Folger Consort.

Born in the Covent Garden section of London, Thomas Augustine Arne was never far from the theater. Arne's version of "Where the Bee Sucks" was published in Lyric Harmony, where the song was titled "Ariel's Song in The Tempest." This volume was for sale in Vauxhall Gardens, which suggests that Arne's setting was intended mainly for concert and home enjoyment rather than theatrical use. In this recording, the role of Ariel is sung by a man.

That was Thomas Arne's "Where the Bee Sucks" performed by Musica Donum Dei.

If you've heard of the composer Thomas Linley, "The Younger," then you are probably either a theater music expert or particularly interested in odd composer deaths. Young Tom Linley, known as the "English Mozart," passed away in 1778, at just twenty-two. While on vacation in Lincolnshire, Linley went on a boat ride with two friends. Reports indicate that a storm ensued, and while attempting to swim to shore, Linley drowned. It is fitting therefore that we remember Linley for his Music in the Tempest, which premiered at Drury Lane Theater in 1777. We'll hear Linley's overture and chorus, "Arise ye spirits of the storm."

Music for The Tempest, by the composer Thomas Linley, Jr., performed by The Parley of Instruments Orchestra and Choir, directed by Paul Goodwin.

Like many other 18th century musical settings of Shakespeare's works, Thomas Linley, Jr.'s Music in the Tempest uses some non-Shakespearean texts. One of these is "O bid your faithful Ariel fly." "O bid" is a virtuosic work for both singer and oboist. Performers at the premiere performance of Linley's Music in The Tempest were soprano Ann Field and oboist John Parke. The role of Ariel in The Tempest marked Ann Field's London stage debut. The role made her famous, and she played it for almost a decade!

Let's listen to "O bid your faithful Ariel fly," and "Come unto these Yellow Sands."

We heard two pieces from Thomas Linley, Jr.'s Music in the Tempest, performed by The Parley of Instruments Orchestra and Choir, directed by Paul Goodwin.

The writer for this edition ofÂ HarmoniaÂ isÂ Sarah Huebsch.