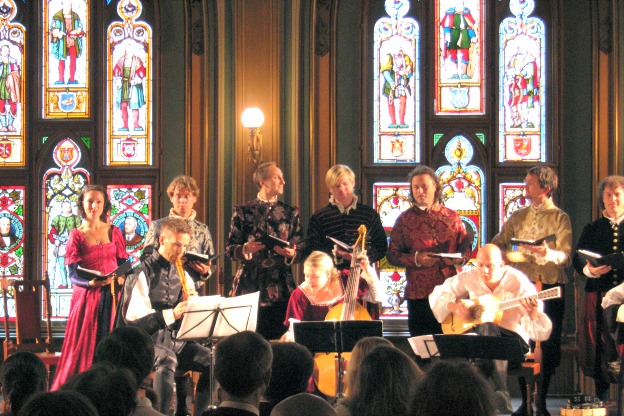 Formed in 1995, the Swedish Ensemble Villancico  originally focused on early music that had ties to the Nordic region. But in recent years, their focus has turned to music from Latin America, and several of their recordings feature this region and its repertory.

Their most recent 2013 cpo release called Tambalagumbá! bears the subtitle: “early world music in Latin America,” a phrase the CD’s liner notes define as “the ample presence of multi-ethnic values and inter-continental relations in one and the same region.”

Maybe the best example of the convergence of music and cultures on this recording is the Zarambeques. This dance music was composed by the Spanish musician Santiago de Murcia  whose music has been preserved in the 1730 Saldivar Codex in Mexico. As Peter Pontvik, director of Ensemble Villancico writes, the piece is a reminder of  how “…African culture, filtered by the Latin American experience, exerted its influence and was reproduced in the West and then once again crossed the ocean…”

Early world music? Yes, this piece was certainly a globetrotter!

The social, racial and political climate in Latin America, with European settlements on indigenous lands and the introduction of slaves from Africa, was one of great conflict and tension. Cultures shifted and changed in each other’s wake, and a rough process of assimilation began. The music on this recording reflects these struggles in the New World.

The text of Fuera, Fuera, a villancico from 1718, is set here by the Bolivian Roque Jacinto de Chavarria in a combination of Spanish and the native Quechua. The story depicts the Spaniards and the Indians visiting the Christ-child in Bethlehem with dialogue that reflects attitudes of the day.

Another track on this CD offers quite a contrast. Transplanted from European traditions, we hear the sacred Latin work Tristis est anima mea by the Mexican composer Juan de Lienas, who flourished in the early to mid 17th century. The text refers to the Gospel of Matthew and the words of Jesus in the Garden of Gethsemane just before his arrest. This sacred polyphonic setting directly reflects the influence of Catholic missionaries to the colonies and what would have been heard as part of their liturgy in the cathedrals there. This work, along with others by Lienas, is held in the archive of the Convento del Carmen in Mexico City.