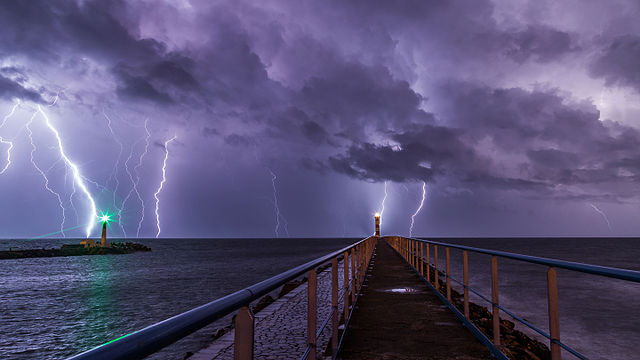 Spring is an unsettled season. The passage from winter into summer can be stormy, with days of wind and rain ushering in the heat. Music, too, can be prone to storms, some quite literal. Particularly in the baroque, composers enjoyed depicting the clapping of thunder and the gusting of the wind. We'll sample storms on sea and land,Â plus a featured release by the stormily named American baroque orchestra Tempesta di Mare.

We'll start withÂ poetry from the Middle Ages, paired with melodies from the same period, and jolted to life by the medieval music ensemble Per-Sonat. We'll hear "Die werlt was gelf, rÃ´t unde blÃ¢," off the group's recent release on the Christophorus label, featuring the poetry of Minnesanger Walther von der Vogelweide.

[pullquote]"They sicken of the calm who knew the storm."Â [/pullquote]

The quote is from the poetry of Dorothy Parker, but the doyenne of snark isn't the only one to feel the allure of stormy weather. There's often a certain amount of heave and churn in music, but in the baroque era, some composers turned from metaphorical to literal storms-depicting wind, rain, thunder, and lightning in musical terms.

Vivaldi devoted an entire concerto to his storm, but Ludwig van Beethoven must have figured he could get it done in only one movement. Beethoven's sixth symphony, nicknamed the "pastoral" symphony, is beloved both for its peacefulness and its stormy fourth movement.

With its turbulent plots and unstable protagonists, opera is a natural spawning ground for storms.Â Marin Marais composed Alcione-his tragedie en musique-to premier in Paris in 1706. Based on the writings of Ovid, Alcione tells the tale of lovers separated, and reunited, by magicians and gods. Along the way, there are shipwrecks and tempests-prime opportunities for Marais to show off his compositional skills. Let's hunker down for Marais's "TempÃªte," or tempest, in a performance conducted by Jordi Savall.

Earth, wind, and fire! It's a 1970s band, but it's also the makings of stormy weather-and stormy music-throughout the centuries. Violinist and composer Jean-FÃ©ry Rebel enjoyed the favor of the Sun King, Louis XIV, throughout his musical life. First presented at court at the age of 8, Rebel enjoyed a long and successful musical career before stepping down from his court post in 1735. Two years later, though, Rebel came blazing out of retirement with Les Ã‰lÃ©mens, a startling musical depiction of the building blocks of life. In a foreword, Rebel describes his opening movement and clues us in as to how to identify his musical elements. He writes:

"The introduction to this work is Chaos itselfâ€¦The bass expresses Earth by tied notes which are played jerkily. The flutes, with their rising and falling line, imitate the flow and murmur of Water. Air is depicted by pauses followed by cadenzas on the small flutes, and finally the violins, with their liveliness and brilliance represent the activity of Fire."

Next we'll hear three of the elements that follow chaos, in a rendition by the Palladian Ensemble. Here's "Air pour les violons,"Â depicting earth and water, and a chaconne,Â depicting fire.

Wind is the power behind almost every storm. And wind also helped to power several pieces of Renaissance polyphony, whipping itself into works by such Renaissance masters as John Taverner, Christopher Tye, and John Sheppard. All three composers wrote masses based on a tune called "The Western Wind," which was possibly a secular love song from the court of Henry VIII. Of these masses, Taverner's was most likely the first to be written. Let's hear Ars Nova Copenhagen, performing the Gloria movement from Taverner's Western Wind mass.

A Dark and Stormy Night

Storms are scary, as any toddler or small animal knows. Some witches are scary, too, and so it's natural that the two became linked in folklore and art. The image of a witchâ€¦or three, muttering over a cauldron while conjuring bad weather seems deeply impressed into our artistic consciousness.

"When shall we three meet again? / In thunder, lightning, or in rain?"

In Henry Purcell's opera Dido and Aeneas, we meet these storm-conjuring witches again, only this time they are singing. A strategically conjured storm helps Dido along the road to tragedy. Let's hear the witches at work in a brief excerpt from Purcell's opera. Nicholas McGegan leads the Philharmonia Baroque Orchestra.

As an instrument, the hurdy-gurdy has had a tough time catching a break. In Renaissance iconography, the hurdy-gurdy could be used to represent satanic ritual, witchcraft, or perversion. The cranking of the handle was thought to reflect the stirring motions witches used to conjure storms. In the right hands, though, the hurdy-gurdy is a thing of beauty.

Tobie Miller plays the hurdy-gurdy in this setting of the poetry of the Minnesanger Walther von der Vogelweide. The ensemble is Per-Sonat, and the piece is "Do der sumer komen was."

Let's sample some of the CD's tempestuous moments. Leclair composed his sole opera, Scylla et Glaucus, in 1746. Recounting the rivalry between a nymph and a sorceress, the opera is full of fantastical and often fearsome music.

We'll hear an excerpt beginning with threeÂ Airs de Demons, (thunder sheet included!), followed by monsters emerging from the pits of hell at the bottom of the sea in the frenetic Symphonie pour exprimer l'aboiement des monsters.

The writer for this edition ofÂ HarmoniaÂ is Anne Timberlake.