“For never was a story of more woe / Than this of Juliet and her Romeo.” Valentine’s day may be a day of chocolates, flowers, and joy for some. For others, love is fraught with sadness, separation, and death. This week on Harmonia: stories of famous star-crossed lovers. Plus, our featured release, In seculum viellatoris: The Medieval Vielle, by Le Miroir de Musique, led by Baptiste Romain.

“The Evils of love I have just read,” by Hieronymus of Moravia, from around the year 1300. Le Miroir de Musique performed, with percussion and a vielle carved from a single piece of maple. We’ll hear more from various vielles later from our featured release, In seculum viellatoris: The Medieval Vielle.

Ah, Valentine’s day—a day for lovers. A new pair walks down a promenade with the hopes of young love. An old married couple look out onto the ocean together, surrounded by two generations of their progeny. However -- this holiday is NOT happy for all. This hour on Harmonia, we’ll look at couples that were doomed from the start.

Perhaps the most well-known ill-fated pair is Romeo and Juliet. It’s from Shakespeare’s words about these two characters that the term “star-crossed lovers” is coined, as the narrator begins, “Two households, both alike in dignity / In fair Verona, where we lay our scene…A pair of star-cross’d lovers take their life.” In the play, when one of Juliet’s family members hears of her supposed death, musicians play “Heart’s Ease.” This is the ballad “Complain my lute,” set to the tune of “Heart’s Ease.”

Music for Romeo and Juliet, performed by The Baltimore Consort. That was “Complain my Lute,” a sixteenth-century broadside ballad.

Romeo and Juliet were star-crossed lovers due to their feuding families. Our next couple was involved in an even larger spat—between the Israelites and the Philistines. Samson, an Israelite judge, married a Philistine woman, Delilah. When Delilah learned that Samson’s extraordinary power came from his un-cut hair, she shaved his head. After being captured and blinded by the Philistines, Samson tore down their temple, leading to the death of many of his enemies as well as himself. Handel brings this biblical story to life in his 1742 oratorio Samson. Here, our protagonist describes what he experiences as he can no longer see, in the aria “Total Eclipse.” Then, he sings to his beguiling wife, Delilah, “Your charms to ruin led the way.”

Like Romeo and Juliet, another Shakespeare star-crossed pair is Pyramus and Thisbe. Eighteenth-century British theater composer John Frederick Lampe re-works part of Midsummer Night’s Dream. In Ovid’s telling of the myth, the lovers, Pyramus and Thisbe, whisper sweet nothings through a crack in a wall. In Lampe’s mock opera, the wall itself sings. We’ll hear a mid-play scene, when Pyramus is singing to the wall.

Tenor Mark Padmore sang “And thou o wall;” and before that, the overture to Pyramus and Thisbe by John Frederick Lampe. Peter Holman led Opera Restor’d.

Welcome back! We’re exploring stories of star-crossed lovers. Two real life lovers kept apart by fate were the twelfth-century couple Peter Abelard, the scholar and philosopher, and Héloïse, his student. Their affair that had gruesome consequences: attacked and castrated by some of her angry relatives, Abelard became a monk, and Héloïse went to live among nuns in a convent. Speaking of star-crossed, Héloïse, a great lover of astronomy, oddly named their out-of-wedlock child Astrolabe after a tool for measuring the stars. We’ll hear Epithalamica, a sequence for Easter, by Abelard.

Although they continued to correspond their whole lives, Héloïse and Abelard did not end up together, although it’s interesting to note that their remains did. Some star-crossed relationships, however, survive their ill-fates. In the Greek myth of Orpheus and Euridice, the couple is separated when Euridice dies. Orpheus enters the underworld to fetch Euridice on the condition that he not look back at her before they reach the mortal realm. He leads her up through the levels of the underworld and then, at the last second, looks back, losing her forever—that is, in the classical myth. Italian librettist Ottavio Rinuccini rewrote the ending so that the couple ends up together in the end—missing the whole point of the myth, of course, but never mind. The shepherds rejoice as the couple joins together after a harrowing time in Hades.

We move now from archetypal stories of love lost, to the great storytellers of the Middle Ages. The Troubadors and other medieval poet-composers often accompanied themselves on various instruments, including the bowed vielle. Baptiste Romain explores this ancestor to the violin, accompanying song and dance on the 2018 Ricercar release, In seculum viellatoris: The Medieval Vielle. In this song, the troubadour Perdigon writes, “love treats me like someone who is sick with sleep, and who would soon die of it, if not woken up.”

“All year round, love treats me like someone who is sick with sleep.” A song by thirteenth-century troubadour Perdigon, performed by countertenor Paulin Bündgen, with Baptiste Romain on the rubeba, a pear-shaped bowed-string instrument.

Baptiste Romain includes instrumental music for dance as well as song in this recording, In seculum viellatoris: The Medieval Vielle, demonstrating the virtuosic possibilities and wide use of the vielle. We just heard the vielle accompanying song playing chords, drones, and occasional melodic figures and ornamentation. Next, you’ll hear how it is utilized as a melodic instrument, playing rapid figurations that suggest dance. We’ll hear Belicha, performed by Baptiste Romain, vielle, and Claire Piganiol.

Thanks to our studio engineer Michael Paskash, and our production team: Aaron Cain,Wendy Gillespie, LuAnn Johnson and John Bailey. I’m Angela Mariani, inviting you to join us again for the next edition of Harmonia. 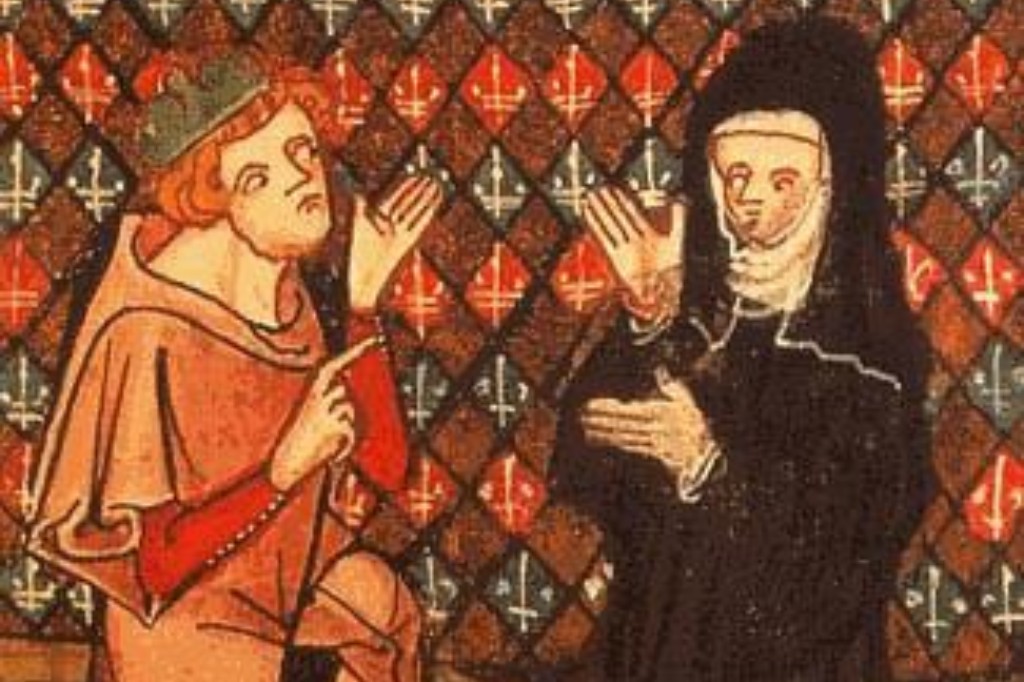 “For never was a story of more woe / Than this of Juliet and her Romeo.”

Valentine’s day may be a day of chocolates, flowers, and joy for some. For others, love is fraught with sadness, separation, and death. This week on Harmonia: stories of famous star-crossed lovers. Plus, our featured release, In seculum viellatoris: The Medieval Vielle, by Le Miroir de Musique, led by Baptiste Romain.