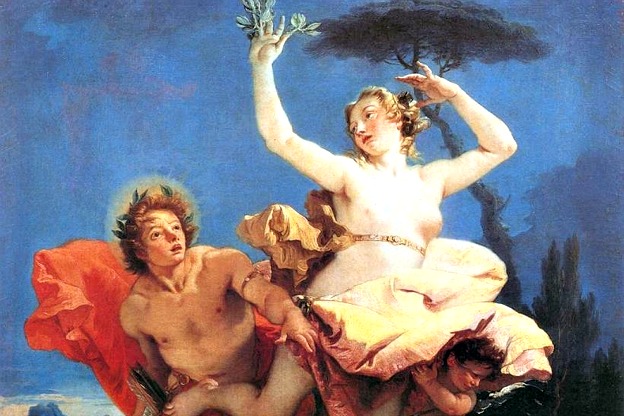 Time capsule for this episode: 1645

The Epitaph of Seikilos is the earliest surviving example of a complete written musical composition. It was inscribed on a tombstone in ancient Greece in the 1st century AD. The notation doesn't look at all like modern musical notation. Instead, symbols are used, inscribed just above the text of the song, to indicate melody and rhythm.

Poetry and music have enjoyed a special partnership since time immemorial. "Ah, Robin, Gentle Robin" is a composition from the reign of Henry VIII attributed to William Cornysh the Younger. In this three-voice canon, a lovelorn speaker poses a rhetorical question to the bird. He begs, "Tell me how thy lamen doth, and thou shalt know of mine." Lemen was an archaic word for "sweetheart" or "lover."

Many words of the famous poet and playwright William Shakespeare have been set to music. The anonymous setting "Fear No More," gets its text from Shakespeare's play Cymbeline. This consoling song is sung at the death of the play's protagonist, Imogen.

The composer Claudio Monteverdi devoted years of his life to the composition of madrigals, which incorporated poetry by Petrarch, Torquato Tasso, Giovanni Battista Guarini, and others. Monteverdi published a total of nine books between 1587 and 1651. Anima dolorosa che vivendo is taken from Monteverdi's fourth book of madrigals (for five voices), published in 1603. Its amorous text, attributed to the poet Battista Guarini, speaks of the pain of longing and the intensity of death.

In its more than twenty years of existence, the New York Pro Musica Antiqua introduced medieval, renaissance and baroque music to a wide audience and inspired many performers to explore this hitherto little known repertory, playing a seminal role in making early music in America what it is today. I'm Wendy Gillespie, and this is the third and final installment of our tribute to this pioneering group.

The New York Pro Musica Antiqua was the inspiration of its charismatic leader, Noah Greenberg-a larger than life presence who came downtown to Manhattan from the Bronx to introduce new repertory to talented musicians. By the late 1950s, the Primavera Singers and Renaissance Band had coalesced into the New York Pro Musica, which became over time a core ensemble of five singers and five instrumentalists supplemented by extra musicians for larger productions, touring the country and the world under the management of Columbia Concerts.

At its apex, the Pro Musica gave 150 concerts in a season. Members were on salary with full benefits, making a full time living from that one ensemble. The Pro Musica received Rockefeller and Ford Foundation grants to develop programs and administer the workings of the group, including paying travel expenses for a renaissance band, a motet choir, and casts of the liturgical dramas along with their costumes, sets and crews. Recordings and performances, some of them costumed and staged, charmed audiences all over the world.

The Pro Musica's repertory spanned seven centuries and included vocal music, such as this piece from renaissance Italy by Josquin des Pres.

The Pro Musica also performed and recorded purely instrumental music, as in this seventeenth-century fantasy by the English composer who was born with the name John Cooper but changed his name to Giovanni Coprario to reflect his love of Italian music.

Following the Coprario piece, we'll hear instruments and singers combine in a performance of what has become mainstream renaissance repertory like this mass movement from the turn of the sixteenth century.

Tragedy struck the musical world in January of 1966, when Noah Greenberg died very suddenly of a heart attack at the age of 46. (Sheila Schonbrun, who first sang with Greenberg with what would become the Pro Musica as a 16-year old college student, recalled that, "It felt like the bottom dropped out of my life.")

Richard French, the President of the Board and a close friend of Greenberg, wrote, "At one stroke Pro Musica was cut off from the genius who conceived and nurtured it." He asked the question: "Could an organization which had been so much the expression of the personality of a single individual survive him?"

The answer is a guarded "'yes." The ensemble did survive for another eight years, albeit with four different directors attempting to fill the enormous gap left by death of Noah Greenberg. The final recording made by the ensemble was of Marco da Gagliano's La Dafne, under the direction of George Houle. The fully staged and costumed production went to the Spoleto and Corfu festivals, as well as touring America.

The opera relates the myth in which the god of the sun and music falls in love with the beautiful nymph Dafne. Determined not to let Apollo succeed in his quest to make her his own, Dafne appeals to her powerful father to change her form, and her father transforms her into a beautiful tree, which is, of course, why the bay laurel's leaves never decay.

Let's hear Apollo's lament from the NYPMA recording, followed by a version recorded 20 years later by the Ensemble Elyma under the direction of Gabriel Garrido.

We Â heard Apollo's lament from Marco da Gagliano's La Dafne performed first by the NYPMA and then by the Ensemble Elyma. Two very different versions of the same, both reflecting the musical aesthetic of their own performers' time and place, at the same time "reconstructing" a possible performance from nearly 400 years ago. It was, of course, perfectly legitimate even in baroque times to adapt a role to the performer, and the choice of continuo instruments was often left up to the performers, so a good bit of flexibility was built into the music.

The final concert of the New York Pro Musica took place at the Morgan Library in NY for an international Petrarch convention on May 16, 1974. The legacy it left behind consisted of more than 50 performing editions bearing the NYPM name, and more than 40 recordings that were subsequently remixed for stereo, reissued as anthologies, and continue to intrigue listeners and inspire musicians. The Pro Musica's instruments and library went to NYU, where they are still in active service, and its archives are preserved at the NY Public Library.

But that is not the end of its legacy. The performers regrouped, variously starting new ensembles and becoming teachers to the next generation of early musicians. Many of them are still active, influencing today's students and continuing to delight listeners the world over. There can be little doubt that the New York Pro Musica Antiqua inaugurated the early music movement in America, and its influence continues to this day, sometimes unbeknownst to young performers. We hope you've enjoyed this look at the early days of early music in America. I'm Wendy Gillespie.

On our featured release, the ensemble Capella de Ministrers, under the direction of Carles Magraner, takes us on a tour through medieval and renaissance Spain on their recording El Cicle de la Vida, or the circle of life.

The CD contains a variety of music, including a song from ancient Greece called the Epitaph of Seikilos, and renaissance works, such as Tomas Luis da Victoria's setting of the Christmas responsory O magnum mysterium.

Let's listen to a rarely heard work by Berenguer de Palou, 13th-century Bishop of Barcelona, alongside a piece from the Codex de las Huelgas.