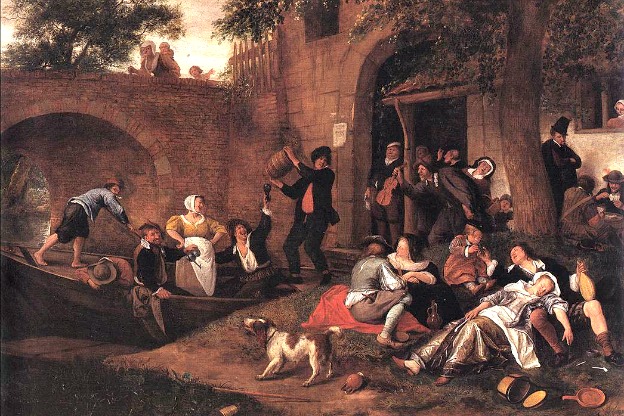 Time capsule for this episode: 1410

Let's begin with the song "Walking in a Meadowe Greene" performed by the Baltimore Consort from their 1993 recording The Art of the Bawdy Song.

Songs, catches, rounds, tavern songs and ballads fall into that foggy area between the two worlds of early music and folk music, and many of them fall slightly into the realm of the ridiculous. But that's why we'll be playing them-because they're fun!

We'll start with some tunes from 17th-century English composer Thomas Ravenscroft, who compiled three collections of anonymous songs, rounds, and catches. Ravenscroft believed that music and song can be a "salve for every sore."

Next, let's hear a little tune by the one and only Henry Purcell called "I gave her cakes and I gave her Ale." It may be a little surprising if you thought that Purcell only vented his musical creativity hailing bright Cecilia.

(I must say this recording was the first early music CD that I've seen with a parental advisory sticker.)

The 1957-58 concert season brought with it the New York Pro Musica's first performances of the medieval liturgical drama The Play of Daniel.

The story, based on the biblical Book of Daniel, was set to music around the turn of the thirteenth century by students in Beauvais in France and is preserved in a beautiful manuscript that is now at the British Library. Noah Greenberg and the NYPM were the first to revive the play in the mid 1950s. Their costumed, staged performances of it and The Play of Herod became staples of the New York City Christmas season for many years. And since then, many early music ensembles have performed and recorded The Play of Daniel.

Let's listen to a significant moment in the play: There is great rejoicing at King Belshazzar's court because his men have looted sacred vessels from the Jewish Temple when suddenly mysterious handwriting appears on the wall.

That was an excerpt from the New York Pro Musica Antiqua's 1958 recording of The Play of Daniel.

Let's hear the same moment in the play as performed by the Dufay Collective on their 2008 Harmonia Mundi recording. You may noticed that the celebration of the looted vessels, which is in duple time in the Pro Musica recording, is performed in triple time in the Dufay Collective version. Just the opposite pertains in a later scene when the King promises that whoever can interpret the text will be given power over Babylon: The NYPM version is in triple meter, the Dufay Collective in duple. Scholars still do not agree on the interpretation of either exact pitches or rhythm. And the pronunciation of Latin has varied both geographically and chronologically over the centuries.

In 2008, Mary Anne Ballard created a new production of The Play of Daniel at the Cloisters in New York City to celebrate the 50th anniversary of the original production. Her program note says:

Ours is one of perhaps hundreds that have followed since Greenberg's premiÃ¨re at The Cloistersâ€¦ Just as the youth of Beauvais â€˜invented' their play, so too have the musical grandchildren of Greenberg and Co. â€˜found' their own arrangements of it, experimenting and improvising in medieval fashion. It would be fair to say that most of the â€¦performers in today's production might not have been inspired to devote themselves to the field of medieval music had it not been for the movement inaugurated by the New York Pro Musica.

Let's continue with Daniel's lament to King Darius who has thrown him into the lion's den at the urging of his wicked counselors. Unable to set him free, the King commits him to the care of the true God, whereupon an angel protects him from a horrible fate.

First we'll hear the NYPM, followed by the same moment as recorded by the ensemble Estampie of Munich in 1994. Then a third version from the 1983 recording by Schola Hungarica, who give us an unaccompanied, very spare interpretation, using German pronunciation of the Latin text. Finally, we'll hear the Dufay Collective from their 2008 CD.

From The Play of Daniel, we heard Daniel's lament to King Darius performed by four different ensembles-the New York Pro Musica Antiqua, Estampie, Schola Hungarica, and the Dufay Collective-from recordings spanning 50 years. All these performers started with the same single line of music that is only available in one source, but they came up with these very, very different interpretations.

The Play of Daniel ends with the instruction that the Te Deum should be sung. A very well-known hymn of praise, the Te Deum has only one known melody, though several variants, so the performers must choose what version to use and how to sing it. Soloists? Two choirs? In the same octave? Adding notes to the written notes? The NYPM employs all the performers in the play, singing alternate verses in two choirs and ringing bells as they process out of the auditorium or church at the end of the play. The Dufay Collective makes different choices.

We heard the Te Deum from The Play of Daniel, starting with the New York Pro Musica and ending with the Dufay Collective.

Both ensembles employ bells, but the Dufay Collective ones are big bells in a belfry, and they are used in a very different way. Instead of two choirs, the Dufay performance alternates text between a soloist and a choir. They also choose a different version of the melody and employ French pronunciation of the Latin that you perhaps best heard in the "u" vowels like the "um" of "Deum."

Both interpretations are "correct," though they are very different from each other. Made some fifty years apart, they give us an evocative illustration of how tastes have changed in the performance of medieval music. Part of the reason can be attributed to scholarly research, but perhaps most to the changing tastes of the listening public. The important point is that without the early exploration of this music by Noah Greenberg and the New York Pro Musica, and their ability to move their audience, the demand for early music performance would likely never have become what it is today.

Join me next week for the third part of our tribute to the ensemble that started the early music movement in the US. We'll hear about the final years of the NYPMA and listen to music from one of the earliest fully staged baroque operas to be mounted in America. I'm Wendy Gillespie.

On our featured release, Les Witches offers an excellent collection of dances and Gaelic laments. The recording Lord Gallaway's Delight explores 16th- and 17th-century music from the British Isles and is a complement to the ensemble's earlier release Nobody's Jig. Les Witches is joined on this album by SiobhÃ¡n Armstrong, a specialist in early Irish, renaissance, and baroque harp.

Traditional Irish music encompasses a world of songs for every occasion and mood. Drinking songs, ballads, and laments can be sung unaccompanied or accompanied by instruments such as the flute, fiddle, and, of course, the harp. Up to the 17th-century, harps were praised for their refinement and rich sound. (Players of the harp were often employed by members of the Irish aristocracy.)

Tunes such as Johney Cock thy Beaver were performed throughout the British Isles, taking on new forms as one player after another learned them by heart. Twenty-six of these tunes were published by John Playford in his Division Violin of 1685. Each selection unfolds through sets of increasingly complex variations, or "divisions." The written embellishments reflect centuries-old traditions of musical ornamentation and improvisation.