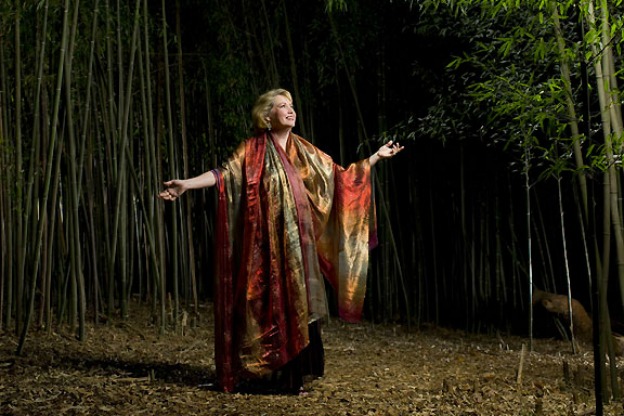 Time capsule for this episode: 1156

Let's start with the overture from George Frideric Handel's opera Semele. We'll hear more from this opera later in the hour as we shine the spotlight on soprano Julianne Baird.

There's always been some overlap between early music and folk music, and some early music performers turn to folk traditions for inspiration. Let's start this hour by heading north to Canada to hear from a couple of musicians whose work crosses over to traditional sources.

Soprano Suzie Leblanc spent her childhood in Acadia, a region of northeastern Canada where Quebecois, English, Irish, and Scottish heritages merge.Â Returning to her roots after decades of success with baroque and classical repertories, LeBlanc performs arrangements of traditional melodies on two albums-Tout passe and La mer jolie. She is accompanied by an ensemble whose members play viola da gamba, lute, flute and fiddle.

The renowned soprano Julianne Baird has been delighting concert audiences all over the world for many years. She has performed with ensembles ranging from the Cleveland and Philadelphia Orchestras to the Waverly Consort and has made more than 100 recordings of medieval, renaissance, baroque and classical music.

Let's listen to Julianne Baird sing an aria from George Frideric Handel's opera Semele with the Brewer Chamber Orchestra. Semele has an amorous plot loosely drawn from Greek mythology. It's therefore not surprising that in 1744 it offended listeners at Covent Garden's annual Lenten concert series, who were expecting an uplifting, Bible-based oratorio.Â Originally set completely in English, it also irritated fans of Italian opera, and so the work initially received only four performances.

Next we'll hear Baird sing one of the most famous songs of the early 17th century. It comes from Giulio Caccini's Le nuove musiche of 1602, a collection of Caccini's songs that includes a preface full of information how the pieces were to be performed-a gold mine for practitioners of historical performance.

As Distinguished Professor of Music at Rutgers University, Baird teaches music history and literature and coaches vocal ensembles. She has presented lectures, workshops and master classes all over North America â€“ and all this in addition to her very active performing career!

Let's hear a performance by Ms. Baird of Barbara Strozzi's lament Lagrime mie.Â Strozzi was a musical pioneer in her own time, publishing vast amounts of music in single-composer volumes and holding her own in male-dominated intellectual circles.

Our featured release is an unusual weaving together of sixteenth-century lute song with music of a twentieth-century singer-songwriter.

On this recording, Fredericksen pays tribute to England's enduring tradition of musical excellence.Â Music of John Dowland and Thomas Campion is combined with songs of Nick Drake, a British singer-songwriter who died in 1974 at the age of 26.

The music of Dowland and Campion was nearly forgotten between the seventeenth century and the twentieth. Similarly, Nick Drake's final album Pink Moon received very little attention for years after his death. In each case, it might be claimed that the music's survival was ensured by cult followings that slowly introduced the music to a broader public.

These songs are linked by similarities of musical style.Â The sparse melodies of Drake, Dowland, and Campion conjure up strong melancholic moods and give weight to the all-important text.Â Fredericksen's performances emphasize their timelessness poignancy.