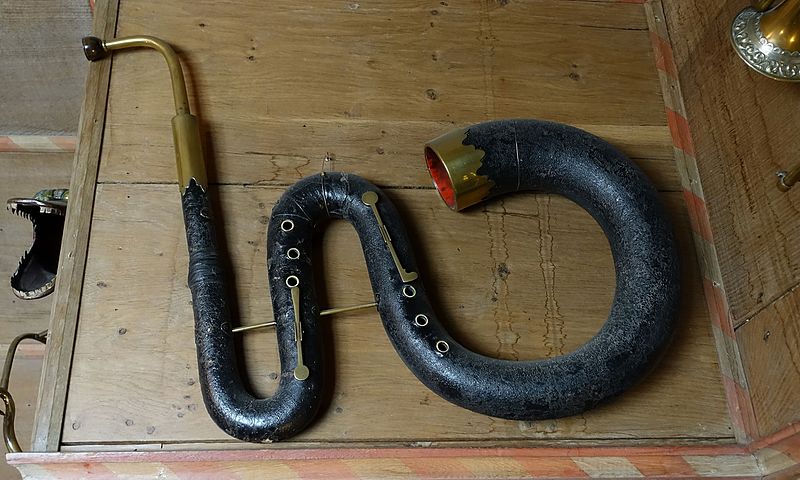 Slimy, slippery, and slithering things. This hour on Harmonia, we're listening to the sounds of frogs, snakes, and serpents, both real and mythological. Our featured release is Le Serpent Imaginaire, a recording exploring music for a member of the cornetto familyâ€¦you guessed it, the serpent!

Instrumental music by Jean-Baptiste Lully. That was from the 2001 recording of PersÃ©e, withÂ Christophe Rousset conducting Les Talens Lyriques.

It's a Slippery Slope

We'll begin our slide off the slippery slope with some famous frogs. Handel's Israel in Egypt, an oratorio, tells the Passover story from the Old Testament, with texts taken from Exodus and the Psalms. Frogs are the second plague sent against the pharaoh. Here is the overture to this oratorio, followed by the aria "Their land brought forth frogs," sung by countertenor Timothy Wilson.

That was the overture and aria, "Their land brought forth frogs," from the 2005 rerelease of Handel's Israel in Egypt performed by the Taverner Players, Taverner Choir, and soloists, all conducted by Andrew Parrott.

Heinrich Biber's 1681 sonata "Representativa" playfully shows the audience several kinds of animals including birds, cats, and frogs. Unlike the pestilence caused by the frogs in Handel's oratorio, Biber's frogs croak lazily by the shore. We'll listen to "Der Frosch" and the closing allemande from Biber's sonata. Then, we'll hear a less literal representation of frogs by John Dowland, inspired by the "Frog Galliard."

We heard "Der Frosch" and an allemande from Biber's Sonata Representativa. Gunar Letzbor was the violinist performing with Ars Antiqua Austria on the 1994 Pan Classics recording of Biber's sonatas. Then, we heard John Dowland's version of "The Frog Galliard" under the title "Now, oh now my needs must part," performed by lutenist Thomas Dunford.

Slithering snakes have found their way into many pieces of art, literature, and music. In Shakespeare's comedy A Midsummer Night's Dream, fairies request "spotted snakes with double tongue" and other creeping and crawling creatures to stay away from the Fairy Queen. Here is a version of "You spotted snakes" that was popular in Elizabethan England.

We heard "You spotted snakes" performed by The Playfords from their 2015 recording The Hunt is Up. (:10)

Whom Phoebus slew with his arrow

Was one furlong in length

As Ovid describes it.

But no man ever saw a serpent

So fierce, so cruel or so proud

As the serpent which repulses me

When I seek mercy of my lady."

This serious, lyric ballad mimics qualities of trouvÃ¨re songs. A hallmark of this style is the multifaceted nature of the text. The listener can hear the physical strength as well as other, masculine kinds of prowess from Phoebus.

Welcome back. We've heard frogs and snakes. Now, let's hear from some mythical slimy, slippery, and slithering creatures. In Greek mythology, Gorgons are reptilian creatures depicted as women with snakes for hair, known for turning mortals into stone. The most famous gorgon, Medusa, was slain by the hero Perseus. Jean-Baptise Lully depicts the story in his 1682 opera PersÃ©e.

In Act III, Perseus begs courage from the messenger god Mercury, who says "Perseus, go, fly, where Love calls you. Gorgons, henceforth you will be without power." Perseus, wearing Pluto's helmet of invisibility, approaches Medusa. After a struggle, he slays her. Mercury announces that Perseus carries the head.

We heard music from the opera PersÃ©e by Jean-Baptiste Lully. Christophe Rousset conducted Les Talens Lyriques. The album was released in 2001 on the AstrÃ©e NaÃ¯veÂ label.

Gorgons aren't the only scary slithering things in drama. John Gay's libretto to Beggar's Opera refers to a basilisk â€“ the king of serpents, who could kill with a glance. We close this segment with the overture and air, "Many may escape from rope and gun."

Adrian Thompson was the soloist in that air from Beggar's Opera, music arranged by Christopher Pepusch.

We've heard music about slimy, slippery, and slithering things, both imaginary and real. On our featured release, Le Serpent imaginaire, we will hear another kind of serpent completelyâ€¦the instrument called the serpent! The bass member of the cornetto family, the serpent is constructed out of carved wooden halves bound together with leather and is played with a trombone-like mouthpiece. Although the serpent has holes, much like early woodwinds, it is considered an ancestor of the tuba. Since the tube forms an "S" shape, serpent building challenges even the most skilled instrument maker. Let's listen to two ricercadas by Spanish Renaissance composer Diego Ortiz, played on the serpent.

The serpent was prized for its vocal quality, and was regularly used to accompany singers in sacred music. Here are serpents performing the Pentecost hymn "Veni creator spiritus." French poet and organist Jehan Titelouze composed this setting in 1623.

That was the 9th century hymn "Veni creator spiritus," in a setting by Jehan Titelouze. Next, we'll hear an arrangement of "Sonata sopra La Monica" by German baroque composer Philipp Friedrich Boeddecker. The piece was originally for soprano instrument (usually violin) and dulcian. However, since Boeddecker's brother was a cornetto player, he might potentially have approved of this rendition.

The writer for this edition ofÂ HarmoniaÂ wasÂ Sarah Huebsch.