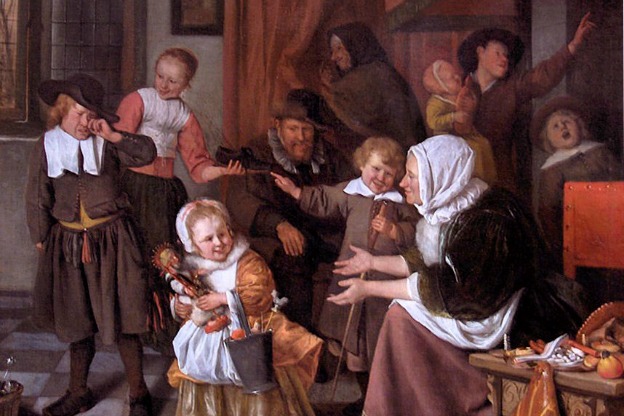 When Santa and his reindeer make the rounds this Christmas, what tunes do you suppose the big guy will have playing over his sleigh's stereo system? We're taking our best guess on this edition of Harmonia. Tune in for a playlist of holiday samplings from an array of early music recordings â€“ new and old, from performers like the Tallis Scholars, Boston Camerata, The Sixteen, Andrew Lawrence-King, and many more.

Here's a soaring Largo from Haydn's Op 33 string quartets, No. 4 in B flat major, performed by the London Haydn Quartet. At least one of the opus 33 string quartets was premiered on Christmas Day in 1781 for the Russian Grand Duke Paul who was visiting Vienna. Haydn subsequently dedicated the set to the Duke, and it's for this reason that Haydn's Op. 33 quartets have been nicknamed the "Russian" string quartets. We'll hear more from this set later in the program.

One Christmas tune that's been around as long as Santa Claus has been coming to town is the song, Resonet in Laudibus. Let's hear this anonymous 14th-century plainsong, followed by an embellished version by the Franco-Flemish composer Orlande de Lassus.

The Resonet in Laudibus tune became the basis for the popular German carol "Joseph, lieber Joseph mein." Here's one version of the traditional carol by the Lutheran composer, Johann Walter, followed by a setting by Heironymous Praetorius.

This Christmas song remained popular into the 17th century. References to the tune can be heard in the "Sonata Natalis" for two trumpets by Czech composer Pavel Josef VejvanovskÃ½.

Felice Navidad! Froehliche Weihnachten! Merry Christmas!Â There are many ways of offering Season's Greetings. In France, the expression is "Joyeux NoÃ«l!" for the time of year when Father Christmas or PÃ¨re NoÃ«l makes his rounds.

The French word noÃ«l also refers to a type of popular Christmas song that flourished throughout France beginning in the early renaissance. During that time, inexpensive editions of popular anthologies of noÃ«l texts in regional and vernacular dialects were easily available.

Given that the word noÃ«l has origins in the Latin word, natalis, meaning birthday, it's a curious happenstance that a French composer bearing the name Natalis specialized in the noÃ«l genre. Let's hear a noel by Natalis Cordat.

And what could evoke the sounds of Christmas more than the ringing of bells? Reindeer and jingle bells â€“ sleigh bells and chimes â€“ or perhaps even the ringing of a carillon from a tall tower!

Louis Couperin and Jean-Francois Dandrieu both wrote pieces in imitation of the carillon, and we'll hear those pieces performed by harpsichordist Elain Funaro and harpsist Andrew-Lawrence King, respectively.

Just before Italian composer Caterina Assandra entered the Benedictine convent of Sant'Agata in 1609, she published a volume of music that opened with the Christmas antiphon, Hodie Christus natus est. We'll hear the ensemble Capella Artemisia perform an instrumental version of this Italian nun's 17th-century setting with added diminutions. But first, let's listen to a medieval plainchant on the same Christmas text, sung by Anonymous 4.

Another composer to set this Christmas text was Giovanni Pierluigi da Palestrina-one of the great composers for the Roman Catholic Church in the 16th century.

a partridge in a pear tree

â€¦and a birdsong in a Haydn string quartet?

Haydn's C major quartet, Op. 33 No. 3 has been nicknamed "The Bird" for the happy grace notes and chirping acciaccaturas sprinkled throughout the piece. We'll hear some of this birdsong next from our featured recording-a 2013 release of Haydn's Op 33 by the London Haydn Quartet on the Hyperion label.