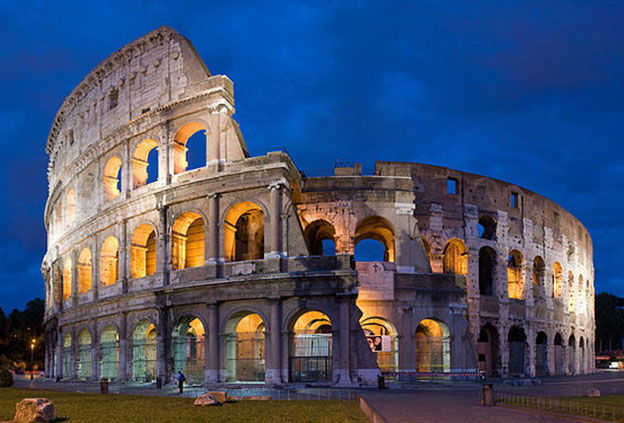 “When in Rome, do as the Romans do.” This proverb, attributed to Saint Ambrose, encourages us to keep with the traditions of the places we visit and inhabit. But, what does one listen to when in Rome? This hour on Harmonia, we explore music written in Rome. Our featured release is the 2017 recording Salzinnes Saints: Plainchant from the Salzinnes Antiphonal, performed by the ensemble Psallentes.

We heard music from The Sixteen’s sixth album of the music of Giovanni Pierluigi da Palestrina.

Palestrina is perhaps the best-known composer from the Roman School, which included 16th and early 17th century composers who wrote church music in Rome. Their works came at the height of Renaissance polyphony.

Giovanni Maria Nanino may have been a student of Palestrina’s at San Luigi de’ Francesci in Rome. He was widely respected as a great teacher of his generation. Although most of Nanino’s published output comprises sacred music, several of his secular works survive. Here is Nanino’s setting of Petrarch’s poem “Erano I capei d'oro a l'aura sparsi, or in English, “She let her sunlit tresses fly.”

Some so-called “Romans” were not born that way. Flemish-born composer Jacques Arcadelt is best known for his secular songs. However, he spent a decade in Rome working at St. Peter’s Basilica. Many of Arcadelt’s sacred works were probably written during this time in Rome. Let’s listen to the Gloria from Arcadelt’s Missa Ave regina caelorum.

We heard the Gloria from Arcadelt’s Missa Ave regina caelorum performed by Musica Contexta with The English Consort and Sackbut Ensemble.

Like Arcadelt, Guillaume du Fay was a Franco-Flemish composer who spent time in Rome. Du Fay was a member of the Papal Choir, working under both Pope Martin V and Pope Eugene IV. Among his works composed in Rome is the isorhythmic motet “Ecclesie militantis,” which may have been written for the coronation of Pope Eugene IV.

It wasn’t just all about the choral music in Rome. There was also a place for instrumental music. Several Roman violinists were important to the development of the concerto genre. Arcangelo Corelli’s twelve concerti grossi, op. 6, continued the wave of popularity in Rome for the concerto grosso. Here are two movements from Corelli’s first concerto grosso from opus 6.

We heard the Largo and Allegro from Corelli’s Concerto op. 6 Concerto Grosso no. 1 in D Major. Pavlo Beznosiuk was the soloist and director with Avison Ensemble.

Corelli and those trained in his style – including Pietro Locatelli and Francesco Gasparini – brought attention to the violin as a solo instrument in this new form: the concerto. Here are the final two movements of Locatelli’s Concerto for Four Violins in F Major (op. 4, no. 12).

Founded in 2000 by singer and conductor Hendrik Vanden Abelle, ensemble Psallentes brings plainchant and related traditions from the Middle Ages and Renaissance to audiences worldwide. The ensemble regularly collaborates with museums, including an exhibit featuring Van Eyck’s altarpiece “Adoration of the Mystic Lamb.”

On our featured release, Salzinnes Saints, Abelle and his ensemble explore music from the Salzinnes Antiphonal, which survives in a manuscript held in the Patrick Power Library at Saint Mary's University in Halifax.