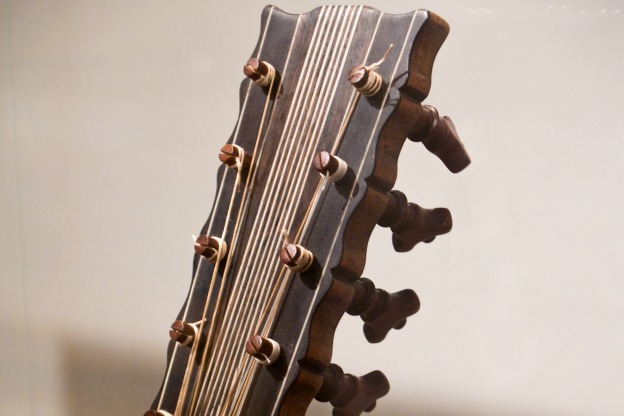 The ‘Sabionari’ guitar is one of only five guitars by Stradivari that are still around. Probably at the beginning of the 19th century, the Sabionari guitar was rebuilt to accommodate a more modern set up of the time: six strings, rather than the original five. By the middle of the 19th century, the Sabionari guitar was sold, and by the end of the century, it came into the hands of a private collector. But it wasn’t until 2011 that the instrument, by then in bad shape, was restored to original playing condition by luthiers at the French firm, Sinier de Ridder.

Guitarist, Krishnasol Jiménez, describes his experience playing this instrument as exhilarating. Until this recording, no others have been made with any of Stradivari’s guitars. For listeners, it’s amazing to be able listen to an instrument via an ipod or a .wav file on a computer, brought to life again after lying dormant for hundreds of years after it was first constructed. This recording provides an incredibly special chance to hear what a Stradivari guitar could have originally sounded like.

Both 2013 recordings, one by Brilliant Classics and the other by Carpe Diem Records, contain music all composed by Robert de Visée.

Around 1680, Visée was employed by Louis XIV where it seems that one of his duties was playing the guitar for the king at his bedside, perhaps sending him off to sleep at night. He probably also gave the King guitar lessons, though wasn’t officially appointed as the King’s teacher until 1719. As a composer, Visée published two guitar books, in addition to a number of works for lute and theorbo.  In contrast to most of Visée’s guitar pieces which came early in his career, much of his lute music comes from late in his life. His music for the French lute can be found mostly in manuscripts complied by one of Visée’s pupils.

Lutenist Toyohiko Satoh performs on this recording with an original lute built in 1610 by Lorenz Greiff. Probably originally conceived as an eight or 10 course lute when built near Munich, the instrument was likely converted to an 11 course French lute around the year 1673 and has remained that way ever since. In 2012, after nearly 400 intervening years and much restoration, Toyohiko made this recording with that instrument, a match that may well suit the music of Visée.

Here's a link to pictures and an article about the restoration of the 1679 ‘Sabionari’ guitar made by Antonio Stradivari.