Along The River Weser 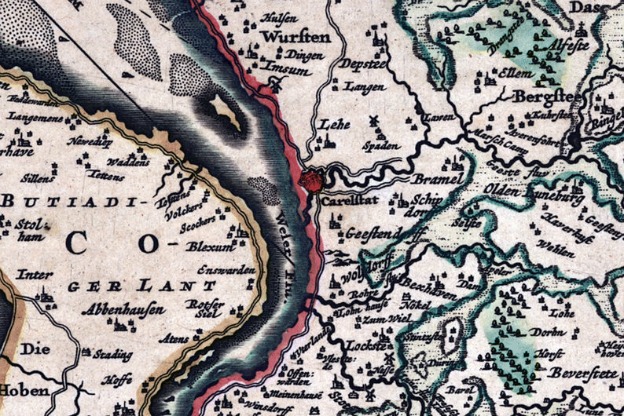 A 2013 CPO records release from the ensemble Weser-Renaissance Bremen is the third in a four part series that explores the music of the renaissance from the area around the Weser River in central Germany.

The first recording in this series focused on the musical center at Wolfenbüttel with music of Michael Praetorius. The second contained madrigals and instrumental works by Johann Grabbe from the Brake and Lemgo regions, and an upcoming volume, still in preparation, will focus on the musical activities at Kassel. The current disc, volume three, travels to Bückeburg with music composed by William Brade and Thomas Simpson.

Both Brade and Simpson originally hailed from England, but left for the continent, serving at some point in their careers near Bückeburg at the court of Count Ernst III. Brade and Simpson brought with them the styles and traditions of 17th-century, instrumental English music from their homeland; and, their influence on German ensemble music can’t be understated.

Nearly all of Simpson’s surviving music comes from three publications that came out between 1610 and 1621. One of his pieces in five parts, the Pavane Sachevil’s Dolorosi und Galliard,  can be found in his early 1610 Opusculum neuwer Pavanen publication. The piece was likely composed as an elegy for Thomas Sackville, Earl of Dorset, who died in 1608.

Around the same time as Simpson, William Brade also began publishing 5-part pavan and galliard collections in the English manner. Soon, however, he began experimenting with suite-like sequences of dances and canzonas in the Italian style, while one of Brade’s late collections from 1621 centers on functional dance music that imitates the English masque or the French ballet de cour. Brade advertised these collections as as being suitable for performance by various types of instruments.

Besides his five- and sometimes six-part ensemble music, Brade is also credited with what is conceivably the earliest solo violin piece composed by an Englishman. Found in the Uppsala Manuscript, the piece titled "Coral" is a virtuosic set of divisions on a ground that is forward thinking for its time.