Ring Around The Rosie 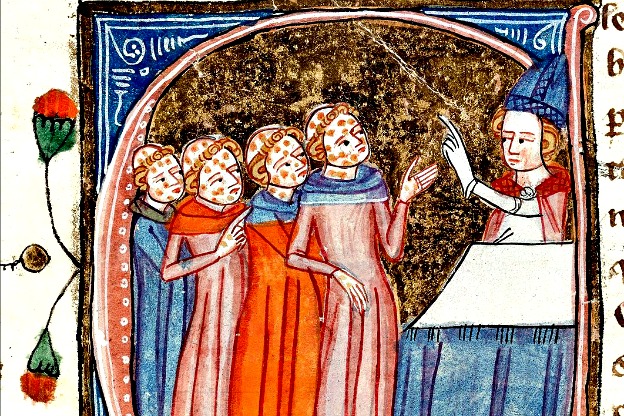 Plague plagued Europe for centuries, and we'll hear music by composers whose lives were upended or cut short by the dread disease.

That was Hesperion XX performing Gabriel Archangelus, a motet by Spanish Renaissance composer Francisco Guerrero. Guerrero was many things â€“a composer, a contralto, a negligent caretaker of choirboys-but he was no slacker! According to his biographer, the painter Francisco Pacheco, Guerrero wrote no less than a page of music for every day that he lived. Both Guerrero's life and his musical output were cut short in 1599, when the composer died in Seville during an outbreak of plague.

Ring Around the Rosie

Ring around a rosie,

We all fall down!

It's a familiar children's rhyme that's been given a dark backstory. For centuries, plague terrified Europe. Popular belief says this rhyme's "ring around a rosie" describes the lesions that would appear on a victim's skin. Posies were worn as protection against the disease. And ashes rose from the burning of plague-stricken bodies. While some scholars have debunked any connection between "Ring around a rosie" and the plague, there's no doubt about the devastation caused by these historical pandemics.

The Black Death first roared to life in 1347, cutting Europe's population nearly in half. It took the continent hundreds of years to recover, during which the disease stalked urban centers every five to six years. Some simply called it "the sickness" because what else was there that could steal away, so quickly and efficiently, your life and loved ones?

And composers were not immune. This hour we'll explore the music of composers whose lives were shortened or shifted by plague even much later, beginning with music by Johann Heinrich Schmelzer, who died of plague in Prague in 1680.

The Franco-Flemish composer Jacob Obrecht was much admired but had trouble keeping a job. Whether because of restlessness or poor job performance, he never stayed at the same place for long, and he was twice dismissed from continental posts. Obrecht was looking for new work when he died from an outbreak of plague in Ferrara in 1505.

Many composers, particularly those with noble masters, traveled to escape plague. The countryside or smaller towns were frequent destinations as every wave of plague became, in cities like London, "The Great Plague."

But it was tougher to escape if you were confined to the ghetto, as many Jewish populations were in 1630, when plague swept through Italian City States. In Florence, one eyewitness reported that, "the dead were piled in pits like cheese between layers of lasagna."

In Mantua, the Jewish composer Salamone Rossi may have been among them. Rossi was so valued by his Mantuan masters that he was exempted from wearing a yellow badge to signal his faith. But plague does not make distinctions, and there is no record of the composer after 1628.

Sometimes travel helped composers escape the reach of disease, but sometimes it dumped them in the thick of epidemic. Alexander Agricola was traveling to Castile in the service of Phillip the Fair when he succumbed to plague. Born the illegitimate son of a wealthy businesswoman, Agricola penned what a near-contemporary Hulrich BrÃ¤tel called "unusual, crazy, strange" music. Agricola died of "raging fever" in Valladolid in 1506.

In any epidemic, there are survivors. Daniel Defoe's Journal of the Plague Year, an eighteenth-century fictionalization of a London epidemic, captures the uneasy voice of those who managed to stay alive:

A dreadful plague in London was

In the year sixty-five,

Which swept an hundred thousand souls

Away- and yet I alive!

A real-life survivor was the composer and poet Guillame Machaut. The Black Death ripped through France in 1349, but Machaut emerged alive and kicking. His RemÃ¨de De Fortune is a meditation on love, loss, and whether or not-when it comes down to it-any of us can escape our fates. Let's hear a balladelle from Machaut's extended poem.

Few composers tackled the subject of plague directly. Among those who did was Marc-Antoine Charpentier, whose dramatic motet, Pestis Mediolanensis, or The Plague of Milan, depicts that city in the grip of an epidemic that lasted from 1576-1578.

Pestis Mediolanensis, written by Charpentier over a century later, commemorates the work of St. Charles Borromeo, Milan's archbishop during that time. The text also gives voice to the city's suffering:

A terrible plague was ravaging Milan;

neither age, nor rank, nor sex did it respect.

Â Corpses were strewn at the head of every street,

and contagion spread far and wide by the fetid

odors of death. But alas, alas! even more grievous,

Cries rose from the mouths of the sick,

sighs from the breasts of the dying,

and there was no one to help.

Our featured recording is a classic-and out-of-print-Decca LP from 1971 titled Musica Aeterna at Alice Tully Hall. It includes Charpentier's not-much-recorded work, Pestis Mediolanensis. (In fact, it's the only recording we could find of this piece!)

The writer for this edition of Harmonia is Anne Timberlake.