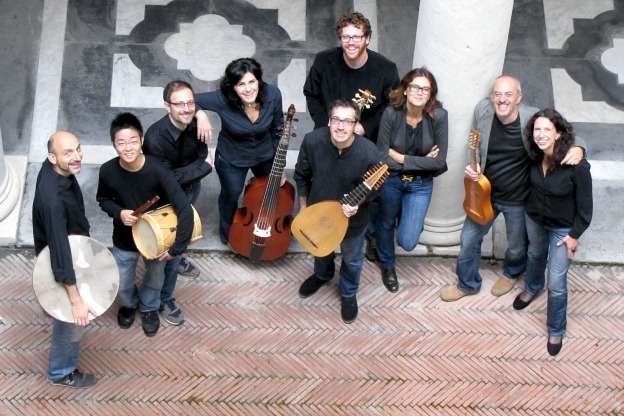 If you had a car in 15th-century Italy, and if that car had FM radio and if you tuned in to the top 40 on your morning commute to your guild job in downtown Mantua, the greatest hits you might hum along with would probably be a type of song called a frottola.

Your parents’ music was so old school, “medieval” even, stodgy and mannered and complicated with that whole Ars Subtilior fad. Thankfully, now there was something new—something lighter and more straightforward, less sentimental and more fun. Three or four voices all harmonizing together with the melody line in the top voice made it easy to pick out. And the rhythms! They make you feel like grooving. The lyrics are catchy too—not in Latin, which is nice, because it’s not like you’d want to sing frottole in church anyway, what with all those suggestive puns and double entendres!

Yes, music in Italy at the cusp of the Renaissance was all about the frottola. A central hub for the new genre was in Mantua where Isabella d’Este supported two of the most important composers of frottole, Marchetta Cara and Bartolomeo Tromboncino. But music was about to become much less reliant on aristocratic patronage and much more commercial.

In 1501, Venetian publisher Ottaviano Petrucci made his first publication using movable type and the triple impression technique, and three years later printed his first 64 piece book of frottole, mostly made up of songs composed by Cara and Tromboncino.  This publication was so successful, Petrucci printed ten more frottole collections in the next 10 years.

The burgeoning business of printing no doubt helped spur on the new popular art of frottole by making it easier for composers' pieces to be more widely disseminated even outside a patron’s court. Let’s hear a bit of Caro’s Non e tempo d’aspettare.

For a while, Petrucci had a corner on the market in the frottole business, at least in Venice: he had gotten a “privilege” or a kind of patent or copyright from the Venetian senate for his printing innovations that gave him the exclusive right to print polyphonic music and lute tablatures there.

But he was not without competition! Others found ways around Petrucci’s privilege, with privileges of their own. Hand copied manuscripts still had their place too, with scores of minor composers and anonymous contributors—pros and amateurs, high and low class alike—filling the repertory.

The frottola eventually gave way to the more ubiquitous madrigal, but in many ways looked even beyond the madrigal to Baroque monody, foreshadowing its prominent melodic line and functional harmonic bass.

We’ve been featuring the consort and vocal quartet Ring Around on this episode of the podcast.  The group has been concertizing since 1993, and their Naxos recording Popular Songs of Renaissance Italy was just released earlier this year.