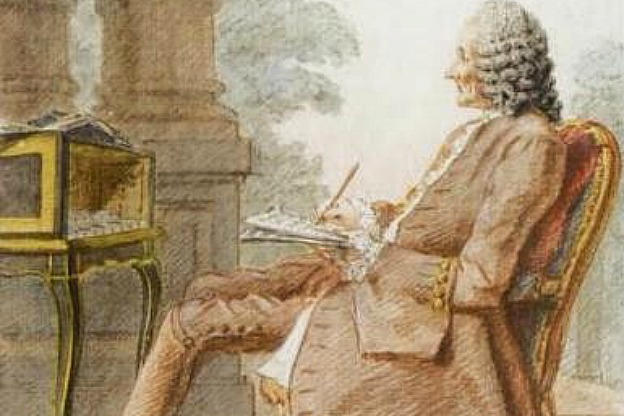 What’s better than one harpsichord? Two, of course!

Rameau originally scored his Concerts for solo harpsichord with violin and bass viol (or alternatively flute or a second violin).

Arranging Rameau’s famous pieces for two harpsichords seemed like a natural thing to do for Mireille Podeur and Orlando Bass. And performing them this way isn’t without precedent: Rameau himself was an avid music arranger. During the course of his life, he took the catchiest tunes from his popular stage and orchestral works (like Les Indes Galantes) and arranged them into suites for harpsichord. He went the other way too, often orchestrating his favorite harpsichord pieces for larger ensembles.

Rameau wasn’t alone. Other composers and performers did this kind of arranging too. François Couperin and Gaspard Leroux both indicated that their trios with basso continuo could instead by played by two harpsichords, and warhorse composers like Bach and Handel were constantly arranging and re-arranging their own music as well.

Leroux, Couperin, Bach, Handel... So in the spirit of things, why not add Mireille Podeur and Orlando Bass  to the list!

For the harpsichord duo, making their recording was a culmination of an intense year of work. In their notes on the program, they described the process as a “practical experiment at the keyboard informed by historical performance practice and galvanized by the prospect of ample opportunities for improvisation.” Those ample opportunities for improvisation present themselves on the repeated sections in many of the tracks on this recording.

Here’s a fun one: in the Quatrième Concert, Bass and Podeur make inside jokes with their added ornaments and improvisations by quoting little snippets from some of Rameau’s other pieces, namely La Poule and L’Égyptienne. It’s especially fitting here because the particular movement is titled La Rameau, and it's the composer's own little musical self-portrait.

Hearing musical quotes as a part of the ornamentation for a different Rameau work is really fun if you’re already pretty familiar with Rameau’s pieces. But, if you’re not, it’s still fun to follow along in the score so that you can see just how the performers improvise and add ornaments not reflected on the page. Here's a link to the manuscript if you’re curious!  Score of La Rameau.

L'agaçante is the title of a movement from the Deuxième Concert. The liner notes tell us that a dictionary from Rameau’s time defines the root of the word Agaçer  as “the thousand and one little things a woman does to attract the attention of someone she is not disinclined to fall in love with.” How is that for a definition!

Rameau’s L'agaçante is a flirtatious little piece. And who knows? But you have to wonder if Rameau had someone in particular in mind when he wrote it!

You can sometimes get steamrolled by the thick texture of two harpsichords playing together, especially with all the trills and twiddly bits of Rameau’s writing. But I enjoyed the clarity of well aligned articulations between the two performers on this disc.

Tuned to A=407, it’s a big, full and muscular sound but with plenty of definition, and that makes all the difference. It doesn’t hurt that the instruments used on this recording are also very well-matched: Podeur and Bass performed on a restored anonymous Flemish harpsichord from 1748 and a copy of that instrument made by Laurent Soumagnac on loan from the Atelier du Clavecin collection at Chaumont en Vexin.