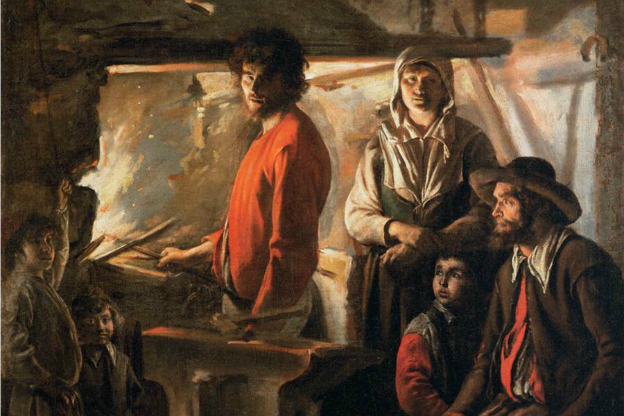 Ever hear the expression, "Don't quit your day job?"

This hour, we'll hear music by composers who did leave their first careers, or at least moonlighted, to create music of lasting power. Plus, we'll explore the flute in the renaissance consort, as well as in our featured recording by Kate Clark.

A consort combines different sized instruments of the same family, or in the case of a broken consort, mixes instruments from different families. As part of an ongoing exploration of the renaissance consort, here's a bit about the flute.

Like most instruments during the 16th century, flutes were constructed in different sizes, from treble to bass. Flutes complimented the voice or instruments from other families, and they also played together in consort.

Prior to the 18th century, flute and transverse flute were two entirely different instruments. The term "flute" or flauto referred to the end-blown recorder, but music that called specifically for a side-blown flute was marked with the terms transverse, traversiÃ¨re, or traverso.

We know from Chansons musicales-a collection of popular songs published by Pierre Attaingnant around 1530-what pieces were considered more suitable for flute consort versus recorder consort.

Like a lot of fathers, Georg Handel wasn't crazy about the idea of his son becoming a musician.Â Law was a nice, stable career, and Georg was determined that young Georg Frideric would have a stable future. His son's fever for music would surely pass.

But within a year of enrolling at the University of Halle, the young Georg Frideric Handel dropped out of school to immerse himself in the highs and lows of opera. When the celebrated composer died a half-century later, 3,000 mourners attended his funeral.

Handel wasn't the only composer who dabbled in another career field. Coming up, we'll hear music by cabinet makers, poets, world leaders, and others who ducked-or bucked-their non-musical lives to compose music of lasting power.

From the law to the lathe

Composer Giles Farnaby worked as a professional joyner, or furniture maker, in renaissance England. With his cousin, he may also have built virginals and clavichords. According to contemporary records, though, he wasn't very successful: in 1596, Farnaby's local church, St. Olave Jewry, granted him an annuity because he was [quote] "overcharged with children and his trade decayed."

Here are two short pieces by Farnaby from the Fitzwilliam Virginal Book.

When we think of getting a day job, "poet" isn't usually what comes to mind. But most of the work that survives by medieval composer Guillaume de Machaut wasn't music, but poetry! And lots of it: Machaut's narrative poems, called dits, often topped 9,000 lines. His music was not quite so long-winded, as we can hear in the motet De Souspirant Cuer.

But perhaps the best day job of all is...king! Henry VIII, best known for divorcing and beheading, was an avid patron of the arts. During Henry's reign, the count of musicians at court leapt from five to 58, and Henry himself sang and played lute, organ and virginals.

Despite a busy schedule of schisms and schemes, Henry also managed to compose.

We return to flutes in our featured recording from early music performer Kate Clark, who specializes in historical flutes.

Clark also uses a fully diatonic Baroque flute on this recording. The instrument we'll hear last is a copy of a model championed by the 18th-century Hotterre family of musicians, instrument builders and composers.Â We heard music composed by Jacques-Martin Hotteterre on a Hotteterre model flute. Kate Clark and Nigel North were joined by viola da gambist Freek Borstlap for that performance.

The writers for this edition of Harmonia are Anne Timberlake, Laura Osterlund and Janelle Davis.