The Book of Psalms figures prominently in the Hebrew, Christian and Islamic faiths alike. This hour on Harmonia, Psalm 2 is the star of the show. It’s about anger in the world and people railing against authority, and it begins, “Why do the nations rant? Why do the peoples rave uselessly?” We’ll hear a variety of settings—some intended for large forces and public situations, others for singing at home. Plus, our featured recording is Cantica Obsoleta by the ensemble Acronym, a collection of as-yet unknown pieces from unpublished manuscripts in Sweden.

From the Dufay Collective’s 1993 Chandos recording, Dance in the Garden of Mirth, we heard an anonymous Italian dance called a “saltarello,” from a fourteenth century manuscript.

The Psalter, or the Book of Psalms, is an important part of the liturgy not only for Jews, Catholics, Anglicans, and Protestants, but also for Eastern Orthodox Christianity, Asian Christianity and the Islamic faith. They are chanted every single day; people in medieval European monasteries heard all 150 of them every week. The incoming youth were required to learn all the psalms in their first year, in Latin, of course, and they even conversed in psalm verses!

On today’s Harmonia, we’re going to take the chant out of the psalm and the psalm out of the monastery to visit it in several different settings. For any number of reasons, psalm 2 suggested itself almost immediately as the obvious choice. [Music begins] The psalm begins, depending on which translation you read, with the words “Why are the nations in tumult, and countries plotting in vain? or in Latin, “Quare fremuerunt gentes et populi?” “Why have the Gentiles raged, and the people devised vain things?” or this . . . [music up]

Sound familiar?  Of course it does – Part 2 of Messiah, just before the Hallelujah chorus! René Jacobs lead the Freiburger Baroque Orchestra, the Choir of Clare College, and, in this case, Neal Davies, bass, and Kobi von Rensburg, tenor, in the 2006 Harmonia Mundi France release of Messiah. Oratorios like Messiah are secular events that emerged in the 18th century during Lent, when professional singers were not busy with the opera and theatre, so we’re hearing the psalm in a public concert, itself a recent invention.

Handel’s librettist Charles Jennens used the Book of Common Prayer’s wording for the Psalms-- slightly different from the King James Bible. The BCP translations are drawn from Coverdale’s Great Bible of 1535, the first complete printed translation of the Bible into English. Henry VIII had set Matthew Parker, Archbishop of Canterbury, the task of justifying the printing of a Bible in English, previously considered heretical, a task that Parker accomplished brilliantly. Parker also made his own translation of the psalms and 1547. Archbishop Parker’s Psalter translates the psalms into vernacular metrical poetry, meant to be sung as hymns in church or at home. Their words are, as you’ll hear, seriously different from anything found in any Bible or Psalter.

Thomas Tallis composed 8 tunes for Parker’s Psalter. Psalm 2 is set to the third of the 9 tunes. It became known as “the third mode melody” -- not because it’s the third setting, though, but because it is in the warlike Phrygian mode. As Parker himself described it “The third doth rage: and roughly bray’th.”

Andrew Carwood directed the Cardinall’s Musick in “Why fum’th in sight” on the 2013 Hyperion release Ave, rosa sine spinis and other sacred choral works, by Thomas Tallis. I expect that this tune sounded familiar, is it driving you crazy?  The version you may know has no words—it’s Ralph Vaughn Williams’ Fantasia on a theme of Thomas Tallis.

And now for something completely different: a setting of psalm 2 by the Polish church musician Wojciech Bobowski, who was enslaved by Crimean Tartars at the age of eighteen in 1628 and sold to the court of Mehmed IV at Constantinople. There he received an excellent education, converted to Islam, and changed his name to Ali Ufki. In a small collection of psalms, Ali Ufkî used original melodies from the Genevan Psalter, classified them according to the Turkish modal system and translated the metrical texts into Ottoman. Because of the peculiarities of French prosody, the Genevan melodies tend to be in asymmetrical meters, which brings them closer to Middle Eastern music. You’ll hear the original Genevan tune sung by the King’s Singers, then Ali Ufkî’s version performed by the ensemble Sarband.

Ali Ufki, an expat Polish musician, was the creator of the setting of Psalm 2 from the Genevan Psalter translated into the Ottoman language and a Middle Eastern music idiom. The King’s Singers and Sarband collaborated on the 2005 Signum Classics release, Sacred Bridges, to celebrate the symbiotic relationship between East and West using the psalms as sacred bridges between people, religions, and human beings.

Welcome back. We’re going to take a big step backwards in time so that we don’t miss out on a wonderful parody of psalm 2. The Roman de Fauvel is the early fourteenth century French story of a world turned upside down that is being ruled by an ass who personifies the seven vices incarnate – talk about timeless stories! The manuscript has lots of musical interpolations, and on the very first page we find a 2-voice motet that opens with the exact words of Psalm 2 in its Latin version “Quare fremuerunt gentes et populi?” Any educated person of the time would have heard the reference immediately. It then goes on simply to say that things are in a complete mess and Fauvel is to blame:

From the 1972 Studio der Frühen Musik Reflexe recording of the Roman de Fauvel, directed by Thomas Binkley. It’s not insignificant that the Studio’s Fauvel toured to great acclaim during the political turmoil of the late 60’s and early 70’s.

And finally, we’ll stay in France, but flip centuries once more and go to the Chapel Royale in the late seventeenth century to find that same Latin translation that Fauvel spoofed in a grand motet, conceived to be sung at Versailles. These grand motets were not selected according to the liturgy of the day, but rather according to laudatory rhetoric toward King Louis.

The Concert Spirituel was one of the first public concert series in existence, begun in Paris in 1725 and founded to provide entertainment during the Easter fortnight and on religious holidays when the theatres were closed, as we mentioned when we listened to our excerpt from the Messiah.

This Lully Grand Motet might well have been heard in a concert, and it was certainly heard at Versailles on April 19, 1685—perhaps at the beginning of a service, attended by all present courtiers, nobles and their retinues—to remind everyone how God intended King Louis to be his secular representative on earth. So . . . don’t mess with him . . .

Psalm 2 has not been forgotten. It continues to find its way into music, and of course it is still chanted by practitioners of many religions to this day.

For our featured release of the week, let’s turn to some forgotten music. The Düben Collection of some 2300 music manuscripts was assembled and named after a family of composers who were successive Kapellmeisters to the Royal Swedish Court. Anders Düben the Younger donated the collection to Uppsala University Library. The vast majority of it has not been published in modern edition, much less recorded – until recently. This their third album including previously unknown sonatas from the collection, and the ensemble Acronym aptly names it Cantica obsoleta.

Johann Jakob Löwe von Eisenach, despite his name, was born in Vienna, trained by distinguished musicians, and in his early 20’s he was taken on by Heinrich Schütz, who remained his mentor for most of his career.  Here is his sonata for 6, in Eb major.

The only known surviving composition by the 17th century Venetian singer Caterina Giani, wife of the prominent Venetian composer Massimiliano Neri, is a motet scored for solo high voice, two violins, and continuo, and includes a realized tablature part. The text is sort of an all-purpose prayer to Jesus.

Like Löwe, Christian Ritter was another of the group of Dresden musicians in Schütz’ circle, though his musical contribution is very individual. Let’s finish our visit with the ensemble Acronym by hearing Ritter’s setting of Psalm 51, a penitential psalm that begins “Have mercy upon me, O God, after thy  great goodness: according to the multitude of thy mercies, do away mine offences.” 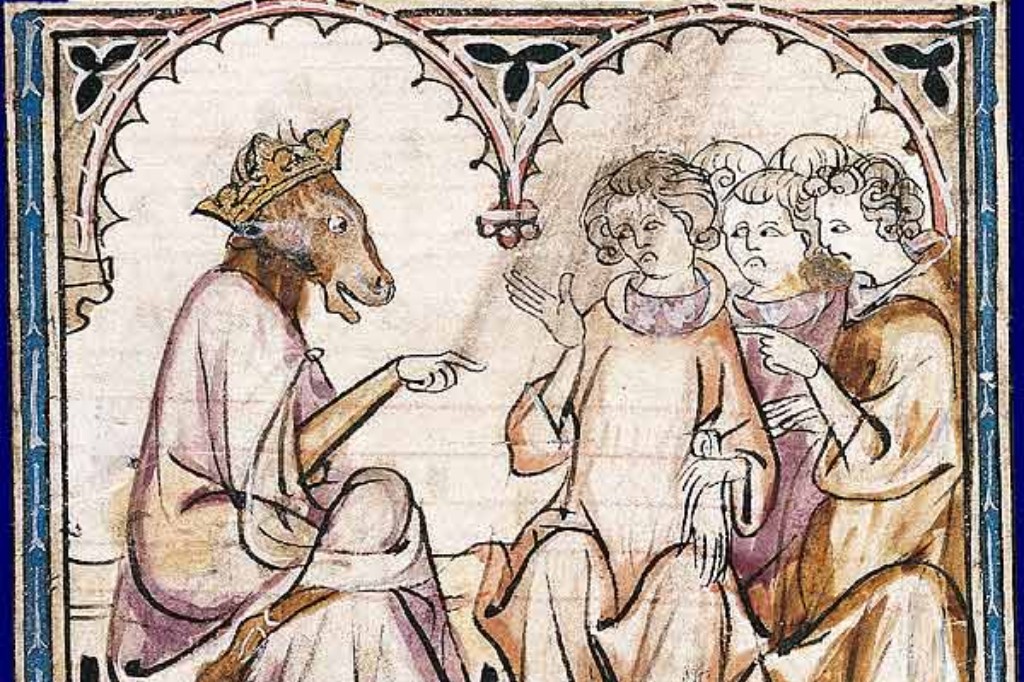 The Book of Psalms figures prominently in the Hebrew, Christian and Islamic faiths alike. This hour on Harmonia, Psalm 2 is the star of the show. It’s about anger in the world and people railing against authority, and it begins, “Why do the nations rant? Why do the peoples rave uselessly?” We’ll hear a variety of settings—some intended for large forces and public situations, others for singing at home. Plus, our featured recording is Cantica Obsoleta by the ensemble Acronym, a collection of as-yet unknown pieces from unpublished manuscripts in Sweden.