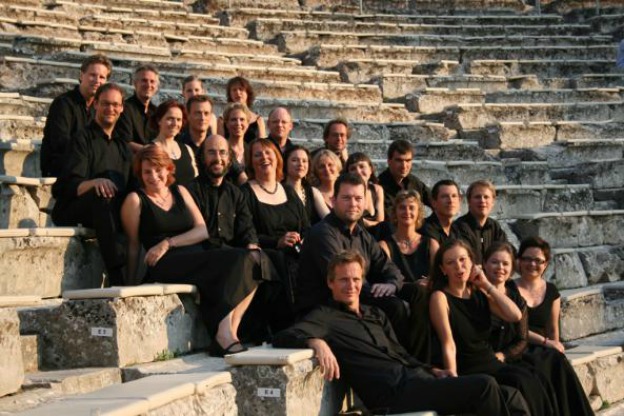 Pablo Heras-Casado and the Freiburg-based Balthasar Neumann Choir and Ensemble in a 2015 Archiv Produktion release of music by Michael Praetorius, Hieronymus Praetorius, and Jacob Praetorius.

Out of those three Praetorius’s, two, Hieronymus and his son Jacob are related. Michael Praetorius is from a different family altogether, albeit one who happened to share that same last name. Hieronymous and Jacob were from a lineage of organists who monopolized the best and most important church positions in Hamburg for the better part of a century. Michael on the other hand was based in northern Germany at the court of Wolfenbüttel and is best known now as a music theorist and for his famous dance compendium, Terpsichore. But Michael also contributed a vast sacred music repertory to the church.

Music on this recording from Michael Praetorius includes a setting of Mary’s song of promise and fulfillment that could have been heard as part of the usual 17th-century church liturgy. The Magnificat per omnes versus super ut re mi fa sol la of 1611 features an ascending hexachord referred to in the title (ut re mi fa sol la) as the underlying cantus firmus.

There is one other Magnificat setting included on this CD—in this case by Hieronymus—but the bulk of the recording is taken up by nine motets divided between the three composers. While they are sacred works, the motets fulfill an almost madrigalian model taking on the sensual texts from Song of Songs. The somewhat sparse liner notes for this recording are titled, “On Love, Passion, And Humanity,” and passion is nearly dripping from a motet by Hieronymus Praetorius with a text that begins, Vulnersti cor meum..."you have ravished my heart."

The various motets on this recording were likely intended for wedding celebrations: Jacob Praetorius’s motet Indica mihi was presented, as this recording's liner note tells us, as a wedding gift to his daughter Gesa on her marriage to the Danish organist Joahnn Lorentz. The closing text proclaims, “I am my beloved's and he is mine.”

Directed by Pablo Heras-Casado, this is solid and satisfying music making on the part of the Balthasar Neumann Choir and Ensemble, albeit a more massive and grandiose sound than other favorite Praetorius recordings. The voices, too, are nicely supported by a complement of instruments that includes violins and violas da gamba, organ and theorbo, dulcian, cornetto and trombones.