Harmonia Uncut: Piffaro “Back before Bach”

Welcome to Harmonia Uncut, where you can hear unedited recordings of medieval, renaissance, and baroque music that have been sent to us by the performers for your listening pleasure. I’m Wendy Gillespie.

In March of 2018, the renowned renaissance band Piffaro played a concert in Philadelphia that they called “Back before Bach, Musical Journeys.” Joan Kimball and Bob Wiemken, the artistic co-directors, sent us a couple of sets from this concert, each based, as the title suggests, on a well-known tune that Bach later used.

Let’s hear two sets from this concert. The first is based on the tune “Innsbruch ich muss dich lassen” by Heinrich Isaac. There’s a world wide demographic of a certain age who’ll remember the tune as the one played in the Olympics of 1964 in Innsbruch as the torch was extinguished. Some of them are undoubtedly also Lutherans who might recognize the melody as a hymn tune with the words, “O welt, ich muss dich lassen,” which Johann Sebastian Bach used in several of his cantatas. But before Bach, it’s all different. Get ready to hear an ensemble of bagpipes, lute, recorder and krummhorns – I’m not kidding – play an instrumental fantasie followed by a piece with a canon in the tenor part, then Isaac’s original setting of the song and finally, an anonymous piece entitled “Zu Regensburg,” all based on the same tune.

That was the renaissance band Piffaro performing live in Philadelphia in March of 2018, a group of settings of the tune “Innsbruch ich muss dich lassen.” Let’s hear another set from the same concert, this one based on the fifth century Latin hymn “A solus ortus carmine,” which recounts the nativity, miracles, and passion of Christ. Luther translated the first seven verses as the hymn, “Christum wir sollen loben schon,” which ultimately became the main Protestant Christmas hymn, and Bach wrote a chorale cantata based on it. We’ll hear the hymn, then six different settings of the tune by the ever famous anonymous, a couple by Johann Walter, Praetorius, Scheidt, and finally, JS Bach.

The ten versatile musicians of Piffaro stylishly playing bagpipes, recorder, krummhorns, lute in the first set, and all recorders and lute in the second set,  always, always with incredibly nuanced intonation. Joan Kimball and Bob Wiemken are the artistic co-directors of Piffaro. We are very grateful to them for sending this stunning recording of their March 2018 performance in Philadephia.

We’re interested in your thoughts about anything you’ve heard on this podcast. You can leave a comment or question on our Facebook page. This has been the Harmonia Uncut podcast, I’m Wendy Gillespie. 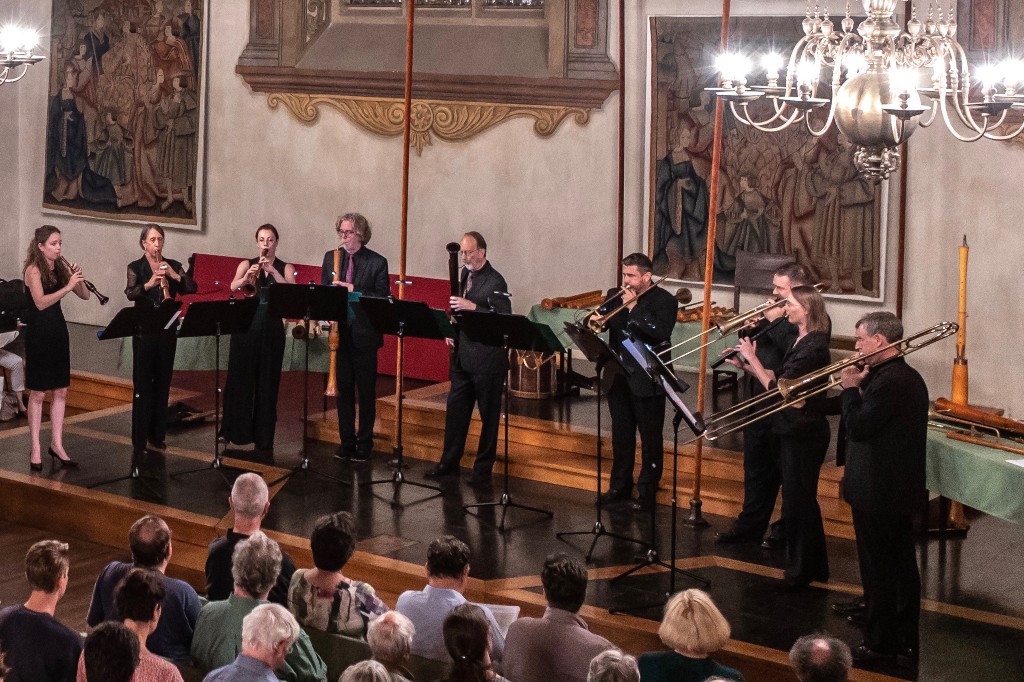 The very first in our series is going to set the bar very high, as we’ll hear the renowned renaissance band Piffaro play excerpts from their March 2018 Philadelphia concert “Back before Bach.”