Around the turn of the seventeenth century, European composer-performers were engaging in lively experiments with instrumental music clearly intended to capture the attention. Jan Pieterszoon Sweelinck and Girolamo Frescobaldi rose to great fame and saw their keyboard music reach publication—the New Music of the time.  Ricercadas, partitas, toccatas, sonatas, fantasias—the names of the pieces evoke mystery, searching, musical rhetoric, and invention; and previously wordless instruments become characters in a musical drama. No wonder one listener called what he heard a stylus fantasticus!

Reinhart Goebel and Musica Antiqua played the famous Canon and Gigue in D Major by Johann Pachelbel. Would you be intrigued to learn that the only remaining source of the piece is actually a nineteenth-century copy of the score that has no tempo indication of any kind like “Largo,” or “Allegro?”

Instrumental music that was neither vocal music played instrumentally, nor music meant for dancing, has doubtless existed for as long as there have been musical instruments. But very little of it made it onto paper at all, much less to publication, until around the turn of the seventeenth century, when composers were, for the first time, able to gain a reputation in Europe by writing strictly instrumental forms. Their new pieces had names like “ricercata,” “fantasia,” “toccata,” and even “sonata,” and their evolving forms allowed their composers tons of freedom.

In 1650, the Jesuit polymath Athanasius Kircher, who lived in Rome, was the first to describe this new phenomenon. He cites a specific piece in particular about which, he says, [quote] “it seems that nothing at all can be missing; and therefore we consider it to be set out before all organists as a most perfect example of composition of this kind, which they might imitate.” The piece is by a student of Kircher who had studied keyboard with Girolamo Frescobaldi - a perfect place to begin.

It is the most free and unfettered method of composition, bound to nothing, neither to words, nor to a harmonious subject. It is organised with regard to manifest invention, the hidden reason of harmony, and an ingenious, skilled connection of harmonic phrases and fugues. [unquote]

And he mentions Froberger’s keyboard teacher, Girolamo Frescobaldi (who, remember, lived in his neighborhood, and whom he almost certainly heard in performance), as a master of the stylus phantasticus. Listen to a Frescobaldi Ricercar sopra Mi re fa mi (sing it!), whose similarities with the Froberger you may hear.

Gustav Leonhardt played Frescobaldi’s Ricercar sopra MI RE FA MI on the 2005 Vanguard Classics’ The Art of Frescobaldi: Masterpieces of the Italian Baroque. Do you hear the similarity to the approach we heard in Froberger’s piece, with varied rhythm?

Later takes on the stylus fantasticus, from the eighteenth century right up to the present, run with Kircher’s idea and spice it up with improvisational license and interpretive freedom, and Frescobaldi remains a shining example. Perhaps as an instrumental answer to early opera, the idea grew to include experimentation with sudden shifts in tempo and tonality, and a general aim of amazing the listener with virtuosity and contrast.

Here’s an example: Viola da Gamba Sonata in B-Flat Major by David Adam Baudringer, about whom as yet little is known except that his name is loosely associated with Dieterich Buxtehude . . .  but we’ll go out on a limb based on this piece and guess that he was a viola da gamba player…

Welcome back. The influential, wealthy Hapsburg court at Vienna was very interested in Italian music, not least through the influence of Froberger, who was a court musician there for many years. Italian composer-performers found employment in Germany. Here, for example, is a Sonata for three instruments (with continuo) by Antonio Bertali, who was educated in Italy but was hired by Archduke Ferdinand before he even turned 20 and went to Vienna for the rest of his life.

Antonio Bertali’s Sonata a 3 was performed by the Yale Collegium Musicum, Director Simon Carrington. Isn’t it interesting how easy it is to nearly turn the instruments into characters?

Dieterich Buxtehude is nearly universally associated with the stylus fantasticus, and far be it from us to exclude him. There is some argument among scholars about which of his organ music best illustrates the style, but here is a sonata and suite in Bb for violin, viola da gamba (hmmm, could he be writing for Baudringer?) that reflect the increasingly rhetorical nature of instrumental composition, an early representative of the “doctrine of the affections” and predecessor of empfindsamer Stil, or "Sensibility style."

Dieterich Buxtehude’s Sonata and Suite in Bb Major was performed by the aptly named ensemble Fantasticus on their eponymous Resonus Classics 2014 CD.

Born in Lübeck in the same year that Kircher first talked about the stylus fantasticus, David Petersen worked in Amsterdam all his life, and his music comprises our recording of the week, music from his 1683 publication Speelstukken. Petersen was one of a group of Dutch composers who were overshadowed by the Italians in the early 18th century, but luckily for us his work has come to light again. Here is his Sonata No. 12 from 1683.

Clearly, the term “sonata” meant something rather different in 1683 than it had previously, and likewise, in 1683, “sonata” meant something rather different than it would mean in 1783! We heard all but one movement (a saraband) of David Petersen’s Sonata No. 12 from his Speelstukken, performed by Manfredo Kraemer and the ensemble intriguingly named The Rare Fruits Council on their 2016 CD on the naïve classique label, our featured release of the week. 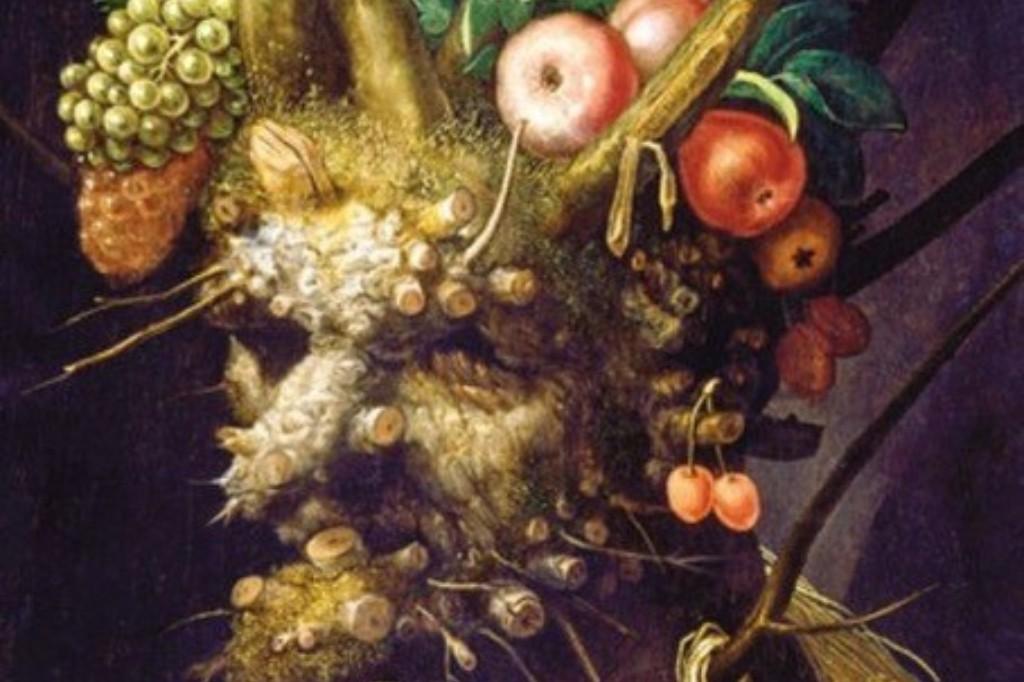 Cropped segment of the painting Four Seasons in One Head by Giuseppe Arcimboldo. (Google Art Project)

Around the turn of the seventeenth century, European composer-performers were engaging in lively experiments with instrumental music clearly intended to capture the attention. Jan Pieterszoon Sweelinck and Girolamo Frescobaldi rose to great fame and saw their keyboard music reach publication—the New Music of the time.  Ricercadas, partitas, toccatas, sonatas, fantasias—the names of the pieces evoke mystery, searching, musical rhetoric, and invention; and previously wordless instruments become characters in a musical drama. No wonder one listener called what he heard a stylus fantasticus!