Percival, Tristan And The Holy Grail 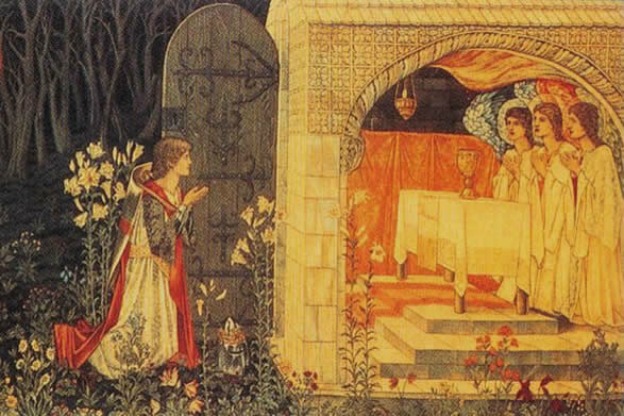 Legends of the Holy Grail have inspired poets, writers, musicians, artists and actors for centuries. Remember Dan Brown’s Da Vinci Code? Or Alfred Lord Tennyson’s 19th-century Idylls of the King? Or how about depictions of the Grail by painters Dante Gabriel Rossetti or Edwin Austin Abbey? And who could forget Monty Python, or Indiana Jones and his grail quest?!

Well, the fascination continues for the Spanish ensemble Capilla Antigua de Chinchilla, who has recently released two recordings of Arthurian Medieval Music where the grail quest is a prominent feature.

The character of Percival features in many of the early Grail accounts in the Arthurian cycle. One of the first, by the 12th-century poet Chrétien de Troyes tells how Percival encounters the grail in his youth while staying in the castle of the Fisher King. Another mid 13th-century song by Tannhäuser, Staeter Dienest, also makes a direct mention of Percival and the grail.

In most versions of grail lore, the hero must prove worthy of the grail’s presence, and so knights were ever-striving for the highest code of honor and chivalry, especially in regards to women. The trouvère song D’amors, qui m’a tolu a moi is all about that aesthetic of courtly love so sought after by the knights. Composed by the aforementioned Chrétien de Troyes, the text references another Arthurian character, Tristan, who is the theme of the second CD featured today from Capilla Antigua de Chinchilla.

As the story goes, Tristan, who also partakes in a quest for the holy grail, goes abroad to bring back Lady Iseult as a wife for his uncle King Mark. But along the way Tristan and Iseult swallow a magic love potion falling madly in love before ever even reaching King Mark. There are lots of versions for how this story ends, but in one, Mark mortally wounds Tristan with a lance while Tristan plays a harp for Iseult.

Tristan's involuntary love due to the magic potion is referenced in a poetic text by Heinrich von Veideke. In the in the spirit of contrafacta, Capilla Antigua substitutes this text into the music of an anonymous 14th-century Italian piece.

In the  trouvère song, La douce voiz du louseignol sauvage,  the poet Le Chatelain de Coucy compares his own situation to Tristan’s. In love, Le Chatelaine de Coucy was never lucky with the Lady of Fayel, and legend holds that after his death the poet’s heart was fed to his lover by her jealous husband.

Tristan turns up again in a piece by Bernart de Ventadorn, a well known troubadour who served at the court of Eleanor of Acquitaine, and Eleanor was the mother of Richard the Lionheart. This military leader and warrior, who spoke both the langue d'oïl and langue d'oc, is said to have composed the song Ja nuls homs pres while imprisoned during the Third Crusade of 1192. Often performed in the langue d’oïl, the medieval language of Northern France, Capilla Antigua instead performs here in the langue d’oc.