For more than 600 years, the Ottoman or Turkish Empire governed much of the Mediterranean and Western Asia, longer than the Roman Empire lasted in the region. As relations with Christian Europe ebbed and flowed, Ottoman culture left a huge impact on the arts, from architecture to opera. This hour, we’ll explore some of the ways this relationship played out musically over the centuries. We’ll hear imitations of Turkish music in early Western sources as well as music with early Ottoman origins that survive in Turkish tradition. Plus, our featured recording is Ensemble Animantica with Venetian, Greek, Ottoman, and Sephardic music from the time of the Cretan War.

Schola Hungarica performed chants from the Istanbul Antiphoner, a richly decorated collection of prayers for the liturgical year that originated in Hungary around 1360. It was taken to Turkey during sixteenth-century Ottoman conquests in the region and preserved in the library of the Topkapi Palace in Istanbul. / We heard antiphons for St. Andreas and St. Benedictus the Hermit / on Schola Hungarica’s Gregorian Chants from Medieval Hungary: Vol. 7.

We’ve all likely encountered Mozart’s famous “alla Turca” at some point or another, the final allegretto of his Piano Sonata K. 331:

But what makes it Turkish? And why were eighteenth-century Viennese aristocrats so obsessed with Turkish culture? The answers to these questions aren’t simple, of course, but embroiled in centuries of constantly shifting power dynamics: war and peace, fundamentalism and tolerance, cultural exchange and xenophobia.

During Mozart’s lifetime, the Ottoman Empire was much less of a threat to the region’s Habsburg powers than it had been a century prior. But let’s jump back a few centuries, to one of the first major conflicts between the Ottoman Empire and Christian Europe. In May of 1453, the forces of Sultan Mehmed the Second captured Constantinople, displacing Emperor Constantine the Eleventh and effectively ending the Eastern Roman or Byzantine Empire. At the intersection of Europe and Asia, the Mediterranean and Black seas, Constantinople’s geographical value was nothing short of immense. Its fall to the Ottomans secured their empire’s prosperity in the centuries to come, and also triggered a diaspora of Greek Christian scholars to Italy. The ancient texts they brought with them and translated influenced the revival of interest in Greco-Roman knowledge known as the Renaissance.

Let’s hear two laments for the fall of Constantinople: one by Orthodox composer Manuel Chrysaphes, a singer in Constantine’s chapel who experienced it firsthand; and another, from a distance, by Guillaume Dufay.

The Ottoman Court developed distinctive musical practices during this time, assimilating parts of Arab, Persian, Byzantine, and Armenian traditions as well as practices popular at other Islamic courts. Musician and poet Abdulkadir Meragi, born in the region of Iran in the late fourteenth century, was in demand across the Islamic world and dedicated a book “On the purpose of music” to Ottoman Sultan Murad* the Second in 1415. His music theory continues to influence Turkish traditional music of today.

“Agir semai,” a song in the musical mode Pencgâh Makam with a text by fourteenth-century Persian poet Hafez and fifteenth-century music by Abdulkadir Meragi, performed by Doulce Mémoire and (Turkish group) the Kudsi Erguner Ensemble.

The arts flourished at the Ottoman court during the long reign of Sultan Suleiman the Magnificent during the sixteenth century. Some prominent court musicians began as devshirme, children enslaved from distant regions of the empire to become soldiers, politicians, or clergy. Elite devshirme were educated in the palace school as scholars and artists, including intensive musical training. This was primarily oral, involving years of private study and memorization of the makams, modes and melodic structures, and usul, metrical and rhythmic formulas, at the foundation of Turkish music.

One such case was Ali Ufki, born Wojciech Bobowski, a young Polish Church musician captured by Ottomans in the 1630s. He was brought to the court of Sultan Murad the Fourth where he converted to Islam and trained as a musician. He wrote down hundreds of the Ottoman songs and instrumental works he learned using Western staff notation in two anthologies that survive today.

A love song in the Turkish form and meter usul Sama’i by Ali Ufki on a text by thirteenth-century Sufi poet Fakhr al-Din Iraqi. Performed by Constantinople and Marco Beaseley led by Kiya Tabassian.

A few more major conflicts with Christian Europe took place during this period. Sultan Suleiman’s army besieged Vienna for two weeks in 1529, and in 1571 the navy of his successor Selim the Second was defeated by a coalition of Catholic forces known as the Holy League near Lepanto in Venetian-controlled Greece. The Battle of Lepanto was a major victory against Ottoman control in the Mediterranean, and it was widely commemorated across Europe, including in music. Next up is a motet by Jacobus de Kerle in honor of the victory at Lepanto.

The last significant battles with members of the Holy League would take place in the second half of the seventeenth century. Viennese composer Johann Joseph Fux was in his twenties when the Ottoman Army laid siege to the city again in 1683. While Holy League forces were ultimately victorious, the siege lasted two months, and Fux’s exposure to Ottoman military music during that time may have informed his Partita "Turcaria," a suite for two violins and continuo.

Further West, where anxiety about military conflict with the Ottomans had always been lower than on the borders of their empire, Turkish culture had long been a source of curiosity. The French term “turquerie” has come to describe Western imitations of Ottoman culture in art forms such as fashion, painting, and music.

Among the named dances in Salamone Rossi’s third collection for two instruments and continuo published in 1613 is a galliard called “La Turca.” We’ll hear the Pera Ensemble’s version with the addition of traditional Turkish instruments.

The lavish musical spectacles at the court of Louis the Fourteenth frequently involved exoticizing portrayals of foreign cultures. Court composer Jean-Baptiste Lully set Molière’s play Le Bourgeois Gentilhomme as a comedy ballet in 1670. M. Jourdain, the foolish, social-climbing protagonist, aspires to wed his daughter Lucille to a nobleman. Lucille’s lover Cléonte disguises himself as a Turkish prince to gain his father-in-law’s approval and informs Jourdain that as the father of the bride, he is to be ennobled in a grand ceremony. This ceremony, which takes place at the end of act four, is an unflattering parody of Turkish culture and Islam from the perspective of French courtiers. The ceremonial dialogue is written in Sabir, a hybrid Mediterranean trade language, rather than Turkish, and the score features the percussive style associated with Ottoman music. Let’s listen to the instrumental interlude before Act 4, the “Marche pour la ceremonie turque.”

Jean-Philippe Rameau’s opera-ballet Les Indes galantes is among the most tangible musical examples of the French imperial worldview in the eighteenth century. Each of its four entrées sets a love story in a foreign locale: Turkey, Peru, Persia, and the Mississippi Valley. In the first, Le Turc genereux, Grand Vizier Osman Pasha magnanimously frees his French slave girl Émilie after she discovers her fiancé survived their capture.

Our featured release this hour is Candia 1669: Venetian, Greek, Ottoman, and Sephardic Music at the Time of the Cretan War, a 2017 recording by Ensemble Animantica in collaboration with Ensemble Daramad on the Bologna-based Bongiovanni label. Part of the longstanding territorial struggles between the Republic of Venice and the Ottoman Empire, much of the Cretan War took place around the Greek island of Crete and its largest city, Candia. Ensemble Animantica’s album aims to recapture a glimpse of Candia’s diverse soundscape at the time of the conflict.

We’ll close with a track inspired by the multicultural atmosphere of a city like Candia in the late seventeenth century. The traditional Ladino “Avram avinhu” is paired with an Ottoman-Greek dance.

We heard Ensemble Animantica performing Avram Avinu and Hicaz Mandira on this hour’s featured recording, Candia 1669: Venetian, Greek, Ottoman, and Sephardic Music at the Time of the Cretan War.

The writer for this edition of Harmonia was Chelsey Belt. 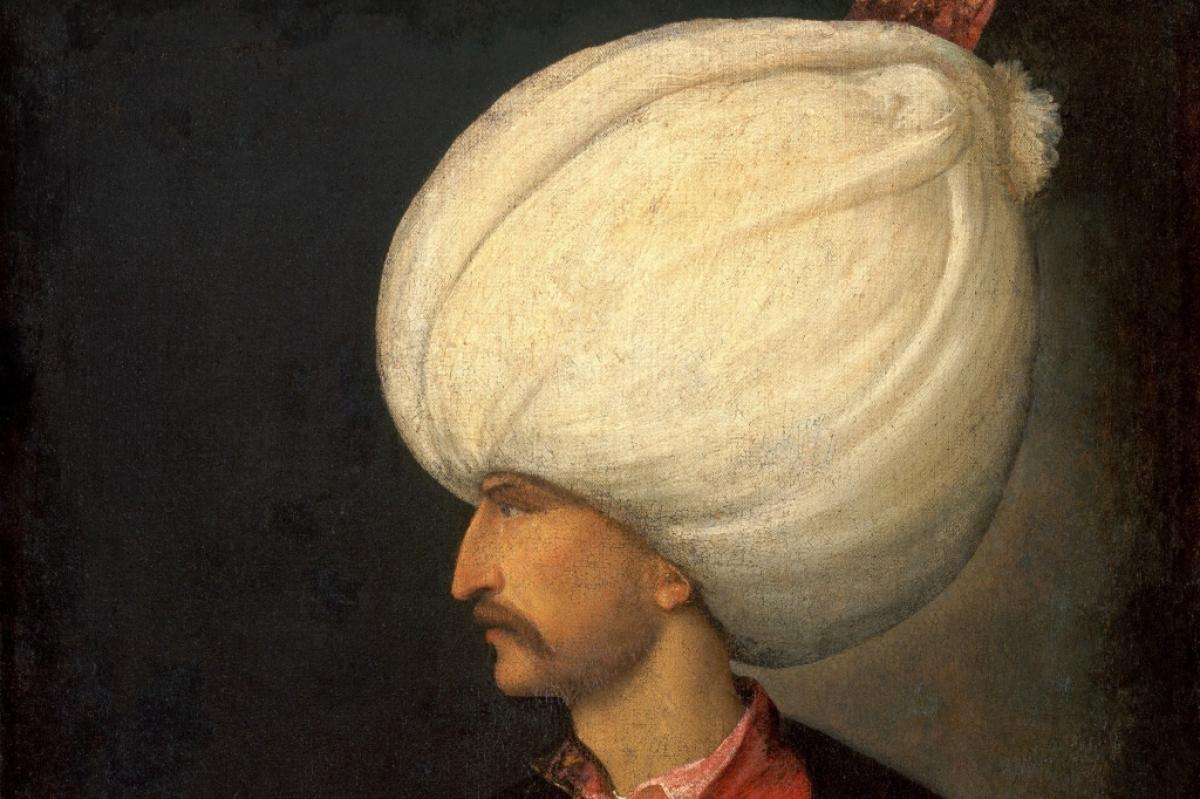 Portrait of Suleiman the Magnificent by Titian, c.1530 (VladiMens, Wikimedia)

For more than 600 years, the Ottoman or Turkish Empire governed much of the Mediterranean and Western Asia, longer than the Roman Empire lasted in the region. As relations with Christian Europe ebbed and flowed, Ottoman culture left a huge impact on the arts, from architecture to opera. This hour, we’ll explore some of the ways this relationship played out musically over the centuries. We’ll hear imitations of Turkish music in early Western sources as well as music with early Ottoman origins that survive in Turkish tradition. Plus, our featured recording is Ensemble Animantica with Venetian, Greek, Ottoman, and Sephardic music from the time of the Cretan War.