Of the nearly one thousand lines of poetic verse in Virgil’s Aeneid, four lines were set to music by many of the most famous composers of the late fifteenth and sixteenth centuries. Why these four lines? On Harmonia this hour, we’ll find out why, and listen to gorgeous polyphony by Josquin, Mouton, Agricola, Lassus and more. Plus, music recorded live by the Peabody Consort on our featured release, Music of Three Faiths, coming up later in the program.

Henry Purcell’s With drooping wings, the final chorus of his opera Dido and Aeneas, as they mourn for poor Dido. That performance was by Le concert spirituel, directed by Hervé Niquet, director, from a 2001 Glossa CD also entitled “Le concert spirituel.”

Listeners who are familiar with the music of Henry Purcell are likely to know that Dido and Aeneas is probably his best-known opera, and in that opera probably the best-known aria is Dido’s Lament, “When I am laid in earth.”  But long before the time of Purcell, the four lines of Virgil’s Latin epic “Aeneid” that begin with the Latin “Dulces Exuviae” and contain Dido’s last words,  were well-known to the literati. Here is a translation:

Objects dear to me, while divine fate allowed it:
receive this life and release me from these troubles.
I have lived; and the course that fortune had allotted to me I have fulfilled;
and now the great ghost of myself will go beneath the earth.
I have erected a noble city; I have seen my own fortification walls.
When I had avenged my husband, I exacted the penalty from my brother, our enemy.
Happy--alas, too happy--if only
the Trojan ships had never touched our shores!

Virgil gained immortality in the Renaissance not through his hero Aeneas, but through his broken queen Dido, a victim of fate and spurned love. Virgil himself might never have imagined a future in which he would be hailed as a prophet of a Messiah or an inspiration for dozens of musical compositions. But without the reception of his texts as Christian allegory, the fascination with Virgil might never have occurred in the middle ages. Sacred interpretation caused the Aeneid to be canonized in the fifteenth century, and this allowed Dido to be reborn as an unwitting victim and not relegated to the role of godless temptress.

We don’t know the exact date of Josquin’s setting of “Dulces exuviae,” but the music illustrates his mature style, suggesting the period around 1500, and it appears to have acted as a precedent for later composers. Virgil’s poetic meter, known as dactylic hexameter, is the very essence of the classical heroic epic--but it clearly takes a back seat to Josquin’s interest in freely evolving contrapuntal lines.

Jean Mouton, called “the most gifted of Josquin’s emulators” by one musicologist, shows us his great admiration for Josquin in a rather special way, by taking the top line of Josquin’s setting and composing three new contrapuntal lines under it. Listen for the words “sub terras ibit imago,” “my ghost will go under the earth,” which you will hear descend in a moment of musical text painting:

Mouton’s student Adrian Willaert was elected maestro di cappella of St. Mark’s, Venice in 1527. His setting of Dido’s lament adds the four lines following what we’ve heard so far, yet it is nowhere near twice as long as Mouton’s, because he dispenses with lengthy flowing counterpoint and instead chooses a syllabic and at times note-against-note choral setting:

Let’s go back in time again and hear a setting of our verses by Marbrianus de Orto, a contemporary and friend of Josquin’s, which might in part account for the fact that almost nobody has ever heard of him. Marbrianus’ setting is very unusual for its time in its use of chromaticism that one might understandably imagine to belong later in the century, which certainly highlights the drama of the words.

Alexander Agricola lived around the same time as Josquin and Marbrianus but was not associated with Rome or the Papal Chapel in any way as far as we know. His “Dulcis exuviae,” one of the five mentioned earlier that are found on the CD The Spy’s Choirbook, displays a very wide range and the slightly quirky style that defines Agricola.

We heard Alexander Agricola’s “Dulces exuviae,” performed by the Alamire Ensemble, David Skinner, director, on their recording The Spy’s Choirbook.

Welcome back—this hour on Harmonia we’re listening to Renaissance settings of Dido’s lament from Virgil’s Aeneid. Another of the five “Dulces exuviae” settings in The Spy's Choirbook is by the composer whose signature is found in Florence as “Johannes Ghiselin alias Verbonnet,” another composer of the Josquin-Marbrianus-Agricola generation. Here is the Alamire Ensemble:

We heard Johannes Ghiselin’s setting of Virgil’s verses performed by the Alamire Ensemble, David Skinner, director, on their 2014 Obsidian CD The Spy’s Choirbook.

The last setting we’ll hear dates from much later in the century. It was published in Paris in 1570 and is by the renowned, prolific, and versatile Orlando di Lasso. Like most of the other composers, he begins his composition with line 651; but in this two-part motet, part 1 sets the first four lines in 5 parts, then the much longer part 2 goes into 6 voices for the remaining verses. The much longer length of this motet than any of the others we’ve heard is explained by the later style of composition, which allows phrases of text to repeat. The performers accompany a single voice by viols on all the other parts, a perfectly legitimate performance choice that perhaps personalizes Dido in a way that five or six voices might not.

Our featured release this hour is a CD called “Music of Three Faiths,” by the Peabody Consort and the Echoing Air Vocal Ensemble, recorded live in concert at the Indiana History Center in Indianapolis. The “three faiths” referred to are Christianity, Judaism, and Islam, all of which were strongly represented in medieval Iberia, and the program included traditional pieces from all three of those cultures. Let’s begin with one of the best known of the medieval Cantigas de Santa Maria, collected in the 13th century at the court of King Alfonso El Sabio.

Santa Maria strela do dia—Saint Mary, star of the morning, one of the medieval Cantigas de Santa Maria, from a CD called “Music of Three Faiths,” by the Peabody Consort, directed by Mark Cudek, joined by the Echoing Air Vocal Ensemble, directed by Steven Rickards.

The Arabic music of Andalusia was for the most part an oral tradition, but we have some of the poetry, particularly in the genres of the muwashshaha and zajal. Some of that poetry, in modern Arabic, still can be found in the Andalusian tradition in southern Spain and Northern Africa. This is a mwashah.

Music from the Andalusian tradition: a Mwashahah, played by members of the Peabody Consort, from a live-recorded CD called “Music of Three Faiths.”

The rich musical tradition of the Sephardic Jews stretches back many hundreds of years, but it is a living tradition, with new songs being created to this day. Many of the songs are very old, but many of the most well-known songs in the Sephardic repertoire are not medieval at all. In some cases, songs are difficult to date, considering the expulsion of the Sephardic Jews and Muslims from Spain at the end of the 15th century, which scattered both the people and their culture throughout the Mediterranean region and beyond. This one, Cuando el rey Nimrod, is a very popular tune from the Sephardic tradition.

Music from the Sephardic Jewish tradition, from a CD called “Music of Three Faiths,” by the Peabody Consort and The Echoing Air Ensemble, recorded live in concert in Indianapolis. 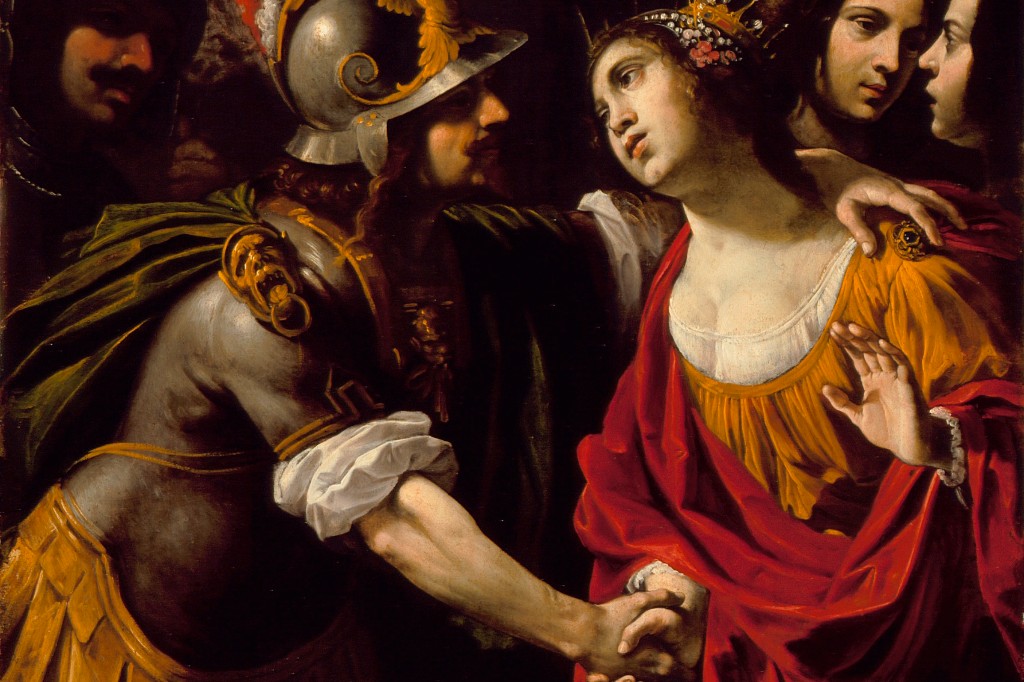 Of the nearly one thousand lines of poetic verse in Virgil’s Aeneid, four lines were set to music by many of the most famous composers of the late fifteenth and sixteenth centuries. Why these four lines? On Harmonia this week, we’ll find out why, and listen to gorgeous polyphony by Josquin, Mouton, Agricola, Lassus and more. Plus, music recorded live by the Peabody Consort on our featured release, Music of Three Faiths, coming up later in the program.