Not My Day Job

“Isn’t there anything else you’d like to do?” Just as they do today, parents of musicians of the past pressured their children to study in practical fields. Several historical figures who are now known for their day-jobs were avid composers as well. This week on Harmonia, we’ll explore music by lawyers, philosophers, and even a king! Plus, our featured release is Johann C. F. Fischer: Vesperae, seu Psalmi vespertini performed by Exultemus and Newton Baroque.

The University of Leipzig has a shockingly long list of law school attendees who decided to practice musical composition rather than the law. Graupner, Heinichen, Kuhnau, Telemann, and two of JS Bach’s sons, Carl Philipp Emanuel and Wilhelm Friedmann, are all affiliated with law at the university!

Johann David Heinichen enrolled at the University of Leipzig as a law student in 1702. He practiced law in the town of Weißenfels for several years, until his music career took over his time and attention in 1709. Here are the Larghetto and Allegro movements from Heinichen’s Trio Sonata in B-Flat Major.

One of Heinichen’s teachers was Johann Kuhnau. When Kuhnau started as a law student at the University of Leipzig, he also applied to be organist at St. Thomas Lutheran Church. His application failed, so he practiced law while also working towards improving his organ skills, eventually becoming organist and music director at St. Thomas. JS Bach succeeded Kuhnau at St. Thomas; Bach’s cantata writing is modeled after Kuhnau’s. We’ll hear the final aria and chorale, “How sweetly does the death knell toll,” and “With peace and joy I go on my way” from Kuhnau’s 1717 cantata “Ich habe Lust abzuscheiden,” I wish to depart.

The Chorale, “With peace and joy do I go on my way,” preceded by the aria, “How sweetly does the death knell toll.” Christoph Hesse led L’Arpa festante.

Although JS Bach ultimately succeeded Kuhnau at St. Thomas, Telemann was the first choice for the job. Telemann arrived in Leipzig in 1701, supposedly to study law. However, he immediately turned to musical pursuits: Telemann wrote for the Leipzig opera and set up a 40-member collegium musicum that pulled away many able musicians from Kuhnau’s choir at St. Thomas. Here is an aria whose title translates as “Nowadays it is only money which makes friends in the world.” This is from Telemann’s opera The Laughing Democritus, premiered in Leipzig in 1703. The aria is an adaptation of a love aria by Italian baroque composer Giovanni Bononcini, which compares a lover’s kisses to the scent of violets. In Telemann’s satirical version, however, which is in both French and German, the kisses are compared to a hearty meal that includes roasted meat, beer, and wine.

FromTelemann’s opera The Laughing Democritus:  “Nowadays it is only money which makes friends in the world.”

Though Telemann eventually turned down the St. Thomas Cantor post, he remained connected to Johann Sebastian Bach’s Family. Telemann was godfather to Carl Philipp Emanuel Bach. When Telemann died, CPE Bach took over his posts in Hamburg. Like Telemann, CPE Bach entertained the idea of a law career and enrolled at the University of Leipzig. It was apparent from a young age, however, that Bach would become a musician. We’ll hear the opening movement of CPE Bach’s Viola da Gamba Sonata in C Major, published in 1745.

“I prefer liberty with danger than peace with slavery,” said Genevan Enlightenment philosopher Jean-Jacques Rousseau-- famous for political theory, arguing for personal liberty and absolute democracy. In Rousseau’s educational writings, he advocated for children to learn through experience and nature rather than solely through books. Rousseau preferred Italian music to French music, arguing that melody should be always audible rather than having complex harmonies muddying the understanding of a beautiful tune. His opera The Village Soothsayer, however, comes across as very French—ornaments, complex harmonies, and all! Here is a pastorale and aria, “I am going to see my charming girl” by Rousseau.

Music from Jean-Jacques Rousseau’s opera The Village Soothsayer. That was “Pastoral for the villagers.” Before that, we heard the aria “I am going to see my charming girl,” featuring tenor Cyrille Dubois. Conductor Sébastien d'Hérin led Les Nouveaux Caractères.

When he wasn’t ruling the country, breaking from the Catholic church, or getting his wives executed, Tudor monarch Henry VIII of England wrote music in his “spare time.” He was also a passionate supporter of music—an embarrassment of riches is listed in Henry’s inventory including: shawms, bagpipes, recorders, crumhorns, viols, cornetts, several keyboard instruments, and many more. Next, its music fit for a king, and written by a king: “Pastyme with good company” and “Helas madam” by Henry VIII.

From England, we move to Bohemia, where Johann Caspar Ferdinand Fischer lived and worked. Although Fischer is today known for his keyboard works, he left behind a rich collection of sacred music for small choir and chamber ensembles. Our featured release, Vesperae, seu Psalmi vespertini, focuses on these sacred works of Fischer and his contemporaries. Here’s music from the title piece, Vesperae, seu Psalmi vespertini.

Music for Vespers, from the Vesperae, seu Psalmi vespertini by Johann Caspar Ferdinand Fischer. Vocalists were from Exultemus, directed by Shanon Canavin. Instrumentalists were Newton Baroque, led from the organ by Andrus Madsen. These two Boston area ensembles teamed up to make this, the first recording of Fischer’s vespers. Next, we’ll hear “Lauda Jerusalem” from Fisher’s Vesperae, seu Psalmi vespertini. 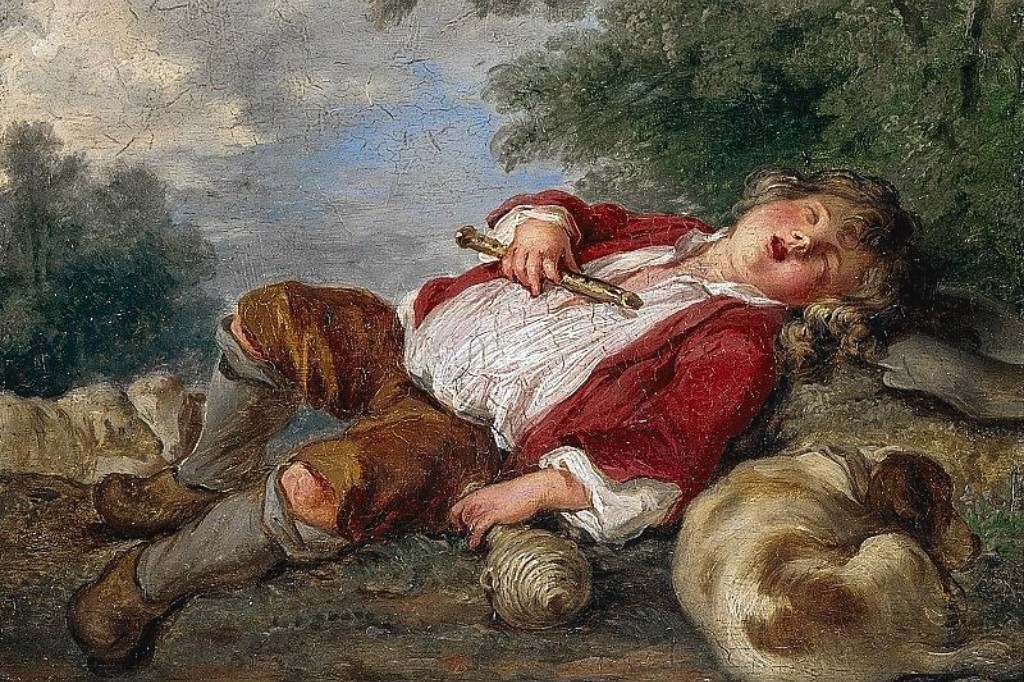 Asleep on the job. (From a reproduction (by Eloisa Mannion) of Francois Boucher’s “Sleeping Shepherd.”) (Fine Art America)

“Isn’t there anything else you’d like to do?” Just as they do today, parents of musicians of the past pressured their children to study in practical fields. Several historical figures who are now known for their day-jobs were avid composers as well. This week, we’ll explore music by lawyers, philosophers, and even a king! Plus, our featured release is Johann C. F. Fischer: Vesperae, seu Psalmi vespertini performed by Exultemus and Newton Baroque.