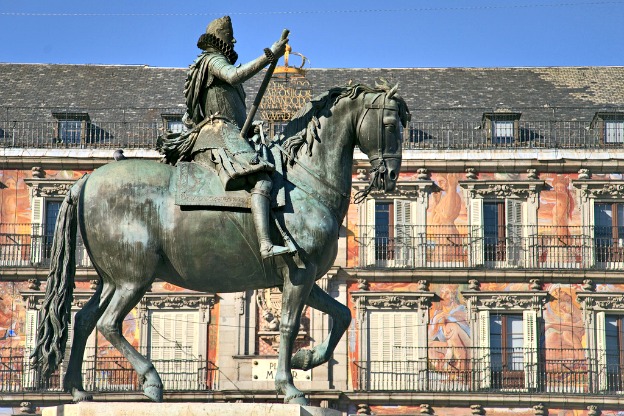 Time capsule for this episode: 1801

We're off on a musical tour of Madrid! Let's first make a stop at San JerÃ³nimo el Real, a sixteenth-century church and home for the Order of Saint Jerome. During the reign of Henry IV of Castile, the monastery was built beside the Manzanares River. Later Isabella I relocated the order to a second, less marshy site where a new cathedral was constructed.

In 1561, Philip II moved the Spanish court to Madrid and ordered the construction of a palace meant for rest and recreation, located next to the church site. A royal bedroom was established beside the residence of the parish priest, situating Philip within earshot of daily Masses.

Morales received exceptional classical education and musical training in his youth. From this foundation, his career carried him from posts at Ãvila and Plasencia to Rome. He is considered the first Spanish composer of international reputation, with copies of his numerous liturgical settings distributed throughout Europe and the New World.

Antonio de CabezÃ³n became blind in early childhood. Despite this, he worked as keyboardist and composer for Spanish royalty.Â In 1526, CabezÃ³n was employed by Isabella of Portugal, wife of Holy Roman Emperor Charles V.Â Following Isabella's death, he was appointed music teacher to Isabella's children, Maria and Joan. (Later in life, Maria would support the composer TomÃ¡s Luis de Victoria.)

From the fifteenth century onward, the city of Madrid enjoyed the flowering of a new musical genre. The villancico originated as a type of secular song with vernacular lyrics. The songs addressed common themes like hunting and other rustic pleasures. By the second half of the sixteenth century, the popular form was adapted to encompass sacred subjects. Spanish composers such as Francesco Guerrero composed sacred villancicos for paraliturgical use. The form was also cultivated by members of the capilla real espaÃ±ola, the royal choir of King Phillip II.

Twenty-eight miles northwest of Madrid is the Royal Seat of San Lorenzo de El Escorial.Â The site serves as monastery, royal palace, museum, and school. Construction of El Escorial began during the reign of Philip II. Philip intended the complex to house the remains of his parents Charles I and Isabella of Portugal, himself, and his descendants. He also envisioned El Escorial as a center of studies to aid the Counter-Reformation cause.

During the 16th and 17th centuries, El Escorial represented an architectural meeting point for both the Spanish monarchy and Roman Catholic power.Â Its monastery was held by members of the Order of St. Jerome. Among the members of the powerful religious order was composer and keyboardist Antonio Soler.Â During his time at El Escorial, Soler produced over five hundred compositions. Among these were approximately one hundred and fifty keyboard sonatas believed to have been composed for his pupil, Infante Gabriel of Spain.

On the last leg of our musical tour, we'll visit a monastery where one of Spain's most famous composers worked and resided.Â El Monasterio de las Descalzas Reales-literally the Monastery of Barefoot Royals-is situated in the former palace of King Charles I of Spain and Isabel of Portugal. Their daughter, Joanna of Austria, founded a convent for the nuns of the Poor Clare order in 1559. Throughout the remainder of the 16th century, women of all ages flocked to the convent to be housed.

TomÃ¡s Luis de Victoria worked at the convent for twenty-four years.Â He served as chaplain for Maria of Austria from 1587 until her death in 1603. Victoria's Missa pro defunctis, was composed for the empress's funeral service. Let's listen to the Kyrie from Victoria's Requiem Mass.

After Maria's death, Victoria continued to serve at las Descalzas Reales as convent organist. Records show that his income was sizeable and his freedom great. Victoria died in 1611, leaving behind numerous Mass settings, motets, and lamentations for Holy Week, and he was buried at the convent. Today, the exact location of his tomb remains unknown.

[See the full playlist by clicking on the "Music on this episode" tab above the image in this web post.]

Our featured release pays tribute to Armenia and the Armenian musicians who have performed alongside Jordi Savall in past years.Â On the recording Armenian Spirit, Hesperion XXI presents Savall's arrangements of anonymous traditional melodies alongside compositions from the 14th through 20th centuries.Â The album is in part a tribute to the late Montserrat Figueras.Â Figueras is said to have especially loved Armenian music and forwarded awareness of the country's turbulent history.

A prominent instrument in Hesperion's Armenian ensemble is the duduk (doo-dook), a double-reed instrument that is believed to have been played as early as the fifth century.Â Its earliest surviving examples are made of bone or cane. Unlike other double-reed instruments, such as the oboe or shawm, the duduk is played with a large, unflattened reed.Â Its sound has a haunting quality similar to that of a clarinet or saxophone.

Another instrument used in this recording is the kamantcha, a long-necked Persian fiddle (related to the bowed rebab). Traditional kamantchas have three silk strings, but today's instruments have four metal ones.Â A long spike that protrudes from the bottom of the instrument serves as a support during playing.