Music For The Holiday Season 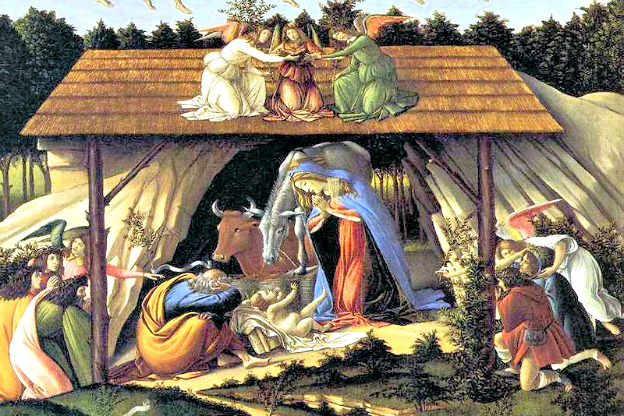 Let's start with some medieval music inspired by the life and miracles of Saint Nicholas: Anonymous 4 sings a 14th-century motet and a 13th-century conductus, followed by one of the most famous of all the medieval Nicholas songs-the one written by the former pirate-turned-religous-hermit named Godric around the turn of the 12th century.

By this time, the legends of Nicholas had grown to the point at which he was one of the most venerated of saints. In addition to being the patron saint of perfumers, pawnbrokers, unmarried women, choirboys, and towns stretching from Russia to Iceland, Saint Nicholas was also the patron saint of sailors and the shipwrecked, and it stands to reason that a former pirate would feel an affinity for him.

â€˜Tis the season to be jolly...reflectiveâ€¦thankfulâ€¦festive.Â You name it! Â Here's music from a variety of recordings to help set the mood.Â Perhaps you'll even discover the perfect early-music stocking stuffer, or music to play during a special holiday gathering.

Johann Sebastian Bach is probably the most famous cantor to work at the Thomaskirche in Leipzig, but he wasn't the first choice for the job! When the position opened up in 1722, Telemann was unanimously favored. He planned to come until his current employers in Hamburg gave him a raise. It was an offer he couldn't refuse, so he withdrew his application.

Graupner was then offered the job, but the same scenario played out.Â The Landgrave in Darmstadt, where Graupner was living and working, enticed him stay with a better salary and benefits.

Finally, the offer went to Bach who accepted and moved from CÃ¶then to Leipzig in the spring of 1723. Bach composed an impressive amount of church music during his years in Leipzig-roughly 300 sacred cantatas including this one first performed Christmas Day in 1734.

Winter, especially in Renaissance England could be long and cold. A tune from one of John Playford's publications has the wintery title, In the Fields of Frost and Snow. Â It's a somber melody, to be sure.Â But just maybe, the hardships endured during the long, dark season were lightened through gleeful madrigals. Â On this CD, the London-based ensemble Passamezzo,Â performs a cheerful pieceÂ by Thomas Weelkes.


A sequence is a piece of sacred Latin chant often associated with a particular season like Advent, Christmas, and Easter, or for celebrations of Saint's days.

Nidaros, the site of a famous cathedral in Norway, had an extensive repertoire of sequences. One of them was for the occasion of St. Nicholas' feast day on December 6th.Â St. Nick's reputation for generosity, gifts, and good deeds, became the model for the very, merry holiday personality of Santa Claus.

TheÂ Congaudentes for St. Nicholas, is an example of a sequence that spread all over medieval Europe.

Heinrich Ignaz von Biber's collection of sonatas on the mysteries of the rosary each depict moments in the lives of Jesus and the Virgin Mary.Â The Nativity sonata, written in b minor, is surprisingly out of character, lacking the brightness and cheer that we have come to associate with the Christmas season.

In recording this sonata, violinist Julia Wedman describes being struck by its darkness. But the hardships that Mary and Joseph endured put the music in context. Imagining their pilgrimage to Bethlehem, Wedman wondered how Mary's feet must have felt, trudging mile after mile carrying a full-term baby, and points out that that delivering a baby in a dark and dirty stable must have been both terrifying and exhausting.

Sacred Motets for Advent and Christmas

17th century composer Heinrich SchÃ¼tz, was a game-changer in terms of musical style and development in Germany.Â SchÃ¼tz studied with both Gabrielli and Monteverdi in Italy, bringing back with him to Germany Italian musical ideas and devices that emphasized drama and declamation.Â The Italian influence is apparent in his sacred motets, like those he composed for Advent and Christmas.

Our featured release is a recording of medieval English carols from the Trinity Carol Roll.Â A roll is a type of manuscript, which, as you might expect, is rolled up like a scroll rather than bound like a book.Â This characteristic meant that rolls could be more easily and cheaply produced, but it also made them less durable. It is unusual then that the Trinity Carol Roll, which is over 6 feet long when unfurled, remained in such good condition!

Many 15th century manuscripts preserve only texts, sometimes with a mention of certain familiar tunes. But the Trinity Carol Roll includes both texts and distinct musical settings of polyphonic pieces, with part writing for two or three independent voices.Â While 15th century carols could be associated with many different kinds of festivals and celebrations, many pieces in the Trinity Carol Roll are on the topic of the Christmas season.Â They are performed by the ensembleÂ AlamireÂ in a southern-influenced dialect of 15th century Middle English.

Time capsule for this episode: 1250