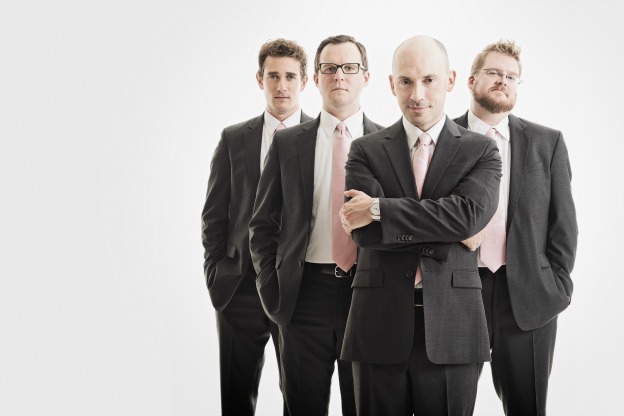 Guillaume de Machaut was a masterful composer of the 14th-century Ars Nova in France and is particularly associated with development of the polyphonic motet and secular song. Many of his compositions are in the so-called formes fixes including the rondeau, virelai and ballade.

Machaut's Ma fin est mon commencement is one of his most famous rondeaus and is cleverly set so that the text and music form a sort of palindrome. The tenor refrain of the text reads, "my end is my beginning, and my beginning my end," while the accompanying music is composed so that it is the same whether read forwards or backwards.

We'll hear the Orlando Consort perform this Machaut masterpiece, and then, the ensemble New York Polyphony sings their take on it in a newly composed piece by Jackson Hill.

The musical fragment of Bach's Fantasy for Organ in C major was likely composed in 1722 or 1723, and only the first 12 measures of the piece still exist. It's hard to know for sure if the remainder has been lost or if Bach just abandoned the composition.Â Either way, composer Thomas Meyer-Fiebig completed his own version of the fantasy, basing his composition on other comparable organ works by Bach. We'll hear Aya Yoshida performing Thomas Meyer-Fiebig's completion of a fragment by J.S. Bach-Fantasy in C Major, BWV 573 on the Jehmlich organ at the Evangelische Kreuzkirche in Dresden.

A 2012 recording by ensemble Accordone showcases music that relates to the city of Naples-some of it is early music, and some not.

18th-century Neapolitan composer Gaetano Latilla represents one of the "early music" composers on the disc. During the course of his career, Latilla was in demand in Italy, mostly as a composer of comic opera.

Similarly, 21st-century composer Guido Morini composed an opera of his own, to be performed on period instruments. This modern-day work is based on the figure of Raimondo di Sangro-an 18th-century alchemist, inventor and prince who lived and worked in Naples.

Our featured release is a 2013 recording by Camerata Trajectina and the Brisk Recorder Quartet Amsterdam. It's a CD called Sweelinck and the Art of Variation.

Some popular variations composed by Sweelink use the melody of a famous German song Mein junges Leben hat ein End. And, closely related to that German tune is a brand new piece written in 2012 by the Dutch composer Daan Manneke, which was commissioned by the Brisk Recorder Quartet. Titled Ã‰pitaphe-Double, the composer describes his Â piece as "an evocation of the renaissance as well as an homage to our great Dutch Master Swelin (i.e. Sweelink), the Phoenix of Music."