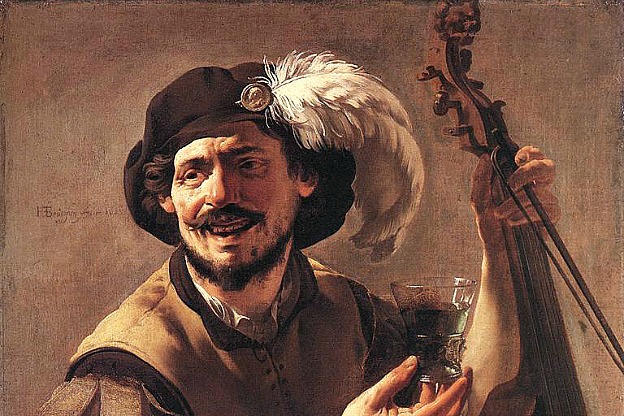 This hour, we'll spend time with composers who played and loved to write for the bass instruments-those you can't fit in the overhead compartment of an airplane! We'll also explore music written for three violins rather than two, and on our featured recording we'll hear chant from a 14th-century manuscript called the Thomas Gradual.

That was music from a manuscript called the Thomas Gradual performed by the ensemble Amarcord. We'll hear more from this recording later in the hour.

A "bass" kind of love

Every musician thrills, at least a little, to the sound of his or her own instrument. Violinists love the sound of the violin; harpists enjoy the multiple sound colors of the harp. Composers are no exception: the history of music is full of flutists crafting new tunes for the flute, or pianists composing piano music.

It's especially easy to love a melody: that high, sweet voice that carries the tune.Â But a few composers aim lower, writing solo and chamber works for instruments that spend most of their time in the depths.

This hour on Harmonia, we'll explore some early composers who wrote music for bass instruments.

Let's start with the sackbut! The instrument with the hilarious name is a relative of the modern trombone. It was often used to carry the baseline in sacred music and secular fanfares during the Renaissance and early baroque eras. But some composers, particularly those with an affinity for brass, wrote wonderful chamber works for sackbut.

Dario Castello, who may have been a brass player himself, wrote sonatas that could be performed by a variety of instruments, and the combination of cornetto and sackbut on solo lines would not have been unusual.

Bartolome de Selma y Salaverde came to Innsbruck from Spain in 1628 to enter the service of the Archduke Leopold as a virtuoso bassoonist.

Let's listen to a composition for dulcian (an early basooon-like instrument) by Salaverde, who wrote what are probably the first solo works for his instrument. Salaverde's works, filled with difficult, wide-ranging passagework, still challenge today's players.

The cello was still a relatively new instrument in the 1600s when the Italian virtuoso Domenico Gabrielli began composing some of the first solo works for his preferred instrument. The difficulty of Gabrielli's compositions, including double, triple, and even quadruple stops, suggests he was a master player.

We'll hear two pieces by Gabrielli for cello, a solo ricercar in C followed by a short canon for two cellos. The cellists Richard Tunnicliffe and Sabastian Comberti stand in for the composer.

The cello may have been making inroads in Italy, but in England in the 1600s, the bass viol was still king. The composer and viol player Christopher Simpson celebrated his chosen instrument by publishing The Division Viol, a popular viol tutor including instructions on how to make variations, or divisions, on popular tunes.

Let's start with a piece in which two bass viols partner one another in a gigue from Marais's Concerto No. 59. Then we'll hear something stranger, a present-day arrangement of two musette by Marais performed by the Australian group The Marais Project.

We began this hour with music for a lower range. Now, let's move on to something higher.

Like turtledoves and socks, violins travel in pairs. In orchestras, there are first violins and second violins. In chamber music, there are trio sonatas of two high instruments, often violins, playing together over a baseline. But what happens when a third violin gets in on the action?

In 1661, London found out when King Charles II brought German violinist Thomas Baltzar to court for the then-exorbitant annual salary of 110 pounds. Baltzar made a splash in England: after hearing the German perform, diarist John Evelyn wrote: "I stand to this houre amaz'd that God should give so greate perfection to so young a person."

But at court, Baltzar was the extra man. He joined the elite group of musicians called The King's Private Musick, which already contained two fine violinists.

Fortunately, a handful of composers rose to the challenge, writing pieces for not two, but three violins. We'll hear some of these rare three-violin pieces, but first, let's listen to one of Baltzar's catchiest compositions, divisions on the popular tune "John Come Kiss Me Now."

Inspired by his new employment, Baltzar also wrote a ten movement Suite for Three Violins that inspired other composers to get in on the fun.

One of these was the Italian immigrant and violin virtuoso Nicola Matteis. Diarist Roger North wrote of Matteis that "his pride and arrogance was incomparable."Â Nevertheless, Matteis took England by storm. "He had a stroak so sweete," wrote John Evelyn, "and made it speake like the Voice of a man"; Matteis's Divisions in D Minor, written for three violins and bass, is as fiery as its creator.

Our featured release contains two fourteenth-centuryÂ massesÂ that have recently been recorded by the ensembleÂ Amarcord. The music on this recording comes from a manuscript known as theÂ Thomas Gradual-a valuable source of German medieval liturgical music.

We'll hear some music from a mass named for the Leipzig Thomaskirche's patron saint. The Apostle mass for St. Thomas would have been a high point of celebration each year for the local parish.

This particular Leipzig church has a long musical tradition: its boys choir was founded in 1212 and is still going strong! In fact, Amarcord-itself founded in 1992-is made up of former members of the St. Thomas Boys Choir and thus connected to its music by a long lineage.Â Let's hear them perform again.