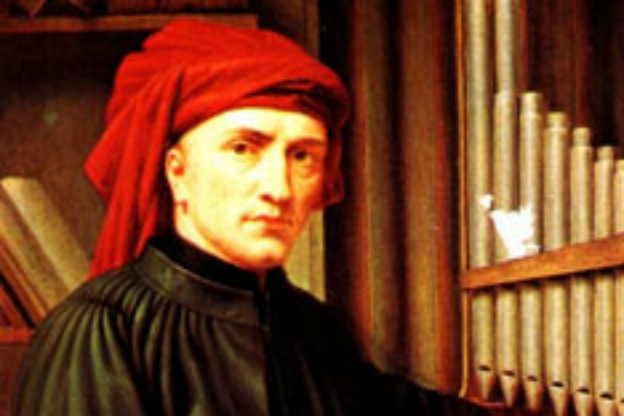 What's your biggest regret? What if you had a thousand? The wrongs that we fail to right, the tragedies we can't escape-regret is a powerful emotion, just as it was in the 1400s when the Franco-Flemish composer Josquin des Prez set a text about a thousand regrets to music. Josquin's anguished tune "Mille Regretz" swept through Europe like a fever, and we'll hear a multitude of settings, both plain to wild.

Here's music by 16th-century composer Josquin des Prez, a lament, Absalon, fili mi, performed by the Oxford Camerata. The text expresses the deep regret of King David upon the killing of his rebellious son: "Absalon my son/if only I had died instead of you, Absalon/I shall live no more, but go down to hell, weeping."

Most of us have one or two regrets in life. But a thousand?Â A thousand seems extravagant-but then, love can often breed regret, as the medieval composer Josquin des Prez captured in one of the most beloved songs of the last millennium: Mille Regretz!

A thousand regrets at deserting you

and leaving behind your loving face,

I feel so much sadness and such painful distress,

that it seems to me my days will soon dwindle away.

Josquin was famous throughout much of Europe, and his chanson, for four voices, became an instant classic, making its way across hundreds of miles and multiple centuries. Listeners have found Josquin's tune irresistible-and so have composers, who've turned and twisted and remade the work into music for chorus, vihuela, and even string quartet!

But let's start with the original: "Mille Regretz," a four-part chanson by Josquin des Prez.

For many composers, the temptation to meddle with Josquin's tune was irresistible. Even composers who didn't compose much rose to the challenge. Tielman Susato ran a successful music publishing business in the low countries. He was also an arranger and sometime composer, and he published a "response" â€“ a kind of musical answer to Josquin's multitude of regrets â€“ called "les miens aussi brief verras decliner." It's a gloss on the last line of Josquin's song. In the response, Susato begins by quoting Josquin's music verbatim, then glides away into music of his own.

Another composer who couldn't keep his ears off Josquin's tune was Nicolas Gombert.Â Gombert was a priest, an abusive choirmaster, and a devoted pupil of Josquin's-he even wrote a musical commemoration of Josquin's death. He also wrote a dense, six-voice meditation on his teacher's famous tune.

Hermann Finck, a theorist living in the 1500s, called Gombert's music "altogether different from what went before," stacked with "full harmonies and imitative counterpoint." Gombert's version of regretting is denser and more interwoven than his teacher's.

Today's tastemakers might be bloggers or radio DJs. But in the 1500s, there was no substitute for the favor of an Emperor. Charles the Fifth, Holy Roman Emperor, ruled the low countries, parts of Italy, and the Americas. He also became king of Spain, where he was called Carlos the First.

But even an emperor can have regrets: Charles, born in the low countries, felt out of place in Spain where he spent much of his time and never spoke Spanish with fluency. And Charles loved Josquin's sorrowful chanson. "Mille Regretz" became one of Charles's favorite tunes-and an emperor's favor is a powerful thing.

Spanish composer Luis de Narvaez knew this. Narvaez was a choirmaster and vihuela expert attached to Charles's court in Spain. The vihuela was a guitar-shaped instrument with six sets of doubled gut strings. It was popular in Charles's time but fell out of favor later in the century. De Narvaez wrote one of the few collections of vihuela music that survives, Dos Seys Libros del Delphin.

His version of "Mille Regretz" is written in notation called intabulation and frosted with ornaments. De Narvaez called his piece "La cancion del Emperador," the song of the Emperor.Â (For what more potent endorsement can you have?)

We're all about regrets this week on Harmonia-"Mille Regretz," or a thousand regrets, in the words of one of this millennium's most indelible tunes.

Like any good earworm, "Mille Regretz" snaked its way to unexpected places. Not least, into church! CristÃ³bal de Morales, a Spaniard, left Spain for a plum job singing at the papal court at the Vatican. The pope was partial to Spanish singers, and Morales, though famously grumpy, was a gifted composer and musician. He also had his eyes on the prize.

The story goes that when Morales discovered that the Emperor was to visit Italy, he worked the "Mille Regretz" tune into a mass using a technique called parody, in which the tune is audible in each and every movement of the mass. It was a clear-and lovely-bid for the emperor's favor.

We still have regrets in the 21st century-and maybe that's why Josquin's tune still has life in it. The composer David Dzubay was born in 1964, many centuries after Josquin wrote his final notes. But Dzubay, too, was inspired by the tune, working it into his Threnody for string quartet, composed in 1987.

"Josquin's chanson provides the frameworkâ€¦Around this frame, I have created my own musical statement using interruption, layering, contrast, repetition and variation."

Let's hear that repetition and variation in a recording by the ensemble Voices of Change.

Mudarra's collection was published on December 7th, 1546, after the composer had taken up a permanent post as canon at the cathedral of Seville, and contains songs, tientos, and dances showcasing the capabilities of the then-popular vihuela. (The collection also contains the earliest surviving repertoire for the four-course guitar.)

Hopkinson Smith performs music of Alonso Mudarra on his recording Mudarra: Three books of Music in Tablature for vihuela, originally released in 1992; it's now available digitally on the naÃ¯ve classique label.

The writers for this edition of Harmonia are Anne Timberlake and Laura Osterlund.