Welcome to Harmonia…I’m Angela Mariani. When the Spanish came to Mexico, they encountered an Aztec empire with a rich musical culture. In the three centuries of colonial rule that followed, Mexico City artists gained fame for their musicianship in and beyond the walls of the city’s cathedral. We’ll hear music from some of these famed musicians. Plus . . . vocal ensembles Calmus and amarcord team up for our featured release Leipziger Disputation.

[Just a quick note before we begin . . . I’m recording this in March of 2020, during the historic global pandemic, which means that I’m recording this voice track at my house—and you may well hear some musical contributions by the many feathered friends in my yard.]

Manuel Zumaya was a child prodigy. At the age of twelve, he lost his father, which in turn put in question his future as a professional musician. But, the Cathedral in Mexico City, where the young Zumaya was training, saved the day and decided to foot the bill. Zumaya would go on to work in two of 18th-century New Spain’s most important cathedrals. This is music from Zumaya’s Cantata to Saint Peter, written for the Cathedral in Oaxaca.

While growing up in Mexico City, Zumaya was able to train with some of the best musicians in the New World. His composition teacher was music director at Mexico City Cathedral Antonio de Salazar. Salazar had a few hard knocks as well—apparently, when he first applied to play dulcian as a chapel musician at Mexico City Cathedral, he was turned down. After a few years working in Puebla, Salazar returned to Mexico City for a composition competition, which he won in a landslide, receiving four times as many votes as the second-place finisher.  This is his “Salve regina” setting, a hymn to the Virgin Mary.

By the mid-eighteenth century, Italian-born Ignacio Jerusalem was composing for Mexico City Cathedral. The Cathedral was at first hesitant to hire Jerusalem—his modern compositional style was a radical change for musically conservative Mexico City. But despite the cathedral’s lukewarm attitude towards the Italian composer, Jerusalem led the charge in modernizing choir texts—both music and words—and he doubled the size of the capilla—the chapel’s orchestra. We’ll hear an excerpt of his setting of Psalm 50, “Miserere mei, Deus.”

You can hear highlights from recent and archival concert recordings of early music on Harmonia Uncut, our biweekly podcast, curated and hosted by Wendy Gillespie. Listen online at harmonia early music dot org and through iTunes.

As early as 1600, cities at the core of New Spain—like Mexico City, Puebla, and Oaxaca—had music scenes that rivaled Seville. This is a reflection of the fact that these locations already had formidable musical traditions that preceded the arrival of Europeans in the Western Hemisphere. Aztec musicians sang hours of music from memory; and, in a more grim example, drummers who missed a rhythm during a ceremony were executed.

Sixteenth-century Spanish composer Hernando Franco moved to Mexico City mid-career, part of an expanding enterprise that included the building of a new cathedral there. Franco raised the salaries of instrumentalists and singers at the cathedral and took care of the music archives. But, he was far from perfect—the church spent considerable funds paying off his gambling debt. What’s more, the church wasn’t able to sustain these high salaries for long. Franco quit and his musicians refused to perform for a time. Here’s a piece by Franco in the indigenous language of náhuatl: “Dios itlaço nantzine.

We turn now from the New World to the Old, with music in the time of Martin Luther and the Leipzig Disputation. This theological debate at the university led to a final break with Catholicism for northern Germany. One way the Reformation theologists supported their arguments was through music. A Mass for twelve musicians was performed, and it was so astonishing that Leipzig’s musical reputation grew beyond the walls of the city for the first time. It is possible that this was the Mass “Et ecce terrae motus” by Antoine Brumel. Here are the Kyrie and Agnus Dei.

The Kyrie and Agnus Dei from the “Et ecce terrae motus” Mass by Antoine Brumel. That was the Calmus Ensemble and amarcord, from their 2019 recording, Leipziger Disputation.

Our featured release stars Calmus ensemble and amarcord, both founded in the ‘90s. Leipzig-based ensemble Calmus enjoys performing and teaching throughout Europe and North and South America. Ensemble amarcord manages the International Festival of Vocal Music “a capella” in Germany. We’ll close with a piece by one of Brummel’s successor’s in Ferrara: Cipriano de Rore. 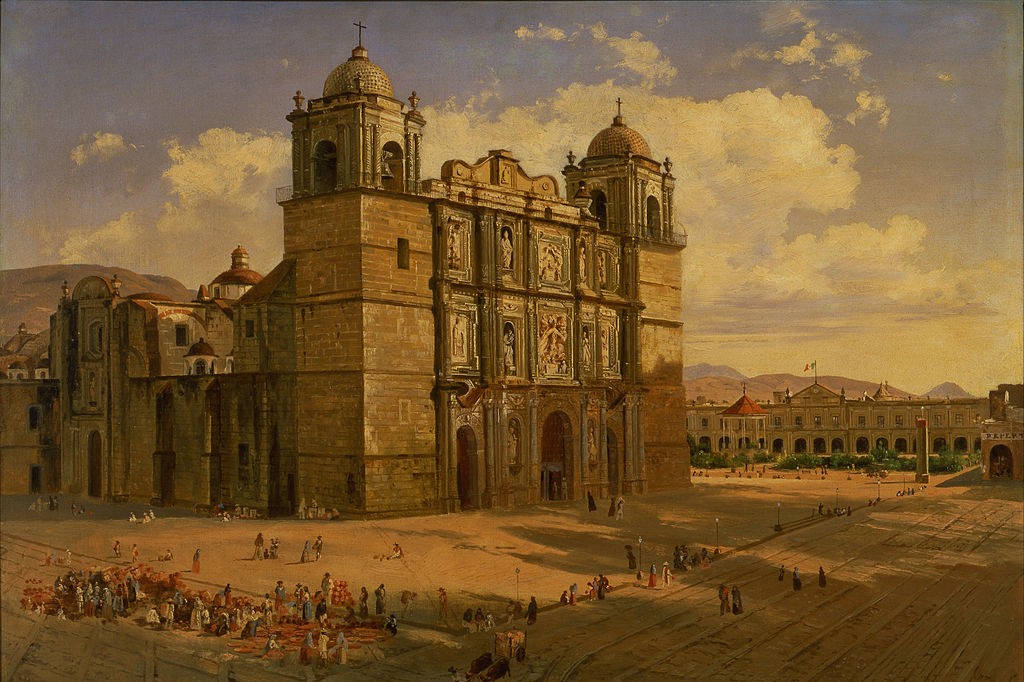 When the Spanish came to Mexico, they encountered an Aztec empire with a rich musical culture. In the three centuries of colonial rule that followed, Mexico City artists gained fame for their musicianship in and beyond the walls of the city’s cathedral. This week on Harmonia, we’ll hear music from some of these famed musicians. Plus, vocal ensembles Calmus and amarcord team up for our featured release Leipziger Disputation.