How does a ship’s trumpeter end up leading the Piffari del Doge? Zorzi Trombetta and his sons were the heart of Venice’s most prestigious wind band at the end of the fifteenth century. But Zorzi spent his early life aboard mercantile galleys in the Mediterranean and beyond. The sea has always been a musical space, though one that is easy to overlook compared to those on dry land. This hour, we’ll explore the impact of maritime culture on music from the fifteenth through eighteenth centuries.

Zorzi Trombetta da Modon was a ship’s trumpeter and professional wind player who lived from about 1420 to 1500. He spent his early career on mercantile galleys with trade routes between the Low Countries and the Middle East. Details of Zorzi’s life are found in a personal notebook, mainly devoted to shipbuilding and seafaring with a few folios of notated music dating to the 1440s; it’s a unique artifact from a time when professional instrumentalists rarely read music.

Long before the advent of marine radio, ship’s trumpeters were tasked with hailing other ships and port officials. Also used by military trumpeters, heralds, and civic watchmen, fanfares were an effective way to communicate over distances that voices could not carry. Like Zorzi, ship’s trumpeters often cultivated musical skills beyond signaling. In this live recording, we’ll hear a trumpet fanfare followed by a counterpoint from Zorzi’s notebook, adapted for four-part wind band with an additional tenor.

An excerpt from the notebook of ship’s trumpeter Zorzi Trombetta, adapted by Raffaella Bortolini, and performed by Ensemble Seraphim.

Two items copied in the notebook are attributable to composers already well known in Zorzi’s lifetime: Guillaume de Machaut and John Dunstable. These were likely intended for use as models in his study of notated composition. Let’s hear the Dunstable chanson that Zorzi collected, “Puisque m'amour m'a pris en déplaisir.”

Zorzi had settled in Venice by around 1480 when he began serving in the Doge’s personal wind band, the Piffari del Doge. In addition to providing music for ducal processions, banquets, and services at San Marco, the players freelanced at ceremonies held by the city’s many Scuole Grandi and parish churches.

[A flexible combination of shawms, bombard, and trombones, the ensemble expanded to 6 members in the 1490s with Zorzi’s trombonist sons Alvise and Jeronimo. We’ll hear a similar band play a chanson by Jean Japart, a French (Franco-Flemish) composer active in Italy around the same time as Zorzi.]

“Ave maris stella” (Hail, star of the sea) is a Marian hymn that appears in manuscript as early as the 10th century. The idea of the Virgin Mary as “Stella Maris,” the guiding star of the sea, became a popular devotion for seafarers and travelers and is a namesake of coastal churches to this day.

Ensemble Unicorn with the first verse of “Ave maris stella” followed by its keyboard intabulation in the Codex Faenza. Marian hymns like “Ave maris stella” were often used as the basis for larger works, and as a popular Vespers hymn, it also features in Claudio Monteverdi’s Vespers of 1610.

Pausing briefly in the early seventeenth century, we can look to another cultural artifact from the waters around Venice, the barcarolle— [traditional songs sung by gondoliers, OR with a rhythm reminiscent of the gondolier's stroke]. Adriano Banchieri’s barcaruolo in his madrigal comedy Barca di Venetia per Padova parodies both boatman and passenger.

Welcome back. We’re exploring maritime music this hour on Harmonia.

Grand Tourists of the eighteenth and nineteenth century influenced the prevailing concept of the barcarolle as a sentimental song attuned to the rhythmic stroke of the gondolier, usually in 6/8 meter. The Venetian dialect canzoni da battello that they heard, however, were often bawdier than those that appeared in parlor songbooks. “Co' Checca, Betta e Cate,” tells of the boatman’s adventures with three women.

We even run into instruments with nautical names. With a single string and body length of up to 7 feet, the tromba marina definitely ranks among the strangest of early bowed strings. Also known as trumpet marine or “nun’s fiddle,” this instrument was particularly popular in fifteenth-century England and seventeenth- and eighteenth-century Germany. Its name may refer to the long, conical shape of its wooden body as well as the association of the trumpet with marine signaling. Women musicians such as nuns who weren’t permitted to play brass instruments could substitute tromba marina when sacred compositions called for trumpet. A small amount of music written specifically for tromba marina showcases its unusual character. In Wolfgang Iten’s Pastorella whose title translates roughly to “Pastorella, or Latin Nativity song”, a tromba marina duet heralds the birth of Christ in alternation with shepherdess narrators.

When we think about maritime music, the first thing to come to mind might be rustic tunes sung by drunken sailors of yore. Sea shanties even had their moment on TikTok in 2021*.

[*start clip (drumming) under this sentence, play first verse, then fade the chorus under the following paragraph…]

Scottish postman Nathan Evans launched a music career after his rendition of “The Wellerman” went viral, with thousands of users adding their voices to digital duets and choruses. Here’s a clip:

TikTok user Nathan Evans singing “The Wellerman,” the tune that sparked a social media trend dubbed “ShantyTok.” That particular tune is a whaling ballad from New Zealand rather than a true shanty, but the term has become a catchall for songs of the sea.

A shanty or “chantey” specifically is a work song in which a leader sings a line in alternation with the rest of the crew. They were influenced by the work songs of enslaved Africans but used primarily by Anglo-Irish sailors. The call-and-response patterns helped regulate the rhythm of group tasks aboard ship. We’ll hear a revolutionary-war era chantey called “Sam’s Gone Away.”

That was (a Folkways recording of) the chantey “Sam’s Gone Away” sung by Cliff Halsam and John Millar at Mystic Seaport in 1976.

Hearing traces of the sea across genres and centuries reminds us of the ubiquity of maritime culture in the early modern era. Seafaring was a way of life and backbone of economies—and ships, the vectors of cultural exchange and colonialism that shaped the world of today. William Billings’ anthem “Euroclydon,” published in his tune-book Psalm Singer’s Amusement in Boston in 1781, is dedicated to the tribulations of those who, like Zorzi Trombetta three centuries prior, [quote] “occupy their bus’ness in great waters.”

While the majority of tracks on this recording are texted, La Morra’s instrumental ensemble includes clavicembalum, organetto, recorder, plectrum lute, and fiddle. The following untexted Balatum by Radomski survives in manuscript at the Biblioteka Narodowa [neh-rah-doh-vuh] in Warsaw.

A Balatum by Mikołaj [mee-ko-why] Radomski performed on organetto, fiddle, and plectrum lute by [the group] La Morra.

The Jagellonian University in Cracow was established in 1364, and many of the musical sources that survive from this period are associated with clerics who were enrolled or taught at the university. The final track we’ll sample from Mirabilia Musica gives us a glimpse into fifteenth-century “spring break.” In Breve regnum erigitur (“A brief reign is established”) the students elect a king to preside over their carnival. The final verse reads: “For the election of a king becomes the neglect of study, and reading is abandoned the whole week.”

The writer for this edition of Harmonia was Chelsey Belt. 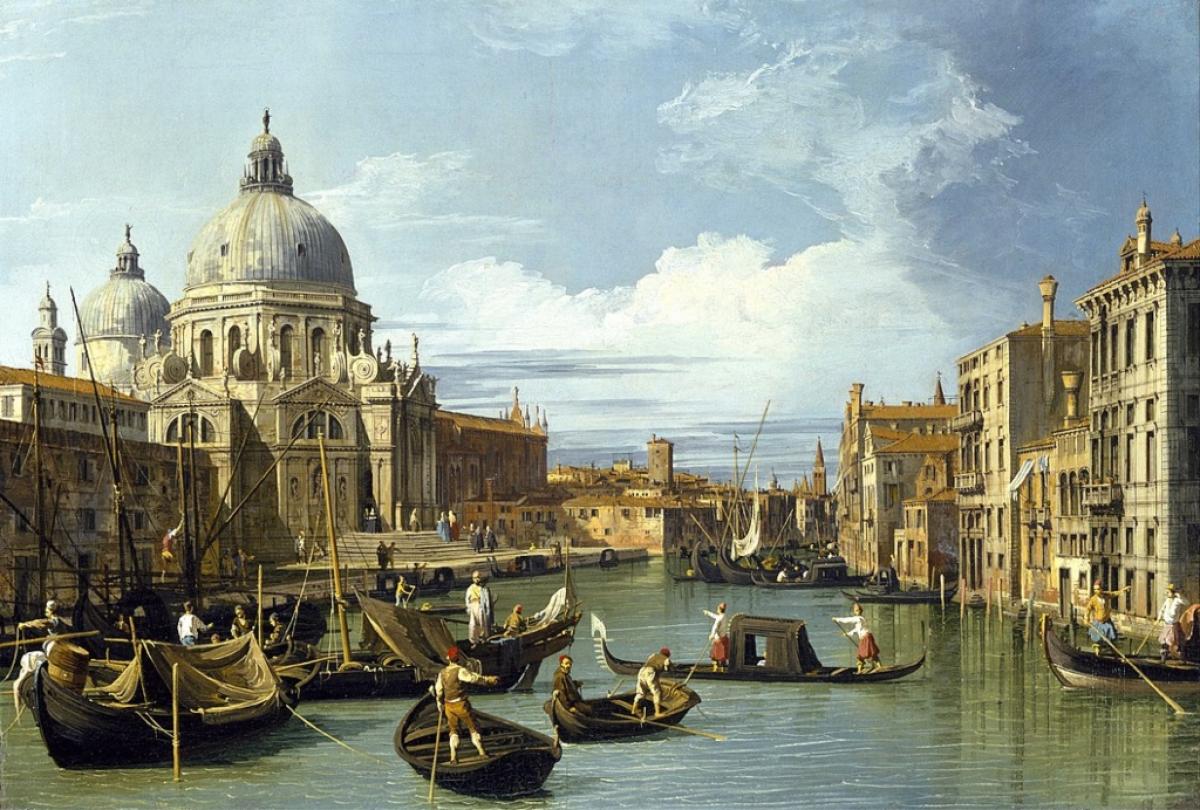 How does a ship’s trumpeter end up leading the Piffari del Doge? Zorzi Trombetta and his sons were the heart of Venice’s most prestigious wind band at the end of the fifteenth century. But Zorzi spent his early life aboard mercantile galleys in the Mediterranean and beyond. The sea has always been a musical space, though one that is easy to overlook compared to those on dry land. This hour, we’ll explore the impact of maritime culture on music from the fifteenth through eighteenth centuries.