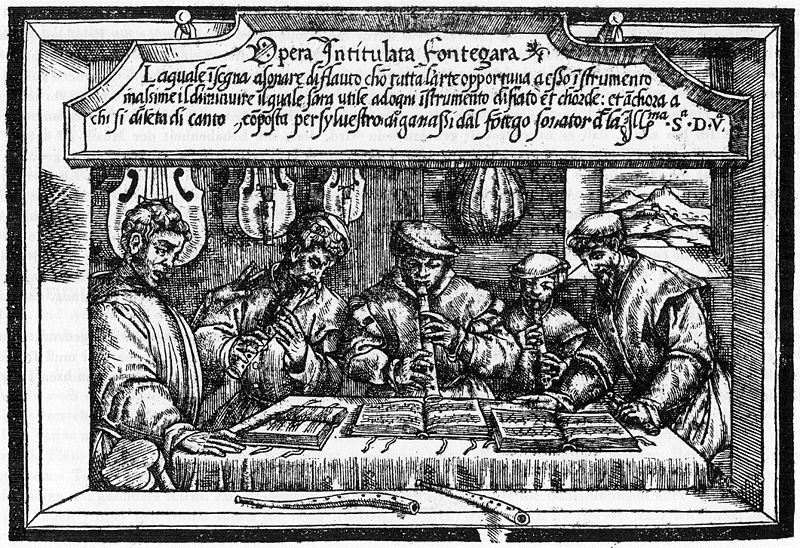 The Ganassi Family: barbers and "sonadors"

Sylvestro Ganassi was born in Venice in 1492 to a family of many talents. His father was a barber whose shop was in the Rialto quarter near the bustling Fontego market and warehouse district.  If the mention of a barbershop has you thinking of the last time you popped in to the salon for a quick cut and color, think again. In addition to giving a shave, Barbers wielded their razors in minor operations like tooth extractions and bloodletting.

That aside, Barbershops have long served as community centers where men, especially, would gather. And, by Venetian law, barbers were also permitted to work as sonador or ‘players of instruments.’ In fact, the place where sonadors could receive their training, the Scuola dei Sonador was in the same quarter of the city as Papa Ganassi’s barbershop near the Fontego.  You can see how the Ganassi family of sonadors residing near the Fontego thus became known as ‘I sonadori del Fontego.’

Sylvestro’s brother, Giovanni, seems to have carried on the family business, being described in historical documents as a barber-sonador.  Sylvestro though seems to have moved beyond “Barber’s” music when he landed a high-ranking appointment as sonador to the Doge, in 1517. For ceremonial and public outdoor events, Sylvestro played the piffero, an oboe-shawm-like instrument. While in the palace, he played the viol and recorder.

Although it’s filled with lots of formulas, Ganassi doesn’t include any examples of actual pieces in La Fontegara to which players should apply his instructions. The question then is, what music did Ganassi have in mind when he published his treatise in 1535? Frottole were hot items at the beginning of the 16th century.  Petrucci published eleven volumes of them in Venice between 1504 and 1514. When frottole began to lose fashion, the new Madrigal developed close on its heels.  The first volume of madrigals to bear the actual title “madrigal” was the Libro primo della Serena of 1530. Soon after in 1533, Philippe Verdelot published his book of madrigals.

Ganassi diminutions can totally change a piece, making a simple melody florid and individual, riffing on a tune like jazz musicians today do. The result is a printed score that looks totally different on the page than its actual realization by a performer. The instruments, especially the recorder, add the most ornaments, but Coutouly joins in on the fun adding elaborate Ganassi divisions in her vocal part as well, most notably in the piece, In me cresce l'adore.  As the historical flute player Barthold Kuijken writes, “the notation is not the music.” So, it is a pleasure to hear the ensemble, Doulce Memoire fill in the gap, experiment with Verdelot and Ganassi, and offer one performance possibility for this 16th century music.