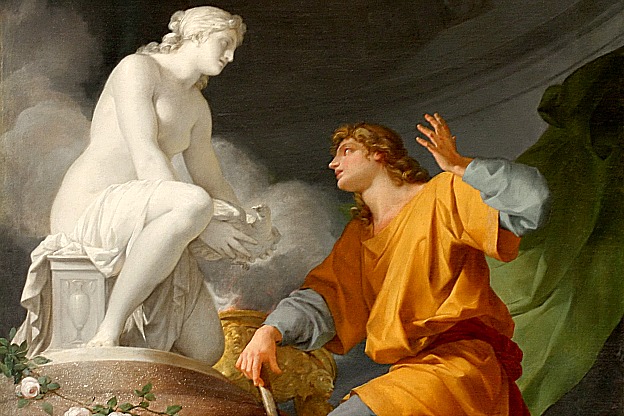 It’s “a many splendored thing.”

This hour, we’ll hear music that explores this complex and multifaceted human emotion.

Let’s begin with English composer Henry Purcell, who said, “Love, thou art best of Human Joys…Ah, how sweet it is to love!”

Parting is such sweet sorrow

Yes, love is sweet, but oh, when lovers must part!

This song by the Renaissance Swiss composer Ludwig Senfl tells of a man who must take leave of his lover.  He begs her not to forget him, and to keep his spirit close during his absence. After Senfl, we’ll hear a medieval Galician cantiga that repeats the cries of a lover left alone in the city of Vigo.

In the 1681 issue of the periodical Mercure Galant, Marc-Antoine Charpentier’s setting of a poem by Pierre Corneille tells the story of a very miserable man by the name of Rodrigue who comes face to face with a no-win situation. Here’s his dilemma: Rodrigue is in love with Chimène, but any chance of them being together falls to pieces when Chimène's father insults Rodrigue's father. Rodrigue feels a duty to avenge his father but if he does, he’ll lose Chimène’s love!  See?  He just can’t win. Father, Mistress, Honour, Love-Rodrigue is torn.

Rodrigue was stuck in a difficult situation. Here’s another case of love being caught between a rock and a hard place…quite literally!  If you remember your Greek mythology, the story of Pigmalion might be familiar: the sculptor falls in love with his stone statue instead of his girlfriend!  Jean-Philippe Rameau set the story to music in an opera first performed in 1748.  It was so incredibly popular that composer Claude Balbastres adapted the overture from Rameau’s opera for solo harpsichord.

Love is patient, love is kind, love is sweet, love is complicated, but would you ever say that love is like tobacco? Or is it the other way around? Here’s Tobias Hume, proving the point, in an Ayre from 1605, which includes the lyrics:

Here’s another funny story about love. After spending a scandalous night with her lover, a nun, who is in a hurry to make it to morning services, jumps out of bed, and instead of putting on her habit, she accidentally wears her lover’s underwear on her head, much to the amusement of her sisters!

Sometimes, love can drive you crazy…especially unrequited love. In fact, there’s a whole genre from Restoration England of so-called Mad songs that express love’s erratic and crazy delusions. Here’s a mad song by John Eccles, in which Marcella, a beautiful shepherdess from Cordova realizes that her lover, Ambrosio, is only leading her on.  Poor Marcella subsequently goes insane.

What a relief it is when love finally works!  Here’s some party music from the recording The Triumph of Love, in which the lovers Cloris and Rosie are finally married, and the guests celebrate…with a little too much wine!

Many of the sources for modhinas are anonymous found in scattered manuscripts, but some of these sensuous and soulful songs were preserved in the Jornal de Modinhas that was published twice a month for four and a half (4 ½)  years between 1792-1796.

In addition to the popular vocal modhinas, the recording has instrumental music by other celebrated 18th-century Portuguese composers, (including Antonio da Silva Leite and Pedro Antonio Avondano).