Welcome to Harmonia . . . I'm Angela Mariani. The Cleveland-based baroque orchestra Apollo’s Fire was created in 1992 by a woman with a vision. Jeannette Sorrell envisioned an ensemble dedicated to the baroque ideal that music should evoke the passions in the listeners, and she felt strongly that the instruments for which the music was composed best evoked those passions. So began thirty years of exploring the baroque canon afresh, as well as veering off the beaten path to lesser-known repertory of the period; moving forward to Mozart from an earlier perspective than the usual orchestral one; going backin time to medieval music; and moving sideways into the traditional music world, both religious and secular. This hour, we’ll celebrate their many accomplishments, and we’ll sample their 2022 recording O Jerusalem!

The four dances are drawn from Terpsichore, a volume of more than 300 instrumental pieces published in 1612 and named after the muse of dance. // In the introduction to Terpsichore, Michael Praetorius takes credit for arranging the music rather than composing it, and he leaves instrumentation, tempo, and ornamentation up to the player or director. // So, for example, in case of this performance by Apollo’s Fire, orchestration and tempo decisions were in the hands of founder and artistic director Jeannette Sorrell.

Harmonia is in the midst of our 30th season, but we’re not the only ones. This hour, we’re celebrating the 30th anniversary of the Cleveland-based baroque orchestra Apollo’s Fire, named for the classical god of music and the sun. In 1992, award-winning harpsichordist and conductor Jeannette Sorrell founded Apollo’s Fire, envisioning an ensemble dedicated to the baroque ideal that music should evoke the passions in listeners. Thirty years, 27 CDs (many of which reached the top ten of Billboard’s Classical Charts), and a Grammy award later, Apollo’s Fire remains under the artistic direction of its founder, who’s still passionately dedicated to evoking our passions.

A survey of Apollo’s Fire’s discography shows their work beginning, predictably enough for 1992, with a recording of Messiah. And indeed, as the name “Apollo’s Fire, The Cleveland Baroque Orchestra” implies, well over a dozen of their recordings over the years have been of familiar repertory: Bach’s Brandenburg Concerti and St. John Passion, Vivaldi’s Four Seasons, and other well-known baroque standards.

In 1998 the ensemble recorded the piece without which there might not be a single cornetto player left on the planet, the Monteverdi Vespers of 1610. (A Harmonia footnote: we have it on good authority that Paul McCartney was struck by this music—anybody remember the trumpet in Penny Lane?)

From the young Apollo’s Fire’s 1999 recording of the Monteverdi Vespers of 1610, which was re-released in 2010 by Avie as the 400th Anniversary edition of that renowned early baroque standard, and remains a signature piece for Apollo’s Fire.

A more recent offering from the canon is their 2021 recording of Vivaldi’s Four Seasons, in which Violin Magazine's Artist of the Month for October 2021, the Spanish violinist Francisco Fullana, is the soloist. Listen to the moody, atmospheric movement marked Adagio molto, of Autumn, Concerto No. 3 in F Major, RV 293.

Francisco Fullana is the violin soloist on Apollo’s Fire’s 2021 Avie recording of Vivaldi’s Four Seasons. Even when Apollo’s Fire is playing music you know, they can surprise you. Jeannette Sorrell’s intimate acquaintance with the Seasons inspired her arrangement of “Summer” for harpsichord solo instead of violin, which she performs on their 2020 Avie recording entitled Vivaldi and Friends.

We just heard Jeannette Sorrell play her own arrangement of the final movement of “Summer,” the second of Vivaldi’s Four Seasons, recorded for the 2020 Avie release Vivaldi and Friends.

The baroque ideal that music should evoke the passions need not apply only to baroque repertory. Jeannette Sorrell and Apollo’s Fire approached Mozart from the vantage point of Monteverdi and Bach,who came before, rather than looking back in time from Mahler and Bruckner, as the typical philharmonic orchestra might do. From this point of view, Mozart appears harmonically progressive, perhaps even shocking, reaching toward romanticism. And one of Jeanette Sorrell’s many strengths, as you just heard in the Four Seasons recording, is her ability to persuade well-known soloists to inspire her finely disciplined orchestra. With all that in mind, listen now to fortepianist John Gibbons play a movement from Mozart’s 20th Piano Concerto on a 2005 Apollo’s Fire recording.

Many members of Apollo’s Fire have been professionally involved with traditional music, in addition to their experience with baroque performance, making it possible for Jeannette Sorrell to explore byways of performance that others cannot. So…in addition to making standard baroque and classical repertory, especially music of Mozart, their own, Apollo’s Fire stepped outside the box as early as 1999, when the ensemble released on the Eclectra label Sweet was the Virgin’s Song: Noels and Carols from the Old World and Noël Ancien, stretching the idea of “Cleveland’s Baroque Orchestra” further than some found appropriate. Undaunted, Apollo’s Fire pursued its passions.  With the 2004 release of Scarborough Fayre: Traditional Tunes from The British Isles and The New World, the ensemble, thanks in part to the crossover talents of people like violinist David Greenberg (who has played both baroque violin and Cape Breton fiddle for many years), further explored the overlap of “traditional” and “early” music.

We heard the tune Tullochgorum from Apollo’s Fire’s recording Scarborough Fayre: Traditional Tunes from The British Isles and The New World. The ensemble’s ongoing and successful travels into the world of crossover music broadens their appeal (to many ears). Members of the ensemble like Greenberg and flutist Kathi Lynne Stewart have long contributed traditional music skills in addition to their baroque and classical chops.

Early music can mean a lot of things. What does it mean to you? Let us know your thoughts and ideas. Contact us at harmonia early music dot org, where you’ll also find playlists and an archive of past shows.You’re listening to Harmonia . . . I’m Angela Mariani.

Welcome back. Nestled between the hills of the Blue Ridge Mountains and the eastern Appalachians, just at the northern tip of the Shenandoah Valley in Virginia, lies beautiful Sugarloaf Mountain, near where Jeannette Sorrell spent her childhood--and found herself drawn, after a long absence, to the rich Irish- and Scottish-based musical traditions of that region. Apollo’s Fire has made two Sugarloaf CDs, the second cleverly targeting the Christmas market after the success of the first. Here’s a piece from that recording of “traditional” music [that might sound familiar to some Harmonia regulars].

The composer is listed as “traditional,” and the song entitled “Nowell sing we” from Apollo’s Fire’s 2018 Avie CD Christmas on Sugarloaf Mountain: an Irish-Appalachian celebration. This recording made it to the Billboard "Classical" charts. (When does an “anonymous” song become a “traditional” song? And when does a “traditional” song find itself double-billed as “classical music?”) Never mind -- Christmas and the New Year are excellent times for early music and traditional music alike…

Love is also an excellent marketing tool for music. The soprano Amanda Forsythe joined Apollo’s Fire on the recording of The Power of Love: arias from Handel operas. Here’s one of those arias, this one sung by Atalanta in Xerxes, in which she tells us that [quote] “A pretty little gesture, a charming little smile, a movement of the eye can make one fall in love. And I know how to do them all!”

Speaking of Love and Love Lost, Orpheus, whose entire myth is about the love lost, recovered, and lost again, is the subject of the CD that won a 2019 Grammy award for Best Classical Solo Vocal album for singer Karim Sulayman and Apollo’s Fire. We’ll hear Tarquinio Merulo’s Folle è ben.

The refrain says, “Let them say what they will, or what they know” - Orpheus is in love and that’s that! Karim Sulayman sang Tarquinio Merula’s Folle e ben with Apollo’s Fire on their 2018 Avie CD Songs of Orpheus.

Apollo’s Fire continues their journey outside the baroque box with 2016’s Sephardic journey: wanderings of the Spanish Jews, in which the Judeo-Spanish Ladino songs feature along with music of Salomone Rossi. Here, for example, is Jeannette Sorrell’s arrangement of the traditional Ladino melody with the words “The rose blooms in the month of May. My soul darkens, suffering with love.”

To wrap up this 30th anniversary celebration of Apollo’s Fire, we’ll move to the present and feature a track from Apollo’s Fire’s 2022 CD O Jerusalem! City of Three Faiths. Its program is organized as a walk through four neighborhoods of Jerusalem: the Christian, Jewish, Arabic, and Armenian quarters. Much of the program was recorded live in 2020, and as you’ll hear, Apollo’s Fire, the Cleveland baroque orchestra, has traveled a long way from Messiah in thirty years!

This is “Santa Maria Strela do Dia,” one of the most well-known of the Cantigas de Santa Maria, songs collected at the mulicultural court of King Alfonso el Sabio in 13th century Spain, a time when the Iberian peninsula was home to large Islamic, Jewish, and Christian communities.

That was the cantiga Sancta Maria strela do Dia. That’s from the recording, O Jerusalem! City of Three Faiths, issued in 2022 by Avie and performed by Apollo’s Fire, Jeannette Sorrell, director. 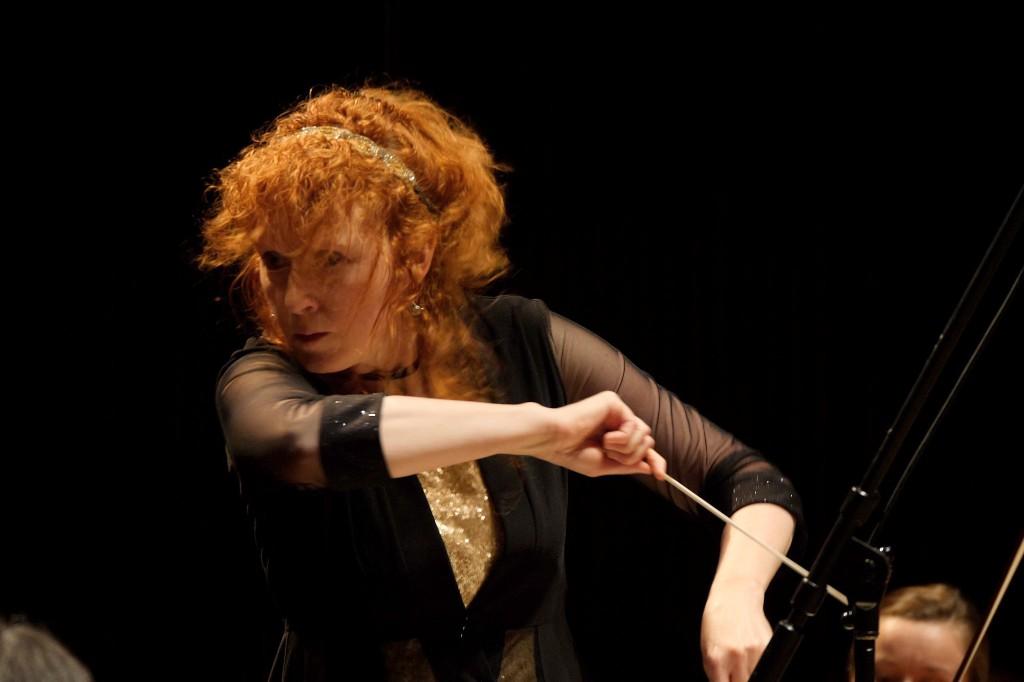 The Cleveland-based baroque orchestra Apollo’s Fire was created in 1992 by a woman with a vision. Jeannette Sorrell envisioned an ensemble dedicated to the baroque ideal that music should evoke the passions in the listeners, and she felt strongly that the instruments for which the music was composed best evoked those passions. So began thirty years of exploring the baroque canon afresh, as well as veering off the beaten path to lesser-known repertory of the period; moving forward to Mozart from an earlier perspective than the usual orchestral one; going backin time to medieval music; and moving sideways into the traditional music world, both religious and secular. This hour, we’ll celebrate their many accomplishments, and we’ll sample their 2022 recording O Jerusalem!