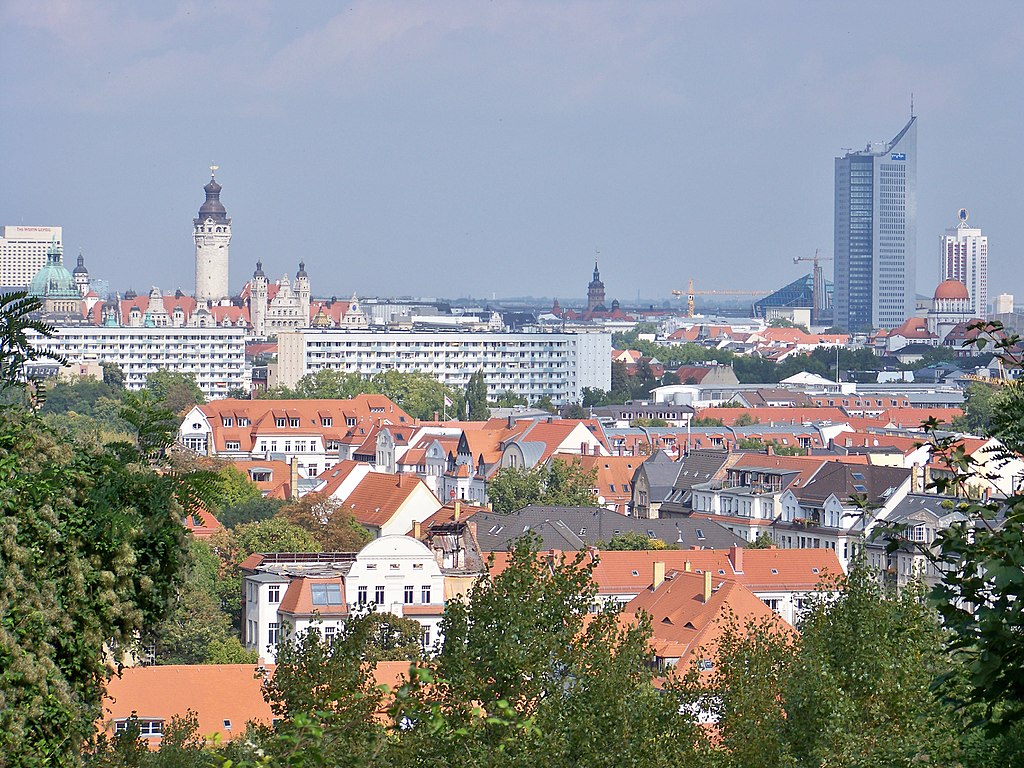 A contemporary photograph of the city of Leipzig. (Wikimedia Commons)

Enlightenment philosopher Gotthold Ephraim Lessing said, “I'm coming to Leipzig, to the place where one can see the whole world in miniature.” This week on Harmonia, a bit of time travel to that city in Saxony, with music from over 400 years of Leipzig church and city life, including works written for the Thomaskirche and for the town council. Then we’ll travel east, to Warsaw, to hear music for the House of Vasa in our featured release Marcin Mielczewski, from a recording by The Sixteen.

Today, when music lovers think of Leipzig, we remember it first as the place associated with Bach and Mendelssohn, and later, a city where Mahler wrote his first symphony. Leipzig has a long history of vibrant musical activity: an organ was built there as early as the mid-15th century, and the Thomaskirche, or St. Thomas Church, has been a home for prominent music directors for centuries. We’ll begin with music from late Renaissance composer Sethus Calvisius. Noted for his contributions to astronomy as well as music, Calvisius’s Opus Chronologicum opened up exploration of the night sky through his records of nearly 300 eclipses. We’ll listen to two pieces by Calvisius: “Deus sator mortalium” and “Praeter rerum seriem,” performed by a mixed ensemble of singers and organ with 17th century brass, woodwinds, and strings.

Here’s some much earlier music that would have been heard in this corner of Saxony. Built adjacent to the Thomaskirche, the Thomasschule trained young musicians at a singing school as early as the 13th century. This is “Alleluia: Vox exultationis” from the Mass for the Dedication of a Church from the St. Thomas Gradual.

Ensemble Amarcord sang the Alleluia from the St. Thomas Gradual — music from around 1300.

Welcome back! This hour, we’re walking through the streets and churches of Leipzig. Later, we’ll hear Polish music from our featured release Marcin Mielczewski.

Johann Kuhnau is remembered today as the predecessor to Bach at the Thomaskirche. In addition to composing music for liturgical use, Kuhnau was an expert scholar and teacher, whose prominent students included Graupner and Heinichen. Still, Kuhnau’s time in Leipzig was not without difficulty. He saw wavering support from the town council and had to compete with Telemann and Fasch for students and public attention. We’ll hear three versus, or sections, from a chorale cantata by Kuhnau that translates to “Whatever my God ordains is right.”

Three versus from Johann Kuhnau’s hymn of consolation, “Whatever my God ordains is right.” The vocal ensemble Opella Musica, with instrumentalists of Camerata Lipsiensis, were directed by Gregor Meyer.

As mentioned in reference to Kuhnau’s struggles, the town council in Leipzig held sway over the city’s musical activities. Johann Sebastian Bach is known for his 200 sacred cantatas, but he wrote several secular cantatas as well, some specifically for the town council of Leipzig. We’ll hear music from one of these cantatas, “You gates of Zion.” Bach wrote this piece for Ratswahl — a celebration to commemorate the inauguration of a new town council in 1727. Here are an aria and chorus from Cantata 193, reconstructed by the conductor of The Amsterdam Baroque Orchestra and Choir, Ton Koopman.

We move east now — from Leipzig to Warsaw — to explore music of Polish baroque composer Marcin Mielczewski. Mielczewski worked for the Vasa ruling family of Poland and Lithuania. We’ll hear the Kyrie and Gloria from Missa Cerviensiana, composed for choirs of voices and instruments, including a pair of violins and four trombones.

The Kyrie and Gloria from the Missa Cerviensiana by Polish baroque composer Marcin Mielczewski. Eamonn Dougan directed The Sixteen from their 2017 release Marcin Mielczewski. The CD comes from a series of recordings that bring music of the Polish baroque to modern listeners. We’ll conclude with “Canzona Terza for 3,” scored for two violins, bassoon, and basso continuo.

The Sixteen performed “Canzona Terza for 3,” by Marcin Mielczewski.