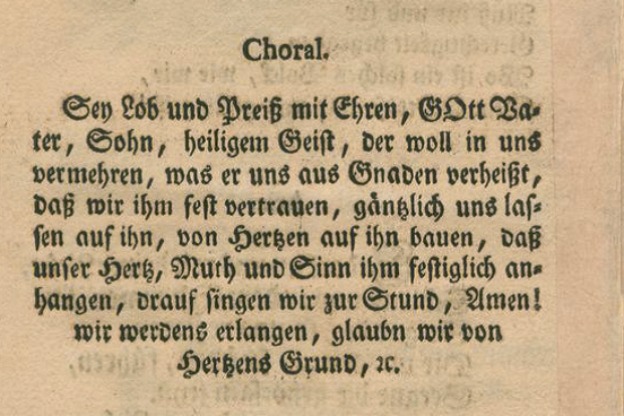 The three cantatas included on the Bach Collegium Japan CD, were all written in 1731. All four of the cantatas included on the CD from Collegium Vocal Gent originally date from 1723, the very year that Bach started working as Cantor of St. Thomas Church in Leipzig. The other thing these 1723 cantatas have in common is their anonymous texts. While we do know scripture sources as well as the chorale stanzas that Bach took from the Lutheran hymn book, the authors of the remaining poetic texts are unknown. And it’s through these anonymous texts that Bach takes the listener on a musical journey through the human condition: while often touching on humanity’s valleys of darkness and shadow, there always seems to be hope in Bach’s music, like in the title track of Collegium Vocale Gent’s recording, Ach Süsser Trost! A translation of this recitative text reads: "Ah sweet comfort…now I gladly lay with all my heart, my cares beneath my pillow, and may be satisfied with this for my comfort."

Bass, Peter Kooij, and soprano, Hana Blažíková both appear as soloists on each of the recordings featured today.  I adore both these singers, especially when I get to hear them together singing some of the best love duets of all time. But these love duets aren’t depicting romance between a man and a woman; instead, the dialogue is between Jesus and the Soul. Drawing on texts from Song of Solomon, one of these duets from Cantata 140 is accompanied by obbligato oboe. The other is with a piccolo violin—an instrument with tunings a third higher than a usual violin.

One of the most wonderful things about Bach cantatas is the composer’s display of ingenuity and the great diversity of compositional texture, sonority, instrumentation, form, character, you name it!  We hear Bach’s innovation of instrumental and vocal texture perhaps most clearly in solo movements. An example is the alto aria from Cantata 46. Here, Bach scores a pair of recorders, and 2 unison oboes da caccia to accompany the alto solo, performed with Bach Collegium Japan by Damien Guillon.

The text of this aria speaks of comfort and protection, like a shepherd gathering his sheep. The caccias and recorders seem a fitting choice for this pastoral image.  But those fitting pastoral colors stand in stark contrast to Bach’s instrumental choice for Cantata 112, which is based on perhaps the most pastoral text ever: Psalm 23, “The Lord is my Shepherd.” Taking the form of a five-voiced hymn from around 1530, Bach’s version with Cantata 112 must have taken his first listeners by surprise. Defying pastoral tropes, Bach instead opens the piece with a horn fanfare.