Frere Jacques. Row row row your boat. Sumer is acumin in. Dona nobis pacem. It’s great fun to sing rounds, in which a voice starts a song, and then a new voice starts the same song when the previous voice gets to a certain word. This week we’re going to hear a sampling pf renaissance rounds, including the type of round called a canon—c-a-n-o-n, with one “n,” not to be confused with the large heavy device used to blow things up.  Plus, music for voices and viols collected by a 16th century English clerk, on our featured release by the Marian Consort and the Rose Consort of Viols.

Rounds, or canons, where one voice follows another at a specific time interval, have been written down since the appearance of the “Sumer canon” in 13th-century England. They persist in the renaissance in all sorts of musical sources and circumstances--and that is our subject, in this edition of Harmonia.

Here is a sacred motet by Dufay, in which you can hear the top two voices singing exactly the same material. Though the voices start together, the second voice makes the first several notes longer than the top part, so the voices separate into a canon that gets further apart as other long notes in the piece are also sung longer by the second voice.

Cantica Symphonia, Giuseppe Maletto, director, sang Dufay’s Inclita stella maris from their 2004 Glossa CD Quadrivium.  It’s fun to be able to hear the canon between the two voices, but even if it’s not audible, it’s a beautiful motet to the Virgin Mary.

In England a quarter century later, the music we have for professional singers is often rhythmically complex, even when the round itself was a straightforward one, as we hear in this piece by the composer whom we only know as Pycard:

The Blue Heron Renaissance Choir, under the direction of Scott Metcalfe, from their independently-produced CD “Christmas in medieval England.” That was Pycard’s “Gloria,” from the Old Hall Manuscript.

As the century progressed and musical notation became a bit more standardized throughout Europe, canons of this sort were still enjoyed. Josquin des Prez used them with great technical skill--for instance, in the final piece in the very first book of printed polyphonic music, Petrucci’s Odhecaton Canti A. In this piece, Josquin takes two voices of the popular tune Fortuna desperata, places a third part beneath them, and gives us slightly mysterious instructions that say “Petrus and Johannes are running

at the point.” By this, he means that the second voice of the canon enters on the dot of the first note in the first voice, so the voices are incredibly close to each other throughout. Could this be the result?

Josquin also makes use of double canons, so that two separate melodies can generate a four-part piece, as in this one.

Joshua Rifkin directed the Nonesuch Consort in Josquin’s song Baisez moi, or as they would have said in the 15th century, Baisez-mweh,  on their 1972 Nonesuch release entitled Chansons, frottole & instrumental pieces.

Josquin’s music was famous long after his death in 1521. The music printer Tielman Susato published a book of Josquin’s songs in the mid-sixteenth century, in which two more parts were added to Josquin’s four part music. In the case of this piece, the addition of one more line to the already-existing two resulted (for better or worse!) in a triple canon, and therefore a 6-part piece.  Considering the implications of the French word “baiser,” which could refer to something a bit more adventurous than kissing, we might smile at this rather romantic, and very beautiful, interpretation of the same song that we just heard in four parts, now in six.

The Kings Singers interpret Josquin’s Baisez moi, or in 15th century French, baisez-mweh, in its 6-part setting on their RCA Victor Red Seal album Renaissance : the music of Josquin Desprez, from 1993.

In the musical notation of the late 15th century, it was possible for a half note to contain either two or three quarter notes, or a whole note to contain either two or three half notes, something that our modern notation no longer allows. Think about what could result from that!  It was possible for a clever composer to write a canon in which all the voices start together, either on the same pitch or different pitches, but some use a 3-beat half or whole note, and some use a 2-beat half or whole note. That would make the two voices travel at different speeds, thereby creating something known as a “mensural canon.” Josquin offers a brilliant example of this in one of his two masses on the pop tune L’homme armé, in the second of the three iterations of the “agnus dei.” The three voices begin the same music simultaneously at three different speeds, on three different pitches. The middle voice moves the slowest, beginning a fifth above the bottom voice which is somewhat faster, and the top voice, beginning an octave above the bottom, moves the fastest of all.

Now that’s tricky, and it’s difficult to sing (and imagine conducting it!) without an understanding of the renaissance idea of the long beat or tactus, something that everyone can count together even though they divide the long beat differently, depending upon which part they’re singing.

It’s a complicated idea, and one that’s difficult to notate in our modern notation. Josquin’s music is part of a continuum that had its roots a bit before his time with a composer whom he admired enough to compose a beautiful elegy upon his death, Johannes Ockeghem. We’ll hear a canonic tour-de-force from Ockeghem, after a short break.

Welcome back to Harmonia. Ockeghem’s Missa prolationum was long regarded as a virtuosic technical and contrapuntal achievement, but intrepid singers willing to tackle it have found some beautiful polyphony in its carefully constructed notes. The opening and closing Kyries of the mass start slowly, then the lines become clearer as they go a bit faster: you may be able to hear two exact canons creating four voices.  What happens at the opening is that all four voices are still singing in canon, but, as in the Dufay piece we heard earlier, the first couple of long notes set the two voices apart. So in this case, we get two lines of music creating 4 part polyphony. The Christe in the middle is also a canon, but the voices are completely separate, so the first two voices sing, then the other two repeat what they’ve just done, a step higher.

We’re listening to the canons, or imitative passages similar to what we might call “rounds,” in a piece called Missa Prolationum by Johannes Ockeghem, in this case from a recording by the Clerk’s Group, directed by Edward Wickham. Ockeghem’s composition explores canons not only at the unison, as we just heard, but at the whole step, third, fourth, fifth sixth and seventh, for heavens’ sake! And there are all sorts of different canons, some overlapping, some successive. Let’s hear the final Agnus dei of the mass, the one that ends with the words “grant us peace.” As you will hear, only two voices start, and when they get to a certain point, the other voices join in, a classic canon, except that each voice is composed in a different meter, so all four voices only sound simultaneously about a dozen times in the whole piece.

Edward Wickham once again directs the Clerk’s Group in an excerpt from the Agnus dei of the Missa Prolationum on their album of the same name from Gaudeamus in 1995. It doesn’t get much more complex than that, even in contemporary music, and yet, it’s still captivating polyphony, don’t you think, even if you have no idea what’s going on.

On the other hand, the straightforward canon continued to appeal to composers, and toward the end of the 16th century William Byrd used canons that are obvious, such as this one, in three parts.

Ah, but this is William Byrd--he can do even better than that. Let’s listen to this piece that he calls “Fantasia: 2 parts in one in the fourth above.” So one of the parts is going to be played in canon a fourth higher than the written part.  But I challenge you to tell which two parts are in canon. Even music students often can’t hear this one until they’re told. Let’s give it a try!

Did you hear that the top two parts were in canon throughout that piece? All the parts imitate loads of the musical licks, as it were, especially at the beginning of each new phrase, and it only becomes clear later in the phrase that it’s the top two parts in canon, with the lower of the two being the “leader” and the one a fourth above the “follower.” That was William Byrd’s Fantasia (Two parts in one in the 4th above) as played by Phantasm on their 2010 Linn CD Complete Consort Music.

Canon 6-in-one, by William Byrd, from a CD by the Marian Consort and the Rose Consort of Viols called “Loquebantur: Music from the Baldwin Partbooks.” Conveniently, the “Loquebantur” CD is also our featured release this week, providing us with a very smooth transition.

The partbooks in question are called “The Baldwin Partbooks” because they are part of a collection of music that was gathered in the last part of the 16th century by a man named John Baldwin, who was a lay clark at St. George’s Chapel in Windsor and eventually became a “Gentleman of the Chapel Royal.”

The collection is particularly interesting because it gives us a window into the personal musical preferences of a person at this particular time and place – a kind of late 16th-century mix-tape, as it were.

Elway Bevin’s setting of the popular tune “Browning,” played by the Rose Consort of Viols, from the Delphian label CD Loquebantur: Music of the Baldwin Partbooks.

It seems fitting to end our feature on the Loquebantur CD with the title track: Thomas Tallis’s  Loquebantur variis linguis, a responsory set as a 7-voice motet for Pentecost. This is the Marian Consort, directed by Rory McCleery.

Loquebantur variis linguis, a motet by Thomas Tallis, from our featured release this week on Harmonia, a CD called “Loquebantur: Music from the Baldwin Partbooks,” released on the Delphian label by the Marian Consort, directed by Rory McCleery, and the Rose Consort of Viols. 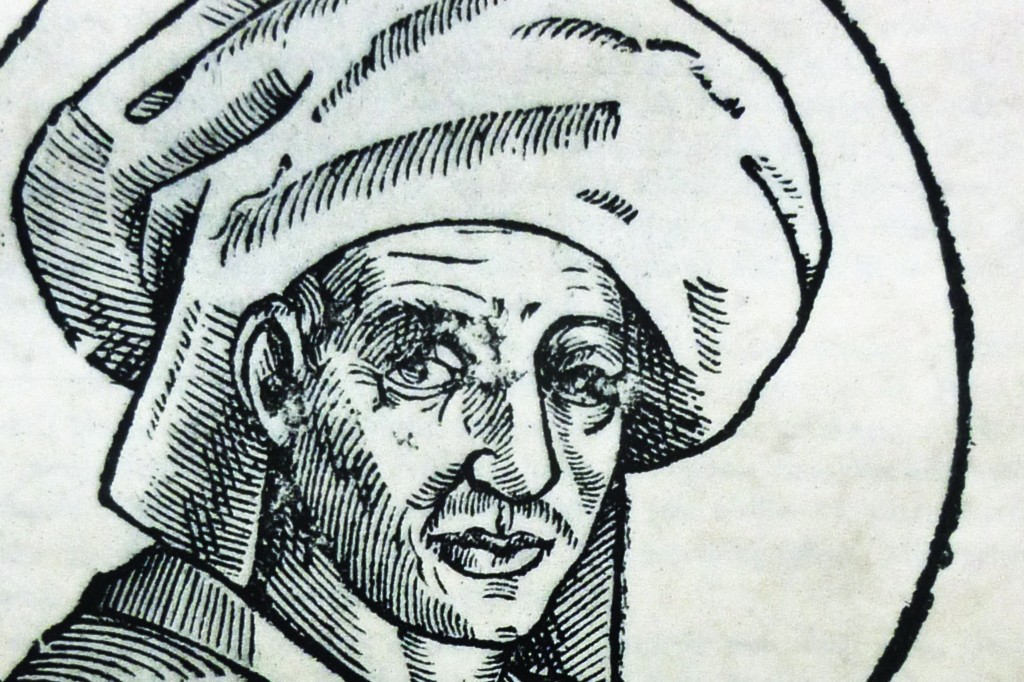 From a woodcut of Josquin des Prez, 1611. (Public domain, uploaded by Adrian Michael on Wikimedia Commons)

This week on Harmonia, we’re going to hear a sampling of renaissance rounds, including the type called a canon, performed by Blue Heron, Kings Singers, Nonesuch Consort, Fretwork, and more.

Plus, music for voices and viols collected by a 16th-century English clerk is on our featured release by the Marian Consort and the Rose Consort of Viols.