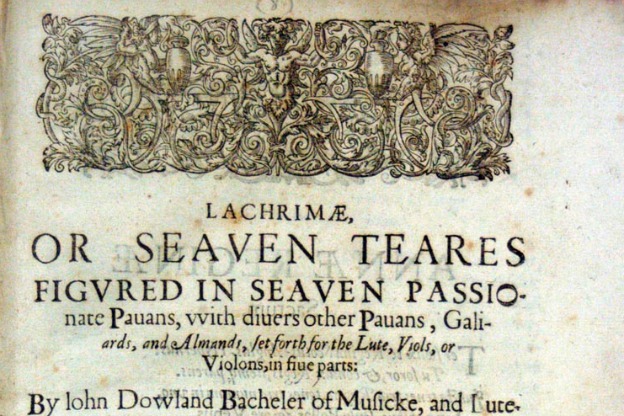 John Dowland was a world traveler. The famous composer hailed from either England or Ireland, (Both claims to his nationality have been made!), and Dowland had a serious travel itch that he scratched by heading off to France while still a teenager. From France, Dowland moved to Germany, Italy, and eventually landed in Denmark where he became the highest paid musician in the Danish court of King Christian.

Arguably, Dowland’s most enduring piece is his pavan Lachrimae and that piece provides a good picture of just how interconnected all these composers were. The Lachrimae found its way into oodles of manuscripts and prints in many different solo and ensemble arrangements by various composers who borrowed the tune for themselves. Several versions, along with other Dowland songs are performed on this CD.  Simone Eckert directs music on this recording that features performances by a consort of viols, along with tenor Jan Kobow and lutenist Ulrich Wedemeier.

The configuration of a solo singer with lute accompaniment  is the way that most of us are accustomed to hearing Dowland songs performed. Yet, there surely was, or in fact is, great freedom in the performance of these works. And our second featured recording, a 2012 CD from the Alpha label, offers performances of these works by multiple singers. Recordings of these songs made with more than one singer are certainly in the minority, so it is enjoyable hearing them presented this way.

One look through the CD booklet that comes with this disc and you’ll be struck by the youth of the talent represented: a new generation to whom this music still speaks. Hang on all the way to the end of the disc and you’re in for a surprise bonus track—a version of Trent Reznor’s song, "Hurt," first released by the industrial rock band, Nine Inch Nails on their 1994 album, Downward Spiral. Reznor’s song has since been covered by lots of other artists, most famously Johnny Cash. But what’s interesting about hearing it tagged on at the end of this Dowland recording is that after a good hour of melancholy English Renaissance music, "Hurt," actually doesn’t seem so out of place. The song is presumably covered by Thomas Dunford himself.