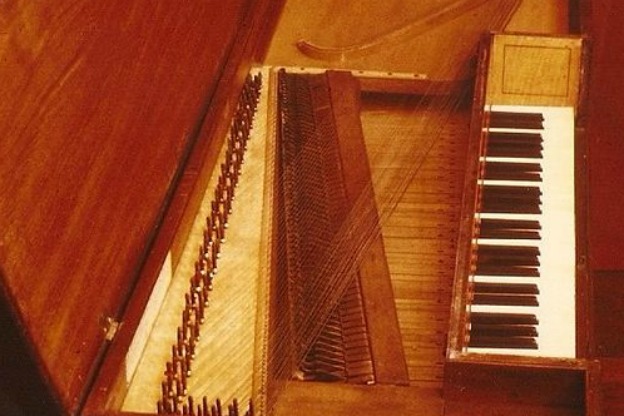 The transitional baroque-to-classical composer Johann Wilhelm Hässler is pretty well unknown except to keyboard specialists. His music is championed by only a few, and at the forefront is Italian keyboardist, Michele Benuzzi.  Although he made a recording of miscellaneous Hässler pieces several years ago, Benuzzi has just released a far more extensive, four CD set of the composer’s music, most of it for solo keyboard.

Hässler (not to be confused with the earlier Renaissance German Hassler family of musicians who spelled their name without an umlaut) was among the sweep of 18th century musicians that history forgot, overshadowed by the greats: Bach and his sons, Mozart, and Haydn. But Hässler did ok for himself. He composed and publish a fair amount of music, he toured, he concertized, and he held posts both at church and at court. Hässler spent a good portion of the end of his career in Moscow where he enjoyed considerable popularity as a teacher and performer.

Born in 1747, three years before J.S. Bach died, Hässler’s career straddles the high Baroque and the early Classical era.  Thus, the type of instrument that Hassler’s works should be played on is an interesting question. Harpsichord? Clavichord? Fortepiano? Composers, including Hässler, often considered these instruments interchangeable, designating compositions for them under the more generic title, clavier. In addition to organ, Hässler would have played all of these instruments.

The main differences between the types of keyboards has to do with mechanical action. A piano has hammers that strike the string, a harpsichord has a mechanism that plucks the string, and a clavichord has a tangent that comes into direct contact with the string and stays in contact even after the initial impetus.

For his recording, Benuzzi uses all these instruments:  clavichord, harpsichord, and two types of fortepianos—an early Silbermann model that would have been in use during Bach’s time, and a later Broadwood square piano. The variety of instruments is most welcome as this is a four disc set of mostly keyboard music by one composer!  In his liner note, Benuzzi mentions that he let the music suggest the choice of instrument.  Clearly, some of Hässler's music works well on the more sustained and expressive sound of fortepiano or clavichord, while others certainly seem more idiomatic for the harpsichord.

A Broadwood square and a Friederici clavichord

On his recording, Benuzzi plays the sonata in B flat from a 1780 collection that Hässler called ‘Leichte Sonaten’ or light sonatas aimed toward an amateur players market. Benuzzi’s choice of a Broadwood square piano for this piece is appropriate as the compact instrument never really found its place in the concert hall, but was however enormously popular in people’s homes at the end of the 18th and into the 19th century.

Benuzzi performs another sonata from the same 1780 collection on the clavichord.  Like the Broadwood square, this softer clavichord—a copy of an instrument built in 1765 by Christian Gottfried Friederici—was most suited for performances in small and intimate spaces.

Almost everything that Hässler wrote was for keyboard. However, the appendix of Hassler’s 1779 set also contains five songs and a violin sonata. For these works, Benuzzi is joined by soprano Francesca Cassinari and violinist Matteo Zanatto.