Welcome to Harmonia…I’m Angela Mariani. This hour, we’re exploring opposites. First, music of Jean Mouton, priest, celebrated church and court composer, and revered teacher, whose music has been described as “smoothly flowing with melody.” 500 years after his death, we commemorate Mouton’s life and works. In contrast, later in the hour, our featured release is Carlo Gesualdo: La Légende Noire, dissonant and darkly beautiful music composed by a titled, complex, and troubled individual, who literally got away with murder.

The Lord’s Prayer, Pater Noster, by Flemish composer Adrian Willaert. That was New York Polyphony from their 2021 BIS release And the Sun Darkened: Music for Passiontide.

As a young man, Willaert had been studying law before he shifted to music, going on to become one of the most versatile and influential musicians of Renaissance Europe, and founding the Venetian School. / Why the switch in career paths? Simply…he met Jean Mouton.

Renaissance music lovers flock to the music of Josquin des Pres—and with good reason. Josquin’s influence on his contemporaries as well as later composers along with his creativity and command of writing for multiple voices is exceptional.

For a time, many works by Jean Mouton were attributed to Josquin. Perhaps this is why they survived. The theorist Heinrich Glarean called Mouton’s music “facili fluentem filo cantum”– smoothly flowing with melody. Mouton was also known for his “studio ac industria,” his hard work and application. Let’s hear Mouton’s “Nesciens mater” and “Salve Nos Domini.”

Mouton’s early life is shrouded with mystery—we don’t know much about his education or childhood. We do know he died in 1522, and so today we remember Mouton, five centuries after his passing. Let’s begin with a toast, taking the words from his own welcoming meal piece, “Bona vita, bona refectio”:

Mouton was associated with the royal family—Queen Anne of Brittany and her third husband Louis XII, later king of France. Although Mouton was never the primary court composer for the royal family, he did regularly provide music for important occasions, like christenings, weddings, battle victories, and funerals. At the death of Queen Anne, Mouton composed “Quid dabit oculus nostris,” which laments her death using texts from her funeral sermon: [quote]

Brittany, why do you weep? Music, why are you silent?

France, why have you donned mourning garments, […]

Beat your breasts, you nobles, and say: May Anne rest in peace!

Petrucci’s 1501 publication Harmonice Musices Odhecaton, which translates roughly to One Hundred Polyphonic musical pieces, made printed music available to a wider audience than ever before. It’s a who’s who of European, and especially Franco-Flemish, composers. Mouton made it in with a few tunes, along with Josquin des Prez, Johannes Ockeghem, Antoine Busnois, Jacob Obrecht, among others. We’ll hear “Jamais” (Never) by Jean Mouton.

Mouton is perhaps best known today as Adrian Willaert’s teacher. As with Mouton, we don’t know much about Willaert’s early life. Willaert went to Paris to study law, but quickly changed course to work with Mouton, serving under the same patron as his teacher: Louis XII and later François I. We’ll hear music by Willaert, “Sacro fonte regenerate.”

Let’s swing in quite the opposite direction now to a composer whose style and demeanor are dramatically different than Mouton’s.

Carlo Gesualdo, prince of Venosa and Count of Conza was a paradox—his personal exploits were as twisted as his chromaticism. Adrien Mabire and ensemble La Guilde des Mercenaries explore Gesualdo’s complex works in their 2021 Nouveau recording Carlo Gesualdo: La Légende Noire. We’ll hear “Se la mia morte brami” (if you long for my death, cruel one, happily I shall die).

Gesualdo is a notorious character in the history of western European music because he infamously and brutally murdered his unfaithful wife and her lover. He supposedly was wracked with guilt for the rest of his life, and this in turn gives rise to tales of him ordering his servants to beat him, and other morbid stories. Gesualdo is sometimes one of the few composers whose name my students remember from a music history class, and we can guess why. Should we perpetuate this sensationalism? He’s not the only composer who murdered his wife - Bartolomeo Tromboncino comes to mind – but everyone is fascinated by Gesualdo. In the Wikipedia article about Gesualdo, we find this quote from Alex Ross, writing in 2011 in the New Yorker: quote, “If Gesualdo had not committed such shocking acts, we might not pay such close attention to his music. But if he had not written such shocking music we would not care so much about his deeds. Many bloodier crimes have been forgotten; it’s the nexus of high art and foul play that catches our fancy.” End quote.

Here's one of Gesualdo’s most moody and famous pieces,  “Moro, lasso, al mio duolo” (I die, alas in my suffering).

We’ll close with the madrigal “Ardo per te, mio bene,” I burn for you, my love,” music by Gesualdo.

This edition of Harmonia was written by Sarah Huebsch Schilling. 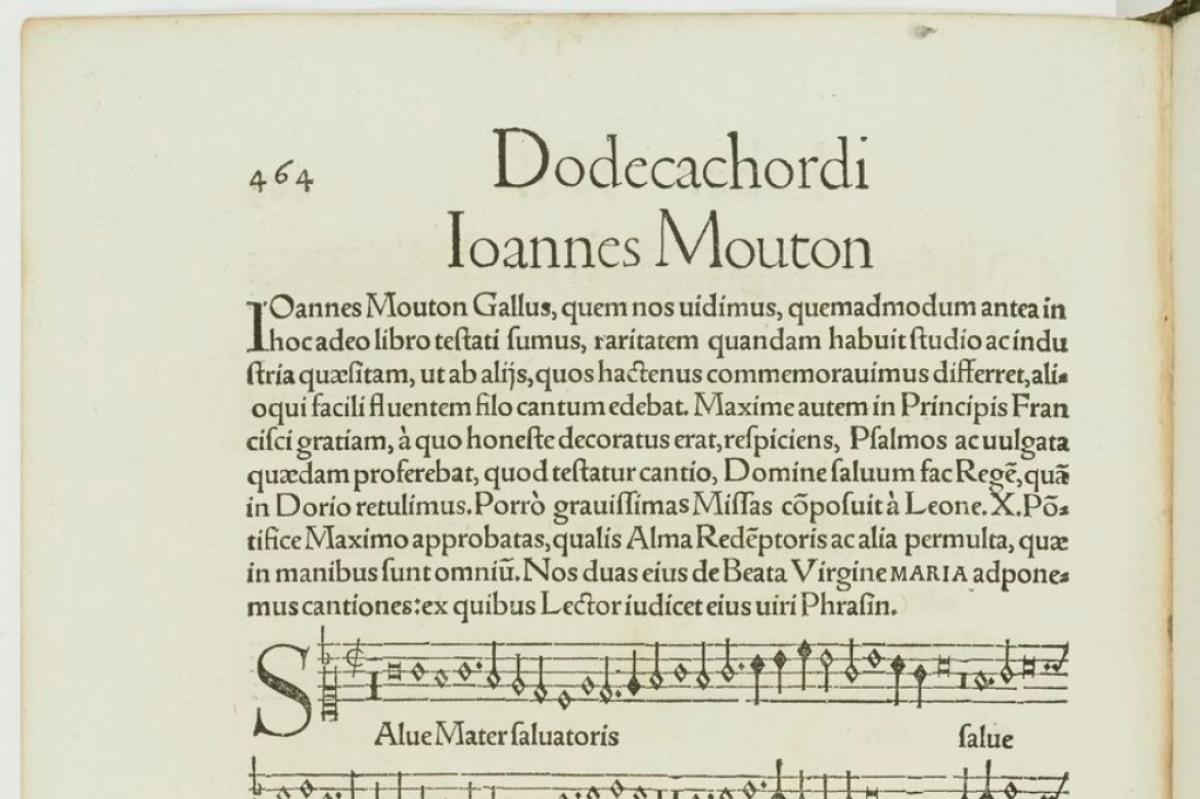 This hour, we’re exploring opposites. First, music of Jean Mouton, priest, celebrated church and court composer, and revered teacher, whose music has been described as “smoothly flowing with melody.” 500 years after his death, we commemorate Mouton’s life and works. In contrast, later in the hour, our featured release is Carlo Gesualdo: La Légende Noire, dissonant and darkly beautiful music composed by a titled, complex, and troubled individual, who literally got away with murder.