Welcome to Harmonia . . . I’m Angela Mariani.  “Je suis desheritée” - literally “I am dispossessed” is a love song, despite what you might assume from its first three words. This hour, we’ll hear how Renaissance composers of the likes of Claude LeJeune, Orlando di Lasso and Nicolas Gombert - used the song as the basis of masses, songs, and instrumental fantasies. After that, music from our featured release, Ensemble Dragma’s 2020 Ramée recording entitled Song of Beasts:Top of FormBottom of Form Fantastic Creatures in Medieval Songs.

The Ensemble L’Amoroso, directed by Guido Balastracci, played two 17th-century French pieces for small ensembles of viols - first an Allemande for 3 viols by Henry du Mont, then a fantasie for 2 viols by Nicolas Metru.

Welcome to Harmonia . . . I’m Angela Mariani. This has been showing up at the beginning of segment A in the last couple of scripts and I’ve been taking it off. Hope that’s OK. I only say that at the beginning of the show. The News Hole happens at 1 minute into the show, so the Billboard will be heard anyhow.

On Harmonia this hour we’re listening to a song that went viral-- in a very sixteenth-century sort of way! “Je suis desheritée” – which literally means “I am dispossessed.”

One particular setting of this timeless story—a simple 4-part chanson—caught the ears and imaginations of both lesser- and better-known composers from Le Jeune to Lassus, Gombert to Palestrina. The song isn’t complicated; it’s simple and beautifully balanced. Either just the melody or the entire 4-part texture, in the clever hands of these composers, metamorphoses into new songs, and instrumental and sacred music.

In the song, the lover laments:

“I am dispossessed because I’ve lost my sweetheart
He has left me alone full of tears and sorrow.
Pretty nightingale of the woods, go immediately
And tell my sweetheart that I'm tormented for his sake.”

(Admittedly, not a wildly original conceit, in fact it’s one of the oldest stories.) There is music in its original language; even if you don’t know what individual words mean, you can hear rhythm and rhyme in the French. The music to which the poetry is set was probably composed by Pierre Cadéac, though it was attributed to Johannes Lupi in several early sources…but honestly, what’s in a name? The music’s the thing, so let’s see whether you get a feel for why this modest 4-part song went viral, (if that term hasn’t now taken on a very different affekt…)

Going viral was a different process in the sixteenth century than now, since there was no such thing as a sound recording, much less an “interweb.” Music was popularized both by live performance and on paper. By the mid sixteenth century, there was tons of music printing going on, so a chanson could travel widely, as this one did, to those who could read music. Composers seized the simple song and made it their own.

One of the most prolific and significant composers of the second half of the 16th century, Claude LeJeune, turned the humble tune into a rather complicated 6-part vocal piece with the tune in canon with itself.

In 1610, Eustache DuCaurroy [U-stahsh dü cor-wah) contributed a 6-part instrumental fantasie, losing the words altogether, but elaborating on the music.

A different way to pay tribute to a beautiful tune is to set other words to it. This versified Lord’s Prayer, in which “Our father who art in heaven” becomes “Our father God celestial,” is set by an anonymous Scottish composer as a consort song for viols and voice in 3 charming verses.

That was Ryland Angel and Parthenia performing “Our father God celestial,” set to the tune of Je suis desheritée. Our song is pretty well intact in its original four-part setting but set with a metrical version of the Lord’s Prayer.

Je suis desheritée very quickly found its way into masses, as did many other secular songs of the early C16. Let’s listen to the five movements of the Ordinary of the Mass by three different composers, each using the Je suis desheritée melody to their own ends.

We’ll begin with a Kyrie by Nicolas Gombert, whose dark, rich sounds remind us of Johannes Ockeghem - in fact, Ockeghem’s Missa Mi-Mi is quoted at the beginning of Gombert’s Missa ‘Je suis desheritée’.

The Kyrie of Nicolas Gombert’s Missa ‘Je suis desheritée’ was performed by the Pro Musica Köln, directed by Johannes Homberg.

­­­­­­The mid-C16 French composer Jean Maillard composed a classic “imitation mass” (what used to be called a parody mass!) on the tune. An imitation mass uses all the parts of a polyphonic work, not just the melody, broken up into points of imitation that elaborate on each phrase. The relationship is usually clearest at the beginning, middle, and end of each movement. See whether you can sense our song in this Gloria: from Maillard’s 4-voice Missa Je suis desheritée.

­­­­­­­­­­­­You can hear highlights from recent and archival concert recordings of early music on ​Harmonia Uncut ​-- our biweekly podcast, curated and hosted by Wendy Gillespie. Listen online at harmonia early music dot org and through iTunes.

Welcome back. For the remainder of our patchwork mass based on the song Je suis desheritée, we visit the music of a giant of late C16 European music: Orlando di Lasso. Here is the Credo, Sanctus, and Agnus Dei from Lasso’s 4-voice Missa Je suis desheritée.

Let’s turn to our featured release, the Ensemble Dragma’s 2020 Ramée recording entitled Song of Beasts: Fantastic Creatures in Medieval Songs, designed to be a musical equivalent of the medieval bestiary, in which both mythical and real beasts are represented.

The ensemble takes its name from a medieval musical note called a dragma that can have different rhythmic interpretations depending on its context; the members of the ensemble all trained at the Schola Cantorum Basiliensis, and their mission is to explore the connections between monody and polyphony and the common ground between instruments and voices.

Here’s a madrigal -- in the 14th century sense of the word “madrigal” --  sung as a vocal duet, about a phoenix that has transformed into a turtledove to fly with love through the beautiful orchards.

The Ensemble Dragma performed Jacopo da Bologna’s Fenice fu from our featured release of the week, Song of Beasts:Top of FormBottom of Form Fantastic Creatures in Medieval Songs. Along with the music, the CD includes a film, slightly longer than the CD itself, in which we get to see creatures depicted in contemporary carvings on church pews, ivories, or in the bestiaries popular in the period.

All three members of Dragma are accomplished instrumentalists, so we get to hear vielles, lute, and harp as well as voices. Here’s an anonymous 3-part ballata called “Deh tristo mi topinello.” It’s about a hungry and sad “wingless bat,” a.k.a. a mouse, with rather luxurious tastes. It dreams of tortelli, sausage, and fat capons, but, alas, must settle for coarse black bread, radishes, and chickpeas.

We’re listening to our featured recording, Song of Beasts, and that was an anonymous ballata called Deh tristo mi topinello.

Let’s stick with texts about mythical beasts and end with the ballade Phiton, Phiton, by Magister Franciscus. Like Gombert, Franciscus quotes the first part of a Machaut song about the same mythical python. He recasts the mythological serpent slain by Apollo so that the “very venomous beast“glorifies Phoebus, the Greek god of light. And Phoebus was the nickname of Gaston Fébus, the count of Foix, a great patron of the arts among many other characteristics, to whom a significant number of pieces are dedicated.

A song by Magister Franciscus whose title translates to “Python, python, most venomous beast,” performed by the trio Ensemble Dragma on our featured release, the 2020 Ramée Song of Beasts:Top of FormBottom of Form Fantastic Creatures in Medieval Songs.

We welcome your thoughts about any part of this program, or about early music in general. Contact us at harmonia early music dot org. And, you can follow our Facebook page and our​ updates on Twitter by searching for Harmonia Early Music.

Thanks to our studio engineer Michael Paskash, and our production team: Aaron Cain, Wendy Gillespie, LuAnn Johnson, and John Bailey. I’m Angela Mariani, inviting you to join us again for the next edition of Harmonia. 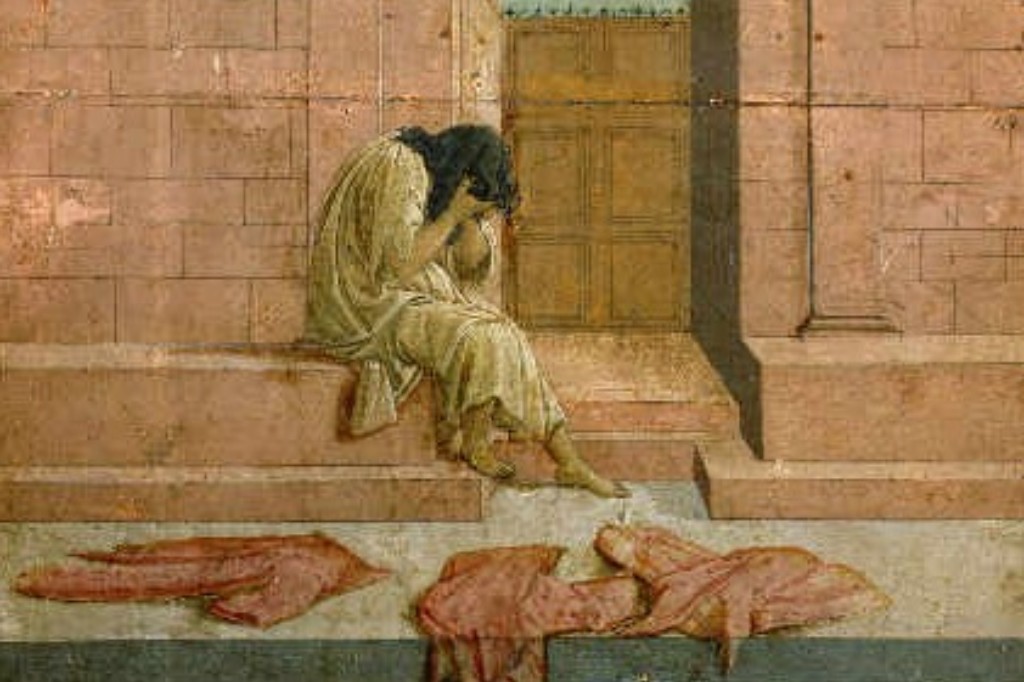 The Abandoned by Sandro Botticelli, 1495.

“Je suis desheritée” - literally “I am dispossessed” is a love song, despite what you might assume from its first three words. This hour, we’ll hear how Renaissance composers of the likes of Claude LeJeune, Orlando di Lasso and Nicolas Gombert - used the song as the basis of masses, songs, and instrumental fantasies. After that, music from our featured release, Ensemble Dragma’s 2020 Ramée recording entitled Song of Beasts: Fantastic Creatures in Medieval Songs.