Paradise, Heaven, and Arcadia may be the pastoral setting of many operas, but Hell, the underworld, and realms of evil are home to many of music’s darkest scenes. Often, characters are visited by demons from Hell, or are drawn into it through temptation, evil spirits, and sin. This hour, 17th and 18th century musical portrayals of evil spirits, Lucifer, and Hell. Later in the program, darkness turns to light in our featured release, Epiphany: Biber, Buxtehude, Kapsberber, & Bach, by Three Notch’d Road.

Orfeo convinces Caronte to allow him to enter the Underworld in search of his dead lover Euridice, in the famous aria “Possente Spirto, from Act 3 of Monteverdi’s L’Orfeo. The tenor was Furio Zanasi, with La Capella Real de Catalunya and Les Concert des Nations, led by Jordi Savall.

In the world of early Baroque opera, three of the most famous supernatural villains are the Sorceress and two accomplices in Purcell’s opera Dido and Aeneas. These “Wayward Sisters” open Act II by announcing their plans to bring ruin to Queen Dido and to Carthage, before disappearing along with dancing Furies while thunder rolls. Here’s the scene, performed by Les Art Florissants.

The Sorceress and her two witchy companions exit with a dramatic thunderclap, from Act 2 of Henry Purcell’s Dido & Aeneas, performed by Les Art Florissants, directed by William Christie.

Sorcerers also manage to get in the way of love in Lully’s opera Amadis. Louis XIV chose the theme for Amadis, which premiered in 1684. Not surprisingly, Louis XIV is also referenced in the opera. Here in Act 4, our hero Amadis and his lover Oriane are held captive on a dragon ship as demons from Hell dance.

We heard the prelude and demon scene from Act 4 of Amadis by Jean-Baptiste Lully. Christophe Rousset directed Les Talens Lyriques.

Evil in the baroque doesn’t end with evil spirits. In Handel’s Oratorio for the Resurrection of our Lord Jesus Christ, the devil himself appears, as a foil to angels, Mary Magdalene, and more. In scene 1, an angel argues with Lucifer, “you shall see how you yourself tremble on your knees at [Christ’s] great name!” Lucifer, in disbelief, argues, “I’ll turn Hell upside down…and bring war even to the Heavens!”

An Angel vs. Lucifer recitative dialogue, and Lucifer’s aria, “O, you dread powers of Erebus” from part I of Handel’s Oratorio for the Resurrection of our Lord Jesus Christ. We heard soprano Klaartje van Veldhoven, bass Mitchell Sandler, and Contrasto Armonico led by Marco Vitale.

Sometimes, the appearance of Hell or Lucifer isn’t so direct. If you’ve heard the phrase, “that is devilishly difficult” it might come from this piece by Giuseppe Tartini: The Devil’s Trill. In a letter, Tartini wrote, [quote]:

One night I dreamt that I had made a pact with the devil […] I [gave] him my violin to see if he might play me some pretty tunes […] I heard a sonata so unusual and so beautiful […] Immediately I seized my violin, hoping to recall some shred of what I had just heard – but in vain. The piece I then composed is without a doubt my best, and I still call it The Devil’s Sonata, but it falls so short of the one that stunned me that I would have smashed my violin and given up music forever if I could but have possessed it.

Bonaventura Cavalieri’s drama entitled Rappresentatione di Anima et di Corpo features a conflict between the Soul (a soprano) and Body (a tenor). It’s a play with music, but not quite an opera, although Cavalieri was known to have tried to take credit for inventing opera, and it’s not quite a “music drama” in the sense that Wagner would have used the term much later. In Cavalieri’s work, the soul and body are torn between good and evil while interacting with characters representing good council, pleasure, and intellect as well as choirs of angels in Heaven, damned souls, and blessed souls. The stage is set as Heaven, Earth, and Hell. In the opening of Act III, Hell opens and closes several times, tempting Body and Soul. We’ll hear the beginning of that sequence: the sinfonia, “Rise up Heavens,” “You who are down below,” and “Souls that rejoice in Heaven.”

The Sinfonia to Act III, and a dramatic scene with the mouth of Hell opening and closing, from Bonaventura Cavalieri’s Rappresentatione di Anima et di Corpo  L’Arpeggiata was directed by Christina Pluhar.

For our featured release this week we turn from our devilish pursuits of Hell music to something utterly opposite: a recording called “Epiphany: Biber, Buxtehude, Kapsberger, and Bach,” by the Virginia-based baroque ensemble Three Notch’d Road. They bring together Biber’s Rosary sonatas with unaccompanied works by J.S. Bach and chamber works by Johannes Hieronymus Kapsberger and Dietrich Buxtehude. We’ll start with Biber: “The Visitation,” Sonata in A Major from Biber’s Rosary Sonatas. 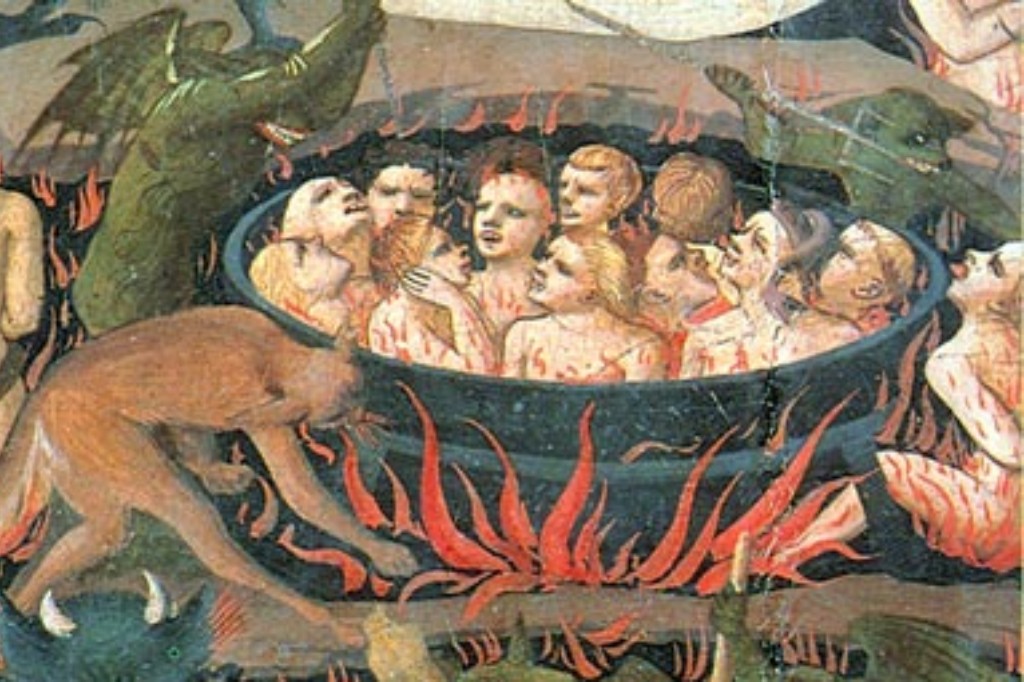 Detail from a panel of the alter piece The Last Judgement by Fra Angelico, c.1431. (The Yorck Project, Wikipedia)

Paradise, Heaven, and Arcadia may be the pastoral setting of many operas, but Hell, the underworld, and realms of evil are home to many of music’s darkest scenes. Often, characters are visited by demons from Hell, or are drawn into it through temptation, evil spirits, and sin. This hour, 17th and 18th century musical portrayals of evil spirits, Lucifer, and Hell. Later in the program, darkness turns to light in our featured release, Epiphany: Biber, Buxtehude, Kapsberber, & Bach, by Three Notch’d Road.